It was quite a surprise when we heard back in September, last year, that Microsoft was going to acquire Nokia’s Devices and Services unit for just $5 billion. And today, more than eight months after the announcement, the company whose name was once synonymous with “mobile phone”, gets officially acquired by the Microsoft behemoth. Just as a reminder, $7.2 billion is the price that Microsoft paid for the acquisition which includes Nokia’s patents portfolio, as well. The recently named Microsoft CEO Satya Nadella shares his input on this crucial moment for the evolution of both companies: 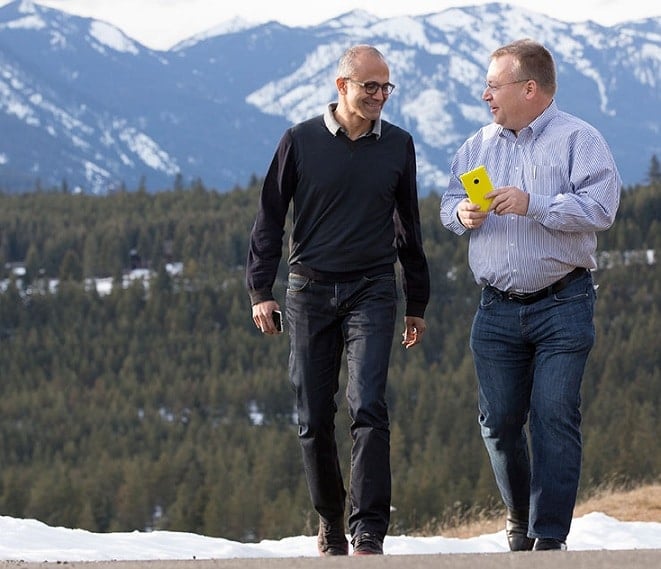 Today we welcome the Nokia Devices and Services business to our family. The mobile capabilities and assets they bring will advance our transformation. Together with our partners, we remain focused on delivering innovation more rapidly in our mobile-first, cloud-first world.

Microsoft acquires Nokia in a very important moment for both companies, as the former is more focused than ever on increasing its presence in the mobile world and the Finnish company is still struggling to get back at least part of its previous charisma. Microsoft has recently released the much awaited Windows Phone 8.1 with important improvements and Nokia has made a compromise and released a series of three devices running a forked version of Android. So, we can see that they are trying fresh approaches in order to rejuvenate their business operations.

As part of a recent shake-up in the top management at Microsoft, former Nokia President and CEO Stephen Elop will now be the executive vice president of the Microsoft Devices Group taking care of Lumia smartphones and tablets, Nokia mobile phones, Xbox hardware, Surface and other products and accessories. Microsoft also announce that Windows Phone is growing incredibly fast, with a 91 percent year-over-year gain. And with Nokia’s help, Microsoft will target the affordable mobile devices market, as markets in developed countries have apparently reached saturation.

The merger will have a big impact on Nokia’s employees, as Microsoft will transfer approximately 25,000 workers from around the world. The company also mentioned that Nokia’s factory from Masan, South Korea, and the factory in Chennai, India, will stay with Nokia. And here’s what Stephen Elop himself said on Nokia’s website:

At our core, we are passionate about building technology that will change the world. From the early vision of Microsoft of placing a PC in every home and on every desk, to Nokia connecting billions of people through mobile devices, we have empowered generations. But we could not have achieved any of this without our fans around the world. As Microsoft and Nokia Devices and Services come together as an expanded family, we will unify our passion, dedication and commitment to bringing you the best of what our joint technologies have to offer. From today onwards, the possibilities are endless. As now, we’re one!

So, we can see that Elop is highlighting the same idea which is currently known as the “One Microsoft” vision. It will be interesting to see what will be Nokia’s approach towards the Android ecosystem and what Windows Phone products they will release on the market.

Was this article helpful?
YesNo
TechPP is supported by our audience. We may earn affiliate commissions from buying links on this site.
Read Next
8 Best Malware Removal Tools for Windows 11 [2023 Edition]
#microsoft #nokia