TouchPico is a new interesting Indiegogo project that you should pay attention to. This is basically an Android-equipped pico projector which integrates an infrared pen that can be used on the touch interface it generates on virtual any surface. TouchPico is a smart hybrid between a mini Android PC and a handhelf projector that simulates the touch-screen experience with an infrared stylus. 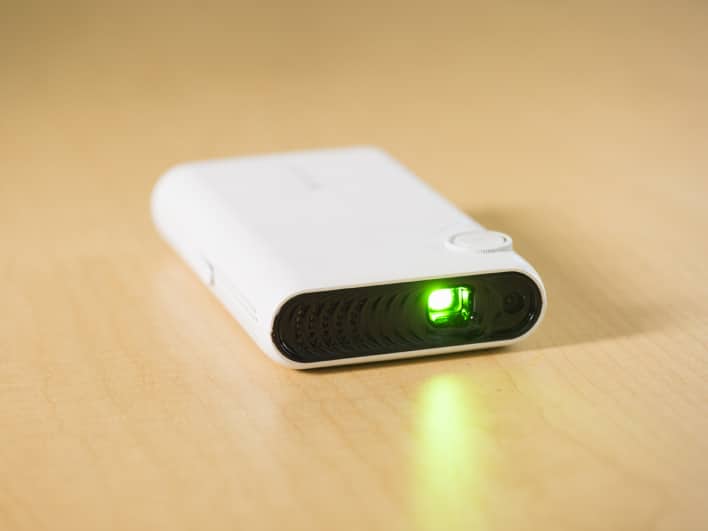 What makes this project stand apart is TouchPico’s infrared pen, which outputs an infrared signal that is read by a camera on the front of the projector when you press it against the projected surface. Thus, you can manipulate the projected screen and you can see for yourself in the demo how it’s being done.

TouchPico outputs a 854 x 480 display onto a screen or a wall and it’s paired with an Android 4.0 device running on a Rocketchip 1GHz processor with two cores. The device also comes wtih an HDMI port, just in case you want to use the TouchPico in a more traditional way.

So, you can basically download any app you want from the PlayStore and project it on your wall, whether it’s a comic book, game or a movie. The TouchPico will project a 80 inch display to any flat surface and you will be able to interact with it. The device very lightweight, slightly heavier than your smartphone and about the same size.

GigaOM‘s Kif Leswing had the chance to see the device in action and here’s what he said:

The latency on the infrared pen is negligible, and the Android device showed little lag. I played Fruit Ninja, which offers a good example of how even a few milliseconds of lag can seriously hamper a product like this. Yes, I was able to pull off a few combos. I also saw the TouchPico’s capabilities as a projected whiteboard using Android drawing apps.

While everybody can purchase a TouchPico, it’s said to be aimed at the education field where it homes to replace expensive interactive whiteboard. The guys over at TechCrunch also gave it a try and here’s what they said:

In our demo with the TouchPico, we tried it out with a few games that would be fun for kids, playing a video on YouTube, and a PowerPoint presentation. The projector had no trouble keeping up with games like Fruit Ninja or drawing apps, though the trailer of Dawn of the Planet of the Apes that we tried to watch didn’t show up very well, even in low-light conditions. The PowerPoint presentation, which we tested using a free app from Google Play, was a bit too slow compared to hooking your laptop up to a traditional projector.

At the moment,  you can get your own TouchPico for $329, and you will save $170 from its $499 retail price. You will be able to choose a black or white projector with an estimated delivery in October 2014.

Wear Graphene Gamma: One Jacket to Rule Them All
Read Next
Source: IndieGoGo

S Pen: From Note-worthy to Note-able to Side Note?
An (Apple) Pencil, A (Samsung S) Pen: A tale of two styluses
Fossil Hybrid HR with Two-Week Battery and Heart Rate Sensor…
Withings ScanWatch Hybrid Smartwatch with Sleep Apnea…
What is RCS and How can it change messaging on Android?
You Can Now Install Google Recorder with Live Transcribe on…