No, it’s not Windows 9 or WindowsOne. Microsoft’s latest Windows operating system is named as Windows 10. Yes, the Redmond giant has skipped a version number to name its next generation of Windows as Windows 10. At an event in San Francisco, California, Microsoft has unveiled its latest version of Windows OS.

Windows 10 looks like an amalgamation of Windows 7 and Windows 8. Microsoft has retained the Live Tiles (or Modern UI) of Windows 8, but has brought back the much missed features like Start Menu and shortcuts for Shutdown & restart. “It gives the familiarity of Windows 7 with some of the elements of Windows 8,” said Joe Belfiore.

This is how the new start screen looks. 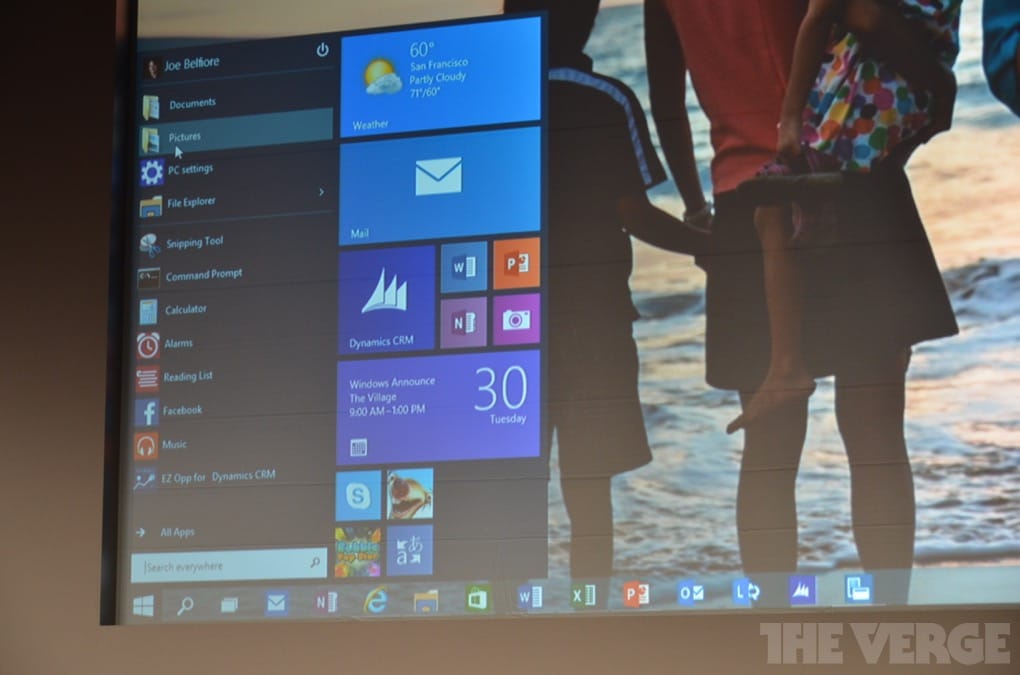 You’ll be able to resize the tiles on the Start Menu. There’s also a ME tile in there, and other live tiles. Start Menu will also have an universal search bar for quick access. Search results will now include web search as well, much like OS X Yosemite. The onus is clearly on making users with mice and keyboards comfortable using Windows, something which was terribly missed on the Windows 8.

According to Microsoft, Windows 10 will be one single operating system across desktop, mobile and IoT. There will be one Windows app store across multiple devices, with each app neatly adapting to different interfaces.

With Windows 10, Microsoft has introduced multiple desktops, which is pretty much like Mac OS X’s Expose. With this, you can switch between different desktops with multiple apps running in their own separate areas. The new “Snap Assist” UI will help users to grab apps from multiple desktops. Basically, Microsoft is trying to please the power users with the new multi-desktops feature.

There are few other enhancements to Command Prompt and Charms bar. Also, Cortana will be available across devices and won’t be phone only like before. But the onus is clearly on bringing back the Windows 7 features which were greatly missed by users on Windows 8. For touch users, Windows 10 will have something called continuum which is essentially a mode that switches based on touch and keyboard input.

More details on the universal apps will be shared at BUILD 2015 which is scheduled to be held in April next year. Looking the name, “Universal apps”, we can finally expect Windows 10 to be that single operating system across all screen sizes – from 4-inches to 80-inches.

The Windows Insider Program has gone live, which means you can go ahead and download Windows 10 to your machines. Of course, be cautious as this is only the first version of Windows 10, so it’s bound to generate plenty of crashes and bugs.

Was this article helpful?
YesNo
TechPP is supported by our audience. We may earn affiliate commissions from buying links on this site.
Read Next
How to Request Read Receipts in Microsoft Outlook
#microsoft #Windows 10