Samsung has launched the Galaxy Note 4 phablet in India with a price tag of Rs.61,500 (~$1000), and best price of Rs.58,300 (~$950). Surprisingly, the Samsung has launched the Snapdragon 805 variant of Galaxy note 4 in India, instead of the Exynos version as we were expecting. The phone goes on sale on October 17th, the same day as Apple is launching the iPhone 6 and iPhone 6 Plus in India. 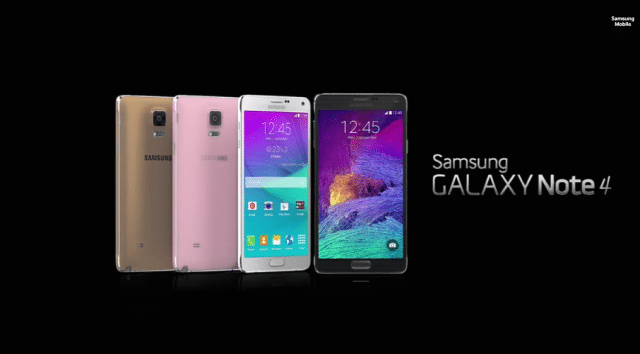 The new Galaxy Note 4 comes with a stunning 5.7-inch QHD (2K) Super AMOLED display with 2560×1440 pixels resolution, and has a sleek metallic frames on the sides which gives a much premium look and feel to what is otherwise a typical Galaxy Note device. That metal band wrapping running around the edges is similar to the one we have seen on the Galaxy Alpha smartphone.

The Note 4 is about 8.5mm thick and weighs about 176 grams. Under the hood, the Galaxy Note 4 is powered by Qualcomm’s Snapdragon 805 quad-core processor clocked at 2.7GHz, Adreno 430 GPU and whopping 3GB of RAM. The phone will be available with 32GB of internal storage, with microSD expansion up to 128GB.

The Galaxy Note 4 has a 16-megapixel Sony IMX240 sensor for rear camera with optical image stabilization and a 3.7-megapixel front-facing camera. The rear camera is accompanied by a dual-LED flash and is capable of capturing 4K videos at 30fps. The front camera is capable of shooting images and videos in WQHD resolution (2560 x 1440 pixels).

Even with connectivity options, you name it and you get it, including the Wi-Fi 802.11 a/b/g/n/ac, dual-band, Wi-Fi Direct, DLNA, Wi-Fi hotspot, Bluetooth 4.0, A-GPS with GLOSNASS and 4G LTE support. As for the battery, it comes with 3,220mAh battery which looks humongous, but then it needs to power a large screen QHD display.

The Samsung Galaxy Note 4 takes on the bigger than bigger Apple iPhone 6 Plus which starts at Rs.62,500 for the 16GB variant in India.

Note: The article has been updated with regards to the processor on board.

TechPP is supported by our audience. We may earn affiliate commissions from buying links on this site.
Read Next
Samsung Galaxy Fold 4 Tips and Tricks: Get the Most Out of Your Phone
#Galaxy Note 4 #india #samsung