Google has started rolling out offline video playback for YouTube mobile users, but it’s currently available only on mobile devices in India, Indonesia or the Philippines. Google doesn’t mention on its official blog that the new feature is limited to Android devices only, but considering the countries in which it is launching at the moment, there’s a chance that this could be somehow part of the Android One initiative. 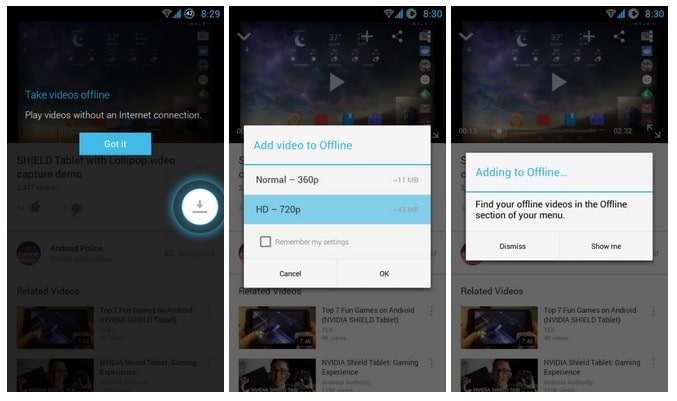 YouTube videos that support playback will include an offline icon which will offer a choice of playback quality. Users will now see a download icon underneath videos which will allow users to store the content in standard or high definition. YouTube also provides the file sizes next to each option, so, for example, you can choose to download in HD or in normal quality.

Since a  YouTube Music Key subscription isn’t required, users can download pretty much all the content that is available online. The downloaded clips are then accessible in the Offline section of the YouTube app, where users can watch them without an Internet connection whatsoever.

However, once taken offline, users will be able to play videos without an Internet connection for up to 48 hours. Afterwards, perhaps, the app will automatically delete them. Also, at the moment we don’t exactly how many videos will be available for this new features, as Google only mentions this ‘videos where this feature is available‘.

It seems that Google has chosen the Asia-Pacific region because of the importance of mobile internet, as well as the lack of people with data packages. Jay Akkad, Product Manager at YouTube, said the following:

“Asia has proven itself to be a mobile-first world in terms of smartphone adoption, but access to high-speed, affordable data remains a big challenge. In response, we’ve been working on ways to lessen the demands of speed and data for people using our products in places where there are challenges to access”

YouTube’s vice president of engineering, John Harding, says that around 40 per cent of YouTube’s traffic in India comes from mobile devices. He also said that content providers such as T-series, Saregama and Yashraj Films will have their content available in the offline-mode. Indian users are also said to watch around 5 billion videos on YouTube per month.

Speaking of Google’s video presence in India, it’s worth reminding you that the company has finally made available its affordable Chromecast streaming stick to Indian customers.

How to View and Delete YouTube Watch History [2022]
Read Next
Photo Credits: AndroidPolice

Elon Musk’s Favorite Video Game is Available for Less than a…
Instant Brands makes its foray into India with Instant Pot…
Seven Years, and STILL Going Strong: What Makes the ATH-M50x…
Proactively Personal: what makes the Apple Watch special…
#BoycottChina - When a Hashtag Makes a Hash of Economic…
Samsung makes a comeback in India, as smartphone sales…