If you want to use your smartphone or tablet to easily control the camera and share pictures on-the-go, you might need a Wi-Fi-enabled SD card. These SD cards are very similar to the normal ones you’re probably used to, just that they also come with a Wi-Fi chip that’s able to capture the internet signal from your mobile device.

This way, you can connect to the net via your camera the same way as you’d do with your cellphone. All you need to do is to create a hotspot using the internet-connected device, and then you’re ready to go. There are two or three well-known brands out there that costs quite a bit, but we also found a few less expensive ones that are worth a try.

Having a Wi-Fi SD card is turning into a more democratic thing since we started having options for only $50 or even less to buy online. This being said, we took a look at some of the most affordable ones without forgetting about the top-notch cards out there. Let’s see which one of them is going to win our readers! 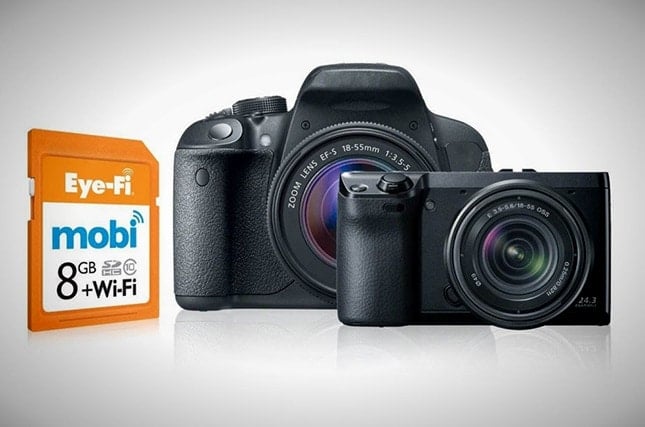 Eye-Fi is definitely the most popular company in the field. Based in California, it produces normal memory cards for your cam, as well as Wi-Fi SD cards that can be used on the same digital camera. While there are two different options – the mobiPro and the mobi card, we decided to take a look at the first one before moving any further.

With a storage capacity of 32 GB, this one comes with 1 year of free usage with an unlimited number of photos transferred over Wifi. The cool feature here is the fact that it creates its own internet network, so there is no need for an existing one. This way, the camera connects to the Eye-Fi mobile application no matter where you are.

The same app also lets users edit their photos by cropping them, adding a few basic effects, removing red eyes and so on. What is different in the case of the PRO version is that you can select which photos to transfer rather than having them all sent to your other device at once. Besides, you can choose to work with your own wireless network if you want to, and high-speed transfers will even be possible at 90 feet outdoors and up to 45 feet indoors.

The Mobi Pro with a total capacity of storing 12 hours of video and 16,000 pictures can be purchased from the official site or on Amazon for $100. While you can take advantage of the EyeFi cloud service for free during your first year, you’ll be able to use it afterwards for about $50/year.

The Mobi SD Card from EyeFi 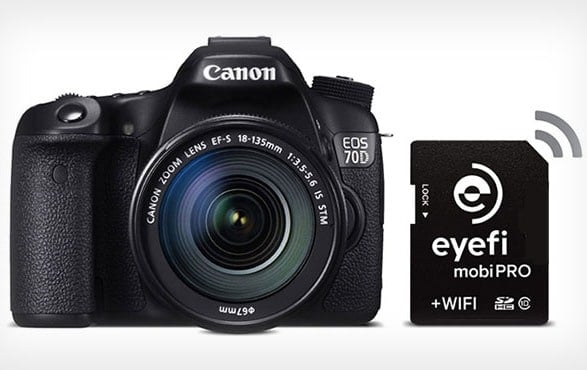 Now that we took a look at the more powerful, but also more expensive option from EyeFi, it’s time to see what the Mobi SD card can do. In this case, you can go for 8 GB storage space if you’re willing to pay no more than $50, but you’re also free to choose the option with 16 GB for $80.

The differences between these two options are pretty obvious – using the first one, you’ll only be able to store and transfer about 3 hours of video recordings, as well as 4,000 photos. Choosing the second one, you can take advantage of double the space for a price that’s just a little higher.

Both options for the Mobi SD card include 90 days of free access to the cloud service. Once this one is done, you’ll have to subscribe to the same membership we mentioned before – the one that costs $50 per year. However, you might not even need it if you find the 8/16GB to be enough for your purposes.

The main features that you’ll be missing if you don’t go for PRO are: less storage space, can’t work with your own Wi-Fi network or hotspot and you won’t be able to select the photos to transfer. However, the fast and simple setup, the compatibility of the card with most cams, as well as the fact that it works with laptops, desktops, but also mobile devices and TVs definitely make up for that.

EyeFi may be the most well known in the field, but it’s certainly not the only one. Toshiba also came up with its own solution – the FlashAir SD card. This one works in a pretty different way than the option before. In this case, you won’t have one single connection between your device and the camera, but up to 7 different ones are allowed at the same time.

This being said, you can connect to a ton of different devices at the same time and send your pictures/videos to all of them simultaneously. Another cool feature is that it automatically transfers everything, so when you connect to an external device, all you need to do is to open the pictures’ browser, and you’ll already be able to see them all.

This makes it easy to access photos no matter where you are, and you don’t have to worry about USB cables anymore. You can buy it for $50 (or lesser) and see the full list of compatible cameras here – the same place where you can choose if you want the Class 6 with 8 GB or Class 10 with either 8, 16 or 32 GB. 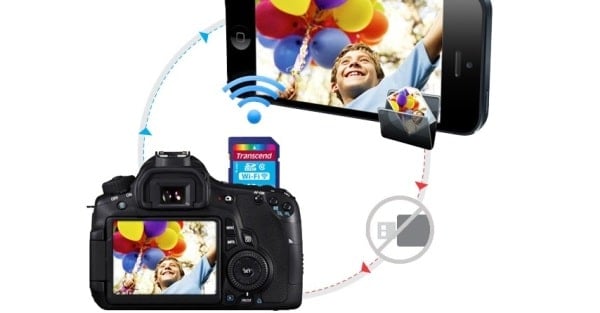 Another important competitor on the market is the Transcend SDHC card that comes with a simple interface allowing you to share as much as you wish. It lets you transfer photos to one device at a time, but you can also choose to share using social media or email.

While it’s generally speaking better to switch the Wi-Fi off by yourself when you’re done transferring, this card comes with an option that lets the internet switch off all by itself. This way, you can let it turn off after 1, 5 or even 10 minutes of being used. Depending on how much storage space you need and what class you’re looking for, prices vary between $20 and $140.

The card restore can also be done directly from the cam, and you can choose between several apps to use. Gmail, Bluetooth, Messaging and also Picasa are now part of the options. You can find this card on Amazon, but you can also buy it from the main website. It comes with a standard option for Class 2, but Class 4, 6, 8 and 10 are also available while the average transfer speed is of 16 Mbps.

Trek 2000’s Flucard is the best one to get if you want to use your smartphone as a remote control for the camera. It comes with a version that was specifically designed for the Pentax cams while the standard one is compatible with most cameras.

You can choose to go for PRO with 8GB, Ultra with 16GB or Gold – still with 8 GB, but a wider variety of apps to use with it. The first and the last one are both Class 6 while the Ultra version is Class 10, and you can purchase them all from the main web page.

Prices are much more reasonable than they are for the other ones, as you can get their best SD card for only $40 right now. There are various apps to use with this one in order to download all pics, select some of them or instantly be able to see them on most iOS, Android and Windows phones. The usual speed is a little lower – only 10-14 Mbps, but it’s still good enough to be worth trying. 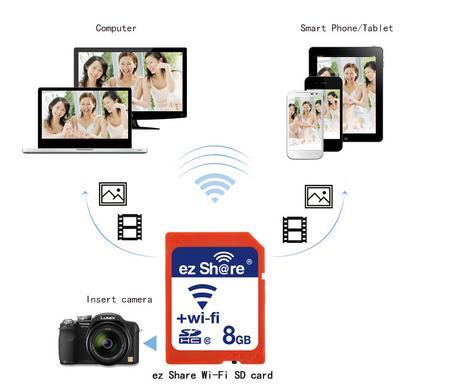 The Ez Share is a simple photo share SD card that comes with a tiny Wifi chip inside of it. In terms of capacity, you can choose between 4 GB, 8 GB, but also 16 or 32 GB options. When it comes to the R/W speed, you also have the choice between Class 4, 6 and 10.

As long as you have a Wifi-enabled device nearby – a smartphone, tablet, laptop or PC – you can easily send photos to the camera. It works with digital cameras, as well as video cams, DSLR and many more, and when it comes to web browsers, it supports Safari, but also Opera, Internet Explorer, Chrome and UCWeb for Android and Windows users.

It operates at a 5-10 meters range indoor while it can get very efficient (25-50 meters) when you go outdoors. Apart from the simple setup and the fact that it makes it easy to transfer both photos and videos, the cool thing about this card is that it comes with a physical switch for Wi-Fi.

Costing around $40 on Amazon and most other websites, this SD Card will only act as a Hot-Spot while the Internet Mode with router connection is absent here. Some have been complaining about the speed for the Class 10 version – around 10Mbps. However, in most other cases, you’ll rapidly transfer files at 15-20Mbps. If you look for it long enough, you might be able to find cheaper options online – like this $30 one here.

Was this article helpful?
YesNo
TechPP is supported by our audience. We may earn affiliate commissions from buying links on this site.
Read Next
Best Places to Buy Refurbished MacBook or Mac [2023]
#Buying Guide #Cameras #Photography #sd card #storage #wi-fi