Adblock Plus, the popular ad-blocking extension for desktop browsers has released the beta version of a new browser for Android with a focus on blocking intrusive ads. This is not the first time Adblock Plus has made it to the Play Store. Their previous, more grandiose Adblock Plus app with global ad blocking ended up being removed from the Play Store. This time they have better odds of surviving as the efforts are limited to just the web. 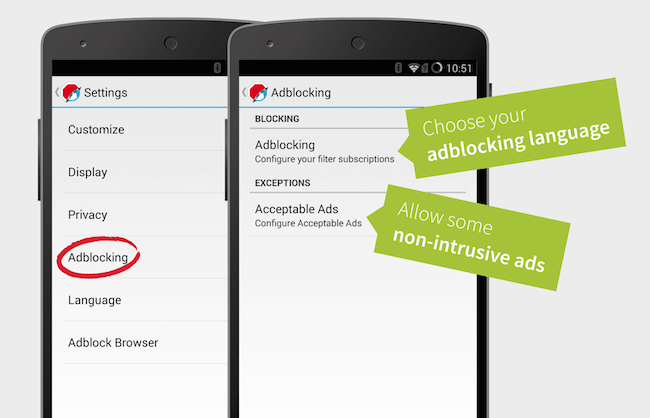 Till Faida, co-founder of Adblock Plus said “As people have embraced the mobile web, advertisers have rushed in after them and destroyed the user experience with ads that are often thoughtlessly designed, as well as mobile ad networks that are riddled with security holes. Adblock Browser for Android puts the control back into users’ hands.”

By disabling annoying ads on Android users can expect faster page load time, a drop in data consumption and longer battery life (while also protection from adware). To install Adblock Browser beta, join the Google+ Community by clicking the red Join button on the top-right corner. Then click the Beta Opt-In link in the About this Community section. At the time of writing, the app was not live in the Play Store but a spokesperson with the company tells us that it will be up shortly.

Blocking web ads on Android is not a new endeavor for Adblock Plus. They’ve had a plugin for Firefox browser for Android for a long time. In fact, that’s exactly what Adblock Browser is based on. According to VentureBeat, the company took the open-source version of Firefox 37, integrated their plugin as default, disabled Firefox Sync as well as access to other plugins and called it their own.

While that might not sound as innovative as building a whole browser from the ground up (a momentous task, to say the least), using Firefox’s base means the end-users won’t have major issues with the browser. Also, the integrated approach means the user doesn’t need to fiddle with plugins either.

The blogosphere has been abuzz with ad blocker think pieces recently. With The Next Web’s Edit0r-in-Chief Martin Bryant’s “Adblockers are immoral” leading the charge. As a technology writer, I sympathize with Martin. But not all ads are equal. For every TNW that’s trying to make ads “so good you want to share them,” there are millions of websites that serve malicious and spammy ads that end up compromising their visitor’s privacy and leave them frustrated.

But, of course, advertising is an important part of the web economy, which is why AdBlock Plus has a whitelist feature. All my favorite sites that don’t have obtrusive ads are whitelisted and you should try doing the same. Adblock Plus is itself aware of this divide, but they don’t seem to be handling it well. Adblock Plus has a program where it allows “some non-intrusive ads” but in my testing, I haven’t come across a major example of this behavior. And, of course, there are allegations of AdBlock Plus sneaking in some ads by heavyweights like Google and Amazon for a fee.

By default, Adblock Plus uses the EasyList filter for blocking annoying ads. You can switch to other lists like ABP’s Acceptable ads filter but unlike the desktop extensions, there’s no way to customize filters on Android.

Of course, ads on the web are only a part of the equation. Obtrusive and annoying full page ads that pop up randomly are rampant in poorly thought out Android apps. Sadly, there’s not much you can do about it. AdBlock Plus’s own app that uses a proxy and needs to be side loaded hasn’t worked well for me. Your only option there is to root your phone and install something like AdAway. Or you can just stop using those free apps with annoying ads or, when the developer provides the option, pay them a couple of dollars to remove the ads.

Update: While Google is yet to make the app live on Play Store, Adblock Plus has uploaded the APK file of the browser for anyone to grab. You can download it from here.

Was this article helpful?
YesNo
TechPP is supported by our audience. We may earn affiliate commissions from buying links on this site.
Read Next
Latest ColorOS Update Brings Ads in System Apps on Realme 1 [Update]
#ads #android app