Sales for the OnePlus One smartphone are no longer being limited to the invite-based systems, but interest for the device is slowly fading as we’re getting closer to the unveil of the second-generation. At the beginning of this month, it has been hinted that the upcoming OnePlus 2 will be priced at around $400 and will get the Qualcomm Snapdragon 810 SoC. Now a fresh benchmark seems to confirm this. 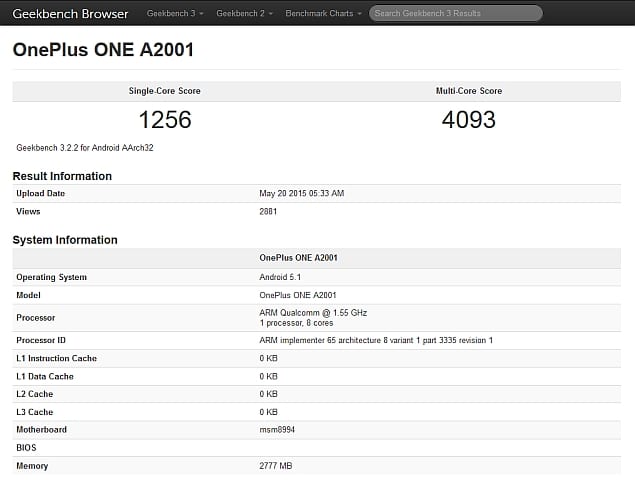 The above screenshot shows a recent GeekBench benchmark result of the upcoming smartphone, which, quite interesting, goes by the name of ‘OnePlus ONE A2001’. The test seems to have been performed yesterday, so this should be some sort of an indication that the guys over at OnePlus are hard at work behind the labs. Even if this is not the final version and it’s a prototype, it still shows clear indication of where it is headed.

The GeekBench results indicate that the smartphone will run Android 5.1 Lollipop, will be powered by a 64-bit 1.55GHz octa-core Qualcomm Snapdragon 810 (MSM8994) processor and will get 2.7GB of RAM (3GB of RAM included). Thus, despite its name, we know it’s not the OnePlus One, since this one has a quad-core 2.5GHz CPU. The device has also received scores of 1256 for single-core and 4093 for multi-core.

Previous reports suggest that the OnePlus Two smartphone will feature the same 5.5-inch display panel as the original OnePlus One, but with an increased resolution from full-HD (1080×1920 pixels) to QHD (1440×2560 pixels). Other rumored specs and features include a fingerprint scanner, 3300mAh battery,  32GB of inbuilt storage, 16-megapixel rear and 5-megapixel front-facing one and others.