It seems that Facebook has not lost its innovative touch and the newest feature in the block is the ability to connect with Public figures on realtime basis. No, we are not talking about the Facebook celebrity pages, but instead referring to the new feature which will allow celebrities to stream live events to their followers. Yes it sounds familiar since Periscope and Meerkat do the same, but Facebook decided to only allow celebrities to stream unlike the other live streaming apps. 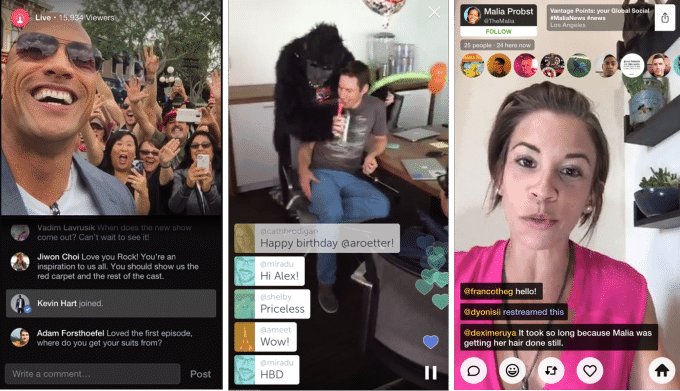 Public figures can now share live video from Facebook Mentions (a new app released exclusively for celebs) and this new feature is aimed at bridging the gap between the celebrities and their followers in a more intuitive way. The live videos will be infused in users News Feed and Facebook will also allow folks to comment, share and like the live broadcast video. Facebook has roped in popular figures like Dwayne The Rock Johnson, Serena Williams, Luke Bryan, Ricardo Kaká, Ashley Tisdale, Lester Holt, Martha Stewart, Michael Bublé and more.

In case you miss out the lifestream, it will still be available as a normal video unlike Meerkat and Periscope which deletes the video unless you save them on the camera roll. Facebook product manager explained to TechCrunch that “We think this will be an awesome experience for both public figures and also users. We want to get feedback from both public figures and viewers as we evolve the product.” He further added that “Public figures already have fans on Facebook that they share to every single to every single day.”

Facebook is betting big on this feature and as a matter of fact they will also be prodding users by sending them a notification for the page they have been recently interacting with. The Facebook mentions app was in fact the foundation for the live broadcasting and this was aimed at providing a rather clutter free and pure Facebook experience for celebrities sans all the noise and chaos. The Mentions ensured that celebrities had a greater level of engagement with fans and the live video feature only takes this entire experience to the next level. We need to understand that Facebook has a much wider audience base than Twitter and this new feature will help them keep the users hooked and intuitively engaged.