Apple’s Patent Filing Shows Off a MacBook with Reconfigurable Keyboard

Apple has a habit of staying a step ahead of its rivals, first it was the iPhone without 3.5mm jack and now a recent patent has revealed an outlandish yet innovative Notebook design from Apple. The patent published by U.S Patent and Trademark Office that shows off a reconfigurable Apple MacBook that does away with fixed keyboard and trackpad. This will let the user configure the placement of keys and trackpad as per his preference. 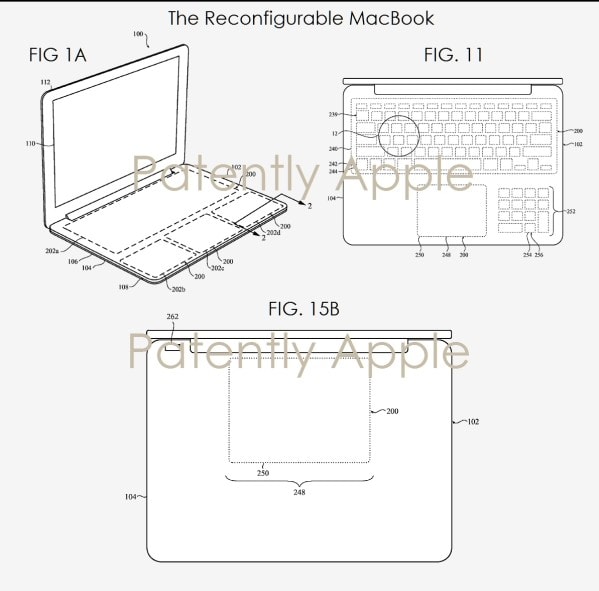 It would also mean that users will be able to add a numeric keypad or even a gaming pad anywhere on the surface. Apple has been bringing in a host of innovation be it the multitouch enabled iPhone or introducing the very concept tablet with its iPad.

The configurable notebook comes with a force-sensitive input structure and in all likelihood it might very well be a zero travel structure, which means that the keys will be pressure sensitive with zero travel.

The configurations will certainly not be restricted to the keyboard and the keypad but also many more peripherals like the drawing tablet. The patent further says that electronic device might very well use a single input structure for forming a number of devices. This results in the flexibility of using unique/configurable input device according to the requirement and preference of the users.

Additionally, the input devices might be moved anywhere on the force sensitive structure. This will allow the input devices to be placed on any location as per the preference of the users. The patent in question talks about a reconfigurable MacBook with the force sensitive input structure. Generally speaking, the idea seems to be in line with the modular designed phones we might be seeing in the future. Summing it up, the patent doesn’t mean that we might be seeing a reconfigurable MacBook anytime soon and it is most likely that Apple is just gearing up for the future, just like how it always does.

How to Convert WebP Images to JPG on Mac
Read Next
Source: Patently Apple