After Netflix recently started signing up for exclusive rights to Indian content, the other streaming services are trying to catch up as well. Hotstar streaming service is known for its local content streaming including the daily soap operas, reality shows and live sports, but now that is going to change as HotStar has started offering a premium service. 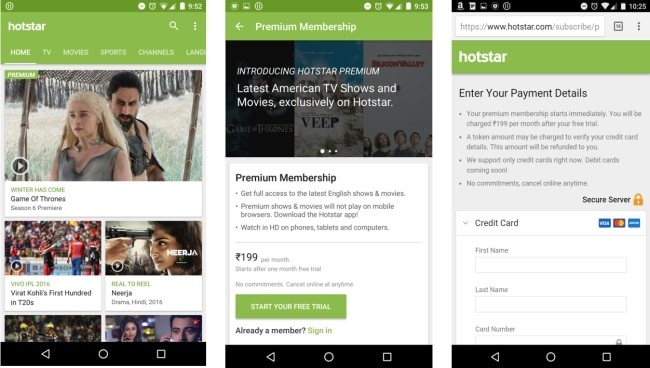 With Hotstar premium, one would be gaining access to US TV shows and movies at a nominal subscription fee of Rs 199/month. Just like Netflix, Hotstar would also be offering a free trial of one-month, post which the subscribers will be charged Rs 199 every month. The caveat however is that the service will currently support only credit cards as opposed to Netflix which has found out a way to charge your debit card monthly.

Hotstar’s claim to fame now is the Game of Thrones Season 6 premiere which was telecasted just minutes after the US telecast and this is something that can bring in a whole lot of subscribers. Last year, Hotstar had apparently inked deal with HBO for its TV shows including Game of Thrones, True Detective, Silicon Valley, Veep, Vinyl, Band of Brothers, Entourage, Curb your Enthusiasm to let users stream the show on the same day of the telecast.

Star India has further sweetened the deal by announcing that it would also be bundling the premium package with simulcasting of live sports and shows from its network. This can make a huge difference when it comes to subscribers, I mean who wouldn’t love to watch live sports on their smartphones.

PSA: apparently all the HBO content (including latest GoT, Veep etc) on Hotstar's paid subscription service is completely uncensored

Content censorship is something that comes hard on us Indian viewers, it was rumored that a particular episode of Game of Thrones was cut by a staggering 15 minutes, thanks to the censor. The Censor whip is something you don’t need to worry as Hotstar is a streaming service so what this means is that you can watch the US TV shows on the day of telecast without being subjected to censor of any kind. But for some reason, Hotstar has decided not to include English subtitles for ANY of their English offerings, which can be a deal-breaker for some.

Netflix does come with a diversified range of content but after using it for a couple of months I called quits. The reason being that most of the US TV shows that I followed were blocked on Netflix due to the geographical restrictions. This along with the rather expensive subscription fee has proved to be a deterrent. Hope Netflix gets around the restricted content thing and starts unlocking all of the US content for Indian viewers.

TechPP is supported by our audience. We may earn affiliate commissions from buying links on this site.
Read Next
How to Download Netflix Movies and Shows on Any Platform [2022]
#hbo #Hotstar #Hotstar Premium #netflix