After re-entering the Indian smartphone industry earlier this month, TCL has launched yet another budget handset – TCL 562 at a competitive price of Rs 10,990. However, unlike the 560, this one ditches the iris scanner in exchange for a more conventional fingerprint reader. Rest of the specifications are traditionally what you would expect from a modern day low-end smartphone. 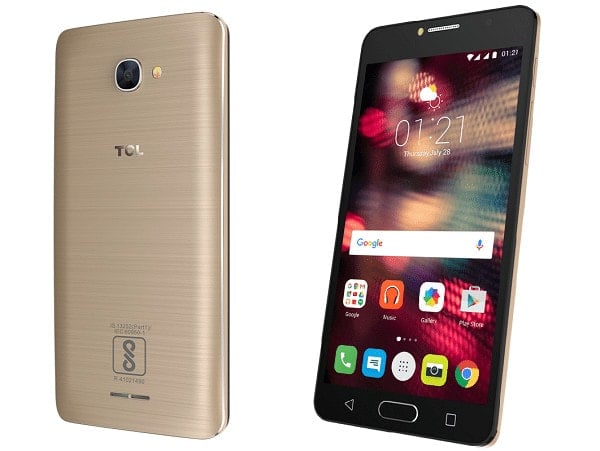 To begin with, TCL 562 comes with a 5.5-inch Full HD IPS panel up front and features a hairline-brush plastic body. Underneath, the device is powered by the Helio P10 Octa-core processor ((4X1.8GHz + 4X1.0GHz) along with 3GB of RAM, 32GB internal memory which isn’t expandable and a non-removable 2960 mAh battery without fast charging support. The camera arrangement includes a 13MP rear shooter, dual-tone flash and a 5MP front-facing wide-angle lens with flash. Additionally, the home button presents up front houses a fingerprint sensor. Lastly, the TCL 562 supports HI-FI Sound, Cat4 LTE, WiFi 802.11 b/g/n, and Bluetooth 4.2.

TCL 562 will be available to purchase exclusively on Amazon for Rs 10,990. The company is also offering a complimentary 1GB of data per month for 3 months offer for only Idea users. Furthermore, they launched a range of televisions starting from Rs 13,990 for the 32″ D2900 variant going all the way up to Rs 37,990 for the 48″ Curved Full HD P1 series.

Commenting on the launch of these devices, Mr. Nicolas Zibell, Vice President of TCL Corporation stated, “At TCL we are conscious of the world getting faster and demanding more from life in every way. Users dependence on technology is growing and so we want to make their lives simpler and enriching. Therefore our products appeal to the elegant, beauty conscious and highly social user and are more suited to the youth who demands to remain connected round the clock. The TCL 562 is a smartphone suited to helps users to multi-task between work and entertainment.”

TCL has been around in the Indian market as an ODM player, with lot of Indian smartphone companies using rebranded TCL phones for selling in India. It’ll be interesting to see TCL’s strategy for India considering the company is fourth largest manufacturer in China.