Math is one subject that had me challenged to the max during my schooling days. However, with the advent of technology learning, Math seems to be a less burdensome task. For instance, Photomath has been helping students solve complex equations by making use of your smartphone cameras. 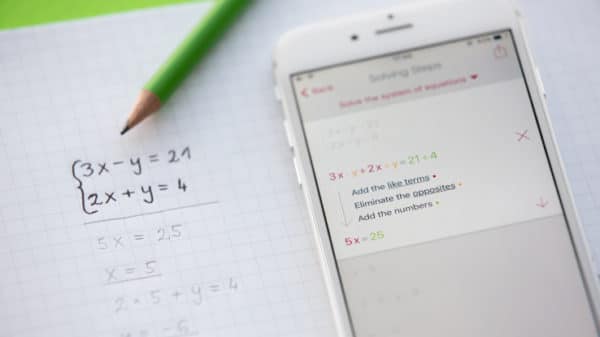 Until now, people could just point their camera at the problem which is in printed program and the app’s Optical Character Recognition would spring into action and solve the equations. It is worth noting that image processing algorithm is the cornerstone of this app along with the associated problem-solving algorithms.

Photomath has announced an updated Version 3.0 for their app on the iOS app store and this update brings a slew of new features including a much easier way to solve the Math problems. The new version will be able to detect handwritten text as opposed to the earlier version which could only recognize printed text. This is something that most of the students would relate to, usually the Math equations or problems are mostly in the handwritten form and converting the same into printed form is a herculean task. So now all you need to do is point your camera at any Math equations and the app will do the magic.

Interestingly, the update also comes with a Photomath+ feature which will employ a human-like approach in solving the problems. The Photomath+ also breaks down the solution into different steps and explains how to solve the problem with its colourful guide. Now just imagine how immensely this would help the students negate a complex Math problem, no more asking the bright kid in your class to help you with the homework. Also, in my personal experience, such an approach to problem solving will ignite the interest of the students and the intuitiveness is expected to help them learn better.

The Photomath+ is free until November 30th but after that, it will attract a Premium subscription fees. The company is yet to finalize on the pricing and subscription model for Photomath+ and this is something that will happen by the end of this year. All the new features we talked about earlier is currently available only for iOS and will be introduced for Android by the end of this month.

Educational apps have been on the rise and it is apps like the PhotoMath that take the learning experience to an entirely new level. The influx of mobile apps and tools in education is only going up higher and this also means that Schools can finally get access to class-leading technology without actually spending a fortune for the same.

PlayShifu Tacto Turns Your iPad into Interactive Board Games
Read Next
Source: TechCrunch

[Tech Ad-Ons] Facebook: A "Post it" Solution to all your…
AirDrop Not Working? Try These Fixes to Resolve Common…
How to Use System Restore to Fix Windows 10 Problems
Realme 5 Pro Review: A headache for Me and Mi, Really and…
Apple iPhone 11 and 11 Pro: India Pricing, Availability and…
How to Enable Support and Open HEIF and HEVC Files on…