As we approach the end of this year, rumours for the top 2017 flagships have already begun pouring in. If these reports are even remotely authentic, most manufacturers will be showcasing phones sporting edge-to-edge panels. However, hardware components for fabricating a utilitarian experience for the user is, though, still lacking but it is being developed as we progress. Acknowledging the industry’s position, Synaptics announced the first-ever optical-based fingerprint sensor which could essentially push the bezel-less dream further into a more realistic sector. 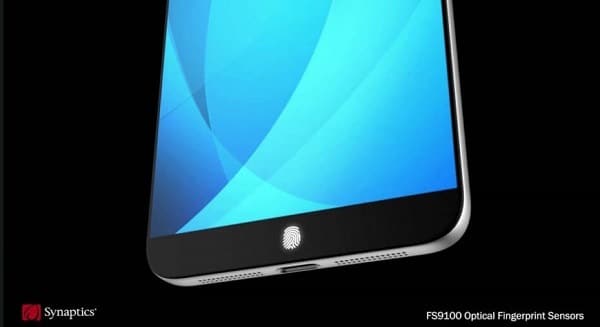 The new FS9100 sensor is capable of detecting fingerprints even when implemented under a millimeter of glass (including 2.5D). This not only allows manufacturers to integrate these biometrics sensors under the smartphone’s body but will also eliminate the need for a dedicated cutout or a home button in some cases. Unlike other such solutions, Synaptics’ claims that their module is exceedingly narrow as well as consumes less power that essentially, result in a more practical infusion which doesn’t critically hinder with the phone’s size and battery consumption. Additionally, the California-based company states that the FS9100 component is durable, scratch proof, waterproof, and also, eliminates electrostatic discharge perturbs.

“By bringing optical sensing technology with the right form factor and power consumption envelope to smartphones and tablets, Synaptics is enabling the elimination of the home button which is a critical next step to full top-to-bottom, edge-to-edge smartphone and tablet displays,” said IDC Research Director Les Santiago in a press release.

Furthermore, Synaptics says they plan to combat fake fingerprints by its Quantum Matcher PurePrint technology, which utilizes artificial intelligence for abolishing fake prints. The FS9100 chips will go into mass production sometime in Q2 of 2017 which means it probably won’t be embedded in Samsung’s upcoming flagship, however, there’s a possibility that Apple might employ it on the next iPhone which is already being rumoured to feature a bezel-less panel.

While there have been past attempts made at housing these sensors directly beneath the glass such as the one found on the Xiaomi Mi5s, they still required the glass to be shaved as they could only function at a minuscule level. On the other hand, Synaptics’ technology can work even at a depth of 1mm.

“Synaptics’ FS9100 family of fingerprint sensors represent a new breed of optical fingerprint sensor technology that is designed to meet the needs of mobile devices, including the ability to image through a thick 2.5D glass,” said Anthony Gioeli, vice president of marketing in the biometrics product division at Synaptics, in a statement. “In addition to opening the door to new industrial design options, it enables OEMs to provide highly durable, button-free cover glass and more easily provide water-resistant products, while eliminating low-yield glass processing.”