It’s been only a week since Facebook Messenger added a new camera to its app and now it already has an extension of the feature. Messenger has now rolled out group video chatting and the app will support six users simultaneously. Facebook has been doing whatever it takes to get people share more content and as a result is offering a handful of new intuitive visual options. Furthermore, the app will also support live 3D masks (currently restricted to iOS), emoji, stickers and send the text. According to Facebook, the this (video chat) is “the most requested Messenger feature ever.” 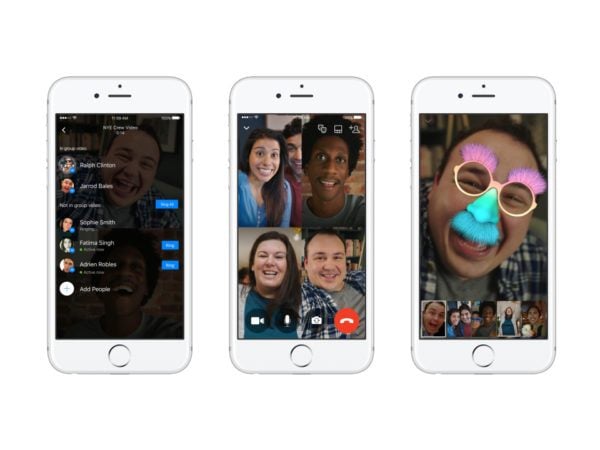 The new feature will be a direct threat to a handful of third-party apps that offer a similar functionality and till now has been successful in getting funded from the Venture Capital. Moving on, the new group video chatting feature also allows up to 50 people to join the conversation and just listen or even join via voice join in. In order to get started the update to the latest Messenger app and you are good to go.

It is ironic that Houseparty, an app from the makers of Meerkat has been once again thwarted by the Facebook’s offering. Meerkat was a live streaming app that could no longer compete with the Twitter-owned Periscope and Facebook Live thus finally shutting its shop. The Meerkat team then had a change in plan and went on to build Houseparty, a live streaming app that focussed on group chats and until now has 1.2 million active users. While the 1.2 Million user base might seem enormous at first it is actually a small number as opposed to the billion active users on Facebook. Adding salt to the wound is the fact that live streaming feature is a costly affair and most of the startups end exhausting the resources in order to build and scale a stable live streaming platform.

TechPP is supported by our audience. We may earn affiliate commissions from buying links on this site.
Read Next
Facebook F8 2019: Major Announcements and Highlights
#Facebook Messenger #Messenger Video