Microsoft revitalised the dying industry of all-in-one computers a few months ago with the launch of their Surface Studio. It is targeted at a specific set of people with its articulating touch display and a premium price tag. Dell, as a result, has announced a quite similar product at CES 2017 – the XPS 27 AiO. 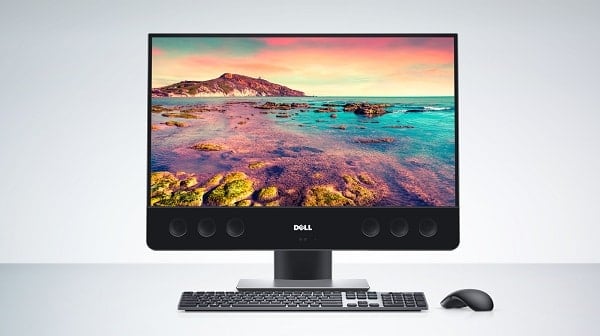 The new XPS 27, most notably, features an extensive audio system that contains a whopping ten speakers – six facing down the user, four responsible for the mid and bass frequencies, dedicated tweeters (treble speaker) in each corner, two more down firing, and a pair of passive radiators. Phew. It’s definitely one of the most loudest AiO ever unveiled as the audio is usually an underrated aspect of this type of machines as OEMs expect the consumer to purchase additional speakers and use headphones. To put it in perspective, Dell says the XPS 27 is roughly two times louder than Apple’s 27-inch iMac and has up to 10 times the base of HP’s Envy 27.

Apart from the audio hardware, though, Dell has taken a slew of cues from Microsoft’s Surface Studio. For starters, it comes with an optional variant that sports a touchscreen which can be pushed down to an almost flat position. The normal one has its own perks, it is slightly brighter – 350 nits versus 300. The computer is on the heavier side weighing 17kg (Surface Studio stands at 10kg) for the touch model and 13kg for the non-touch. You can also opt for a 4K panel.

Underneath, the XPS 27 is powered by Intel’s older Core i5-6400 or the Core i7-6700 sixth-generation CPUs. While the first one clocks at a maximum of 3.3Ghz, the other peaks at about 4Ghz. You can get up to 32GB of DDR4 and storage choices vary from 1TB of solid state storage up to 2TB plus a 32GB M.2 SSD. For the uninitiated – the M.2 SSD is significantly quicker than SATA’s speed limitations. If you’re really looking to spend, there’s also a 512GB or 1TB M.2 SSD option.

As far as the GPU is concerned, it runs on AMD’s R9 M470X chip which isn’t particularly powerful if you’re planning to get into VR content. Additionally, there’s also support for Windows Hello. Unlike its other AiO counterparts, though, XPS 27 doesn’t compromise at all in terms of ports. There are two USB-C / Thunderbolt 3, five USB 3.0 ports, a standard HDMI output slot, headphone jack, SD card reader, and a Gigabit Ethernet connector. It will be going on sale right away at a starting price of $1,499.