Lenovo’s YogaBook has been garnering some rave reviews and now Lenovo has announced a new Yoga A12 convertible laptop that comes with watered down specifications as compared with the YogaBook. The price tag is also set at a more affordable $299. The Yoga A12 will be available starting from February 8 across Lenovo’s website. 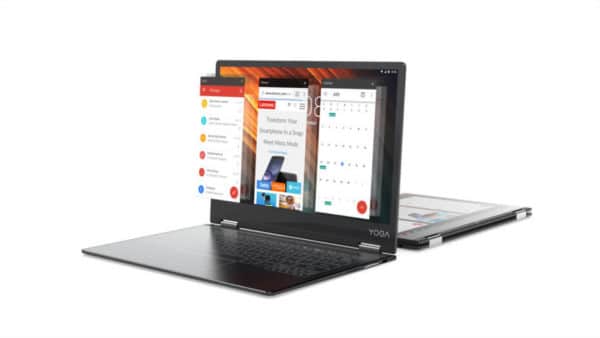 The caveat, however, is that unlike the YogaBook that’s available on both Windows and Android specs the Yoga A12 will only be available in Android. Also, the writing touch pad in the YogaBook is traded down in favor of a Halo Keyboard that still provides haptic feedback but that’s it, you can’t use it to write with a digital pen.
The Lenovo A12 comes equipped with an Intel Atom x5 chip paired with 2GB RAM. On the storage front, it offers 32GB of internal storage along with a microSD card slot that can further add memory. Again the specifications seem to be halved as opposed to the 4GB RAM and 64GB of Internal memory on the YogaBook. The audio arrangements in the A12 include two Dolby Atoms speakers and up to 13-hours of battery life.
Lenovo A12 offers a larger 12.2-inch touch enabled HD display and this is expected to score as a major advantage over the YogaBook which settles with a much smaller 10.1-inch. The device weighs in at just 1KG and is 5.4mm at its thinnest point. Also, Lenovo is prepping a Chrome OS variant of the YogaBook later this year. One thing that doesn’t go unnoticed is the Android push, with the resurgence of Chrome as an OS armed with Android apps we do expect to witness a handful of Chrome-powered machines in the market. Chrome OS is expected to be agiler and will require less computing resources as opposed to an equivalent Windows-powered laptop.

TechPP is supported by our audience. We may earn affiliate commissions from buying links on this site.
Read Next
Lenovo Legion 5i Pro Review: Legion Or Legend?
#lenovo #Lenovo Yoga A12