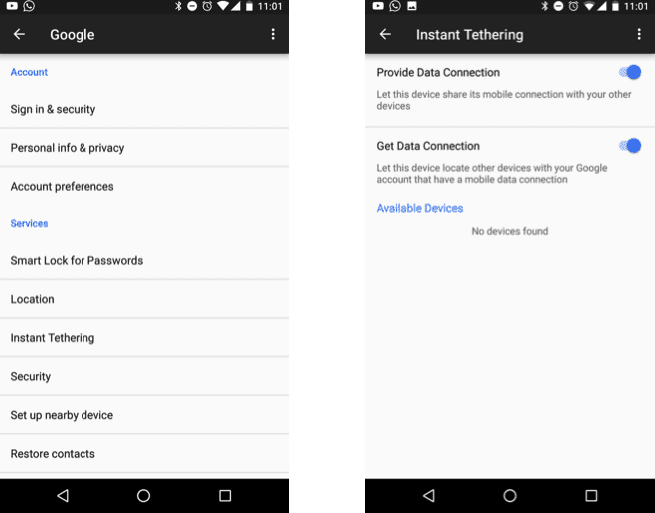 As per the support documentation, the Pixel, Pixel XL, Nexus 5X, Nexus 6, and the Nexus 6P will be able to host the tethering connections. All of these devices, including the Pixel C, will be able to share their internet connections without the need to punch in a password on the other device. However, both devices need to be signed up on the same Google Account, and Play Services 10.2.98 or later will be required. Also, the host device should be running Nougat 7.1.1 or above, while the recipient devices must be running Android 6.0 and up.

Instant tethering is something very useful, especially if you are using a tablet with Wi-fi or, as a matter of fact, any other Android device that comes sans cellular connectivity feature. In order to toggle on the instant tethering, one needs to navigate to Settings>Google>Instant Tethering. The list of supported devices will be populated, and the compatible device will get a notification saying, ‘Wi-Fi hotspot available.’ The process needs to be kickstarted by pressing on ‘Connect,’ and the host can also access advanced options in the Instant Tethering settings. Also, it’s worth noting that the Tethering may be blocked by some of the carriers, especially if you are on an unlimited plan.

Thankfully the Instant Tethering feature also comes with an auto shutdown function which will automatically switch off the tethering after 10 minutes of inactivity. At this juncture, the feature is available only for the Nexus and the Pixel devices; however, it’s also unclear whether or not the instant tethering will be rolled out beyond Google’s devices.

TechPP is supported by our audience. We may earn affiliate commissions from buying links on this site.
Read Next
How to Use Android Phone as Webcam for PC
#android #Android Nougat #Google Pixel #nexus