Tech Xperiment is a new web series on TechPP where we will be extensively using a new (or updated version of) software/app for a week or two in place of the default, well-known alternative. We started the series with Microsoft Edge last month, and we are following it up with Dropbox Paper.

I spend the better part of my day on a document editor rambling about technology. And in most of these instances, I don’t touch any of the formatting tools or tweaks available. My weapon of choice until now was Google Docs, primarily because of its offline capabilities, and omnipresent availability. But for the past two weeks, I’ve been using Dropbox’s new Paper and I gotta say, its minimalistic approach has definitely stumbled my affection towards Google’s productivity suite. But there’s an entirely different side of this story, some compromises and limitations I discovered in the past two weeks. 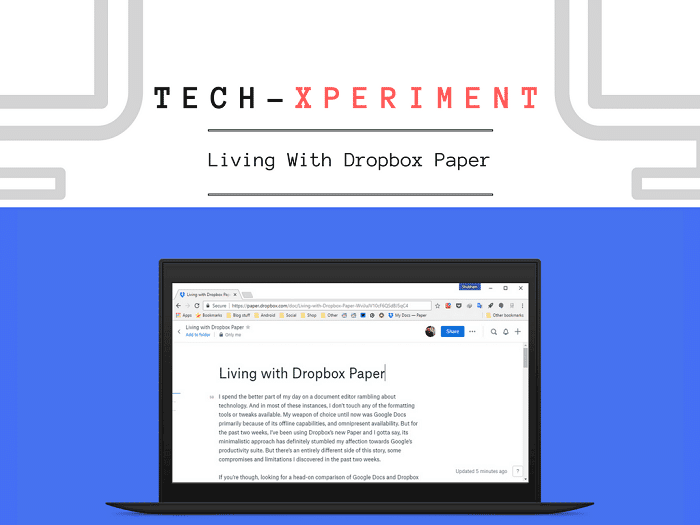 If you’re, though, looking for a head-on comparison of Google Docs and Dropbox Paper, this article I wrote at the time of the latter’s launch, might suit you better.

Before I tell you, what’s all wrong with Dropbox Paper, let’s get the good stuff out first.

Dropbox Paper looks and feels modern, that’s what will you captivate initially because let’s face it, Google Docs’ shabby design isn’t working out anymore. You begin to notice this right from the list of your articles to the editor. The clean aesthetic, fonts and the unbolted nature of its environment definitely stand out in a world that is overcrowded with dull interfaces. 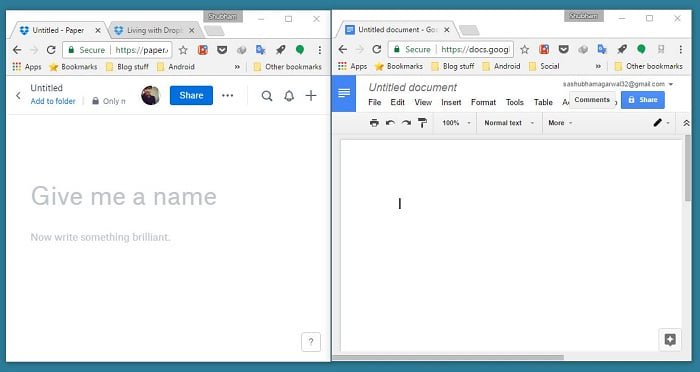 There are no toolbars studded with various utilities, instead, you can reveal these by selecting the text. If you’d like to add an image, for instance, you tap the little plus sign available on the extreme left of the sentence. The title with the placeholder “give me a name”, and the main content’s space isn’t separated and hence, provides a more coherent surface for typing. Moreover, you can add dedicated sections for programming codes, or insert a file directly from Dropbox. It comes with an abundance of keyboard shortcuts, most of which are quite standard across all platforms.

The collaboration mechanism isn’t anything different, however, Dropbox Paper’s presentation skills are way better. You can also monitor viewing history, revisions, and other usual stuff from additional options. The bell icon present on top gives a quick glance at activities happening on the doc such as comments made, changes saved, and more. Additionally, there’s a “present” mode in case you want everything to appear more readable on the big screen, and ofcourse, download the entire article if required. The editor is also capable of creating snippets and interactive previews if there’s a link in the document. If you’re an avid Dropbox user, you’ll also appreciate the seamless integration it has with the cloud service. 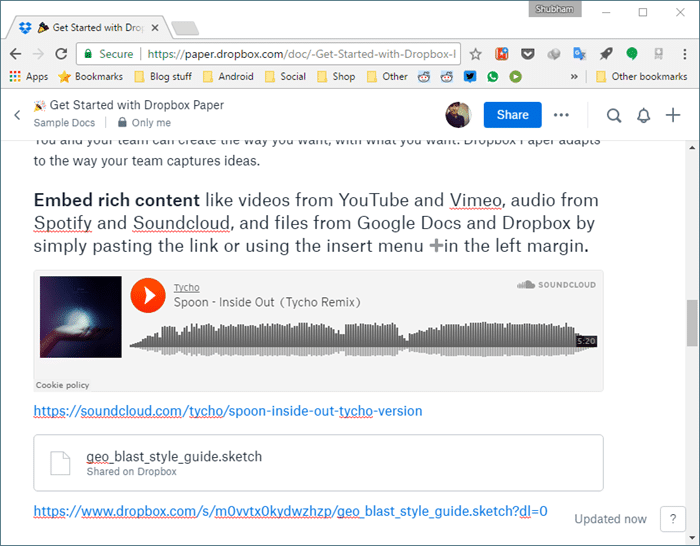 If you’re a professional who indulges with a series of formatting tools, you’re going to hate Paper’s limited resources. It’s not something the company forgot to add, it’s just how they wanted it to be. There are still, though, the basics available including headings, lists, strike-through, tables, dividers, document outline and a couple more. That’s about it, Dropbox Paper lacks templates, colors, highlighting option, extra fonts, manual font sizes, research tabs, the ruler, charts, you get the idea.

Dropbox Paper is meant to be a no-frills online editor where teams can come and brainstorm raw ideas. It’s not for people wanting to create resumes, comprehensive reports, brochures, or newsletters. Furthermore, unlike Google Docs, Dropbox Paper doesn’t support third-party extensions as you might have guessed already. Although, the majority don’t even know about that. Dropbox Paper also doesn’t work offline unless you’re syncing every file with your computer. This is actually biggest impediment for me as my life also revolves around a Chromebook.

It’s quite certain that no user isn’t going to change their primary cloud storage solely for using Paper and that’s what holds back my decision too. Dropbox Paper doesn’t support presentations, and spreadsheets yet, so I’ll have to switch back and forth between Dropbox and Google to access my files. Furthermore, there’s also the hassle of maintaining separate mobile apps. The significant complaint I have currently is the fact that it doesn’t work without an internet connection on Chrome or any other browser. Of course, you can overpass that if you’re syncing the entire cloud space with your local storage but that’s not the case with me, nor am I (or anyone with a limited storage) going to do that.

Dropbox Paper has its own set of drawbacks not everyone can ignore. But it’s a welcome addition for someone who already depends on Dropbox’s cloud service, although, that number isn’t really much as Google continues to reign. Moreover, it is definitely a big NO for someone who needs a substantially more comprehensive solution.

During the two weeks I’ve been spending time on Dropbox Paper, I’ve mainly perceived two sets of users it can service – ones that are already using Dropbox as their primary cloud storage, and people like me, writers, authors who are in search for a minimalist space, that also excels at collaboration tools, for jotting down their words. Personally, I loved it, but there are way too many obstacles for me to ditch Google Docs as I mentioned above. However, despite that, I’m still going to load up Dropbox Paper from time to time for writing articles that require more thought and a calmer environment to conclude. So, go ahead, and try it, there’s a good chance you may never go back to Google Docs or Microsoft Word.

[interaction id=”58c656107e8066d7630da5d4″]
Was this article helpful?
YesNo
TechPP is supported by our audience. We may earn affiliate commissions from buying links on this site.
Read Next
Skullcandy Mod Review: Betting on doing the basics well
#Dropbox Paper #google docs #review #Tech Xperiment