Tech Xperiment is a new web series on TechPP where we will be extensively using a new (or updated version of) software/app for a week or two in place of the default, well-known alternative. We start the series with Microsoft Edge, the built-in web browser on Windows 10 which is trying its best to shrug off the baggage of its infamous predecessor, the Internet Explorer.

It’s been about two years since Microsoft ditched its legendary Internet Explorer in favor of a more modern and proficient browser, Edge. And throughout this lengthy skirmish, Microsoft annexed a series of features in order to compete with market leaders such as Chrome, Firefox and Opera. However, they’re still anchored at a mediocre 5% of internet users despite Windows 10’s rapid adoption by over 400 Million people. Although the major reason behind that is the fallacious image it has, as otherwise, it’s still an astonishingly lightweight as well as capable platform and should suffice most users’ needs. 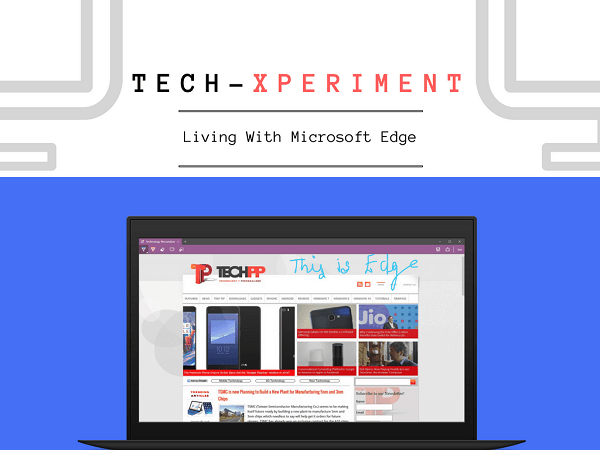 Hence, to know how significant the gap really is, I decided to renounce the aggressive memory appetites of Google Chrome for two straight weeks and switched to Microsoft Edge. Before I go on and discuss my findings, it’s important to point out that in no way, Edge can be directly compared to browsers like Chrome and Firefox. It’s only a matter of what are your expectations from a modern day browser and which one of them, adequately achieves those tasks without being inconveniently intimidating. 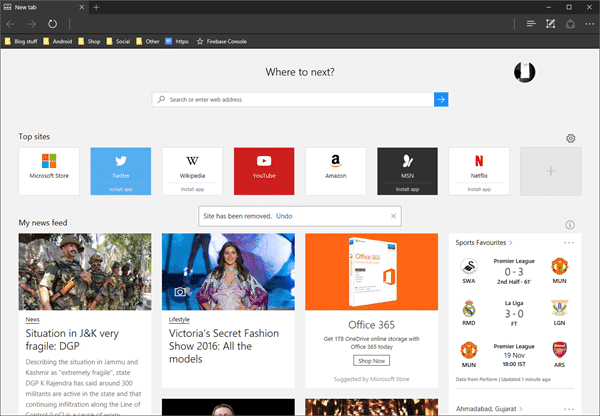 I’ve been using Google Chrome for years, therefore, it’s obvious I have an enormous amount of content stored in there. The first thing I did was to migrate my bookmarks and folders over to Edge. The import process is quite straightforward and effortless. However, I did already start realizing the drawbacks as Edge doesn’t have a dedicated application for managing your bookmarks. Instead, there’s merely a list of all your favorites which can feel a bit cluttered at times. You, as a result, also miss features like search and multiple selections. Although, chances are you won’t be a bookmark maniac like me. There’s nothing else I could transfer as Edge doesn’t support Chrome extensions natively, hence, I had to reinstall them if they’re available on the Windows store. Unfortunately, I could only find “Save to Pocket” and “OneNote Clipper”, so I moved on without my other eight essential apps. More on that later.

There are a lot of aspects you won’t like about Edge initially but thankfully, you can fix most of them from the settings. First and foremost, I completely removed the Edge’s home and new tab page that displays weather, curates new stories, scores, and what not. It adds three or four seconds to the loading process and is just not worth it. Also, the news it collects seems useless at times and advertisements for Microsoft’s products are annoying.

Edge also has a dark theme which I enabled as soon as I found about it, something which Chrome still hasn’t figured out. However, the biggest change you may want to make before using Edge is to make Google your search engine. Now, you won’t see Google as an option at the beginning, as Edge, alike most other browsers, is configured with OpenSearch. So, you’ll have to first manually visit Google and then, it will show up in the search engine settings.

Getting the Hang of it

Microsoft Edge is as conventional and barebones as browsers can get. The interface is extremely basic but there are two most crucial upper hands Edge has over others –  memory management and a tight integration of Cortana. I still can’t accept the fact that Google still hasn’t updated Chrome with their assistant services. Coming back to our point, the first thing you need to know about Edge is that it’s fast. If you have a lower specced computer, the difference is quite massive in my opinion.

While Chrome regularly sucks more than a gig of RAM, Edge makes peace with about 300-400MB. That’s a 700MB variance and it becomes evident when you’re multitasking with other resource-hungry tools. You can argue that I’ve eight more extensions running on Chrome but even when I disable them, Chrome doesn’t fall below 800MB which is indeed, bewildering.

The next major advantage Edge withholds is its Cortana capabilities and the native doodling skills in case your laptop has a touchscreen. At first glance, Cortana might seem superfluous to you but once you begin using Edge, it will pop up at places for more information. You can even right-click any word and tap the “Ask Cortana” option to reveal web results for it in a little window on the left. Neat. I, though, mostly use it for looking up word meanings. On Chrome, I had to install a separate app called “Google Dictionary” for the same purpose. 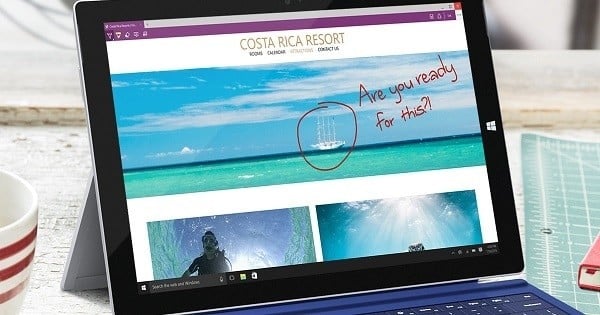 The Web Note can also come handy even if you don’t have a touchscreen. While sharing a screenshot with someone, you can highlight a sentence or point at a crucial paragraph. The reading view feature is also a nice addition that formats articles in an eye-friendly and ad-free page. You can add these to your reading list too if you want to read later.

One thing I was the most curious to observe is how Edge handles ponderous web pages when compared to Chrome given the low RAM consumption. But surprisingly, against all odds, there isn’t a substantial advantage Google holds there. Scrolling also feels a lot natural than Chrome on Edge as it has been designed to work flawlessly with Windows 10. Something which Microsoft constantly advertises is the battery life advantages you will get while using Edge. And to some extent, they’re not lying. I was able to get about 25% more juice out of my computer which is quite commendable. 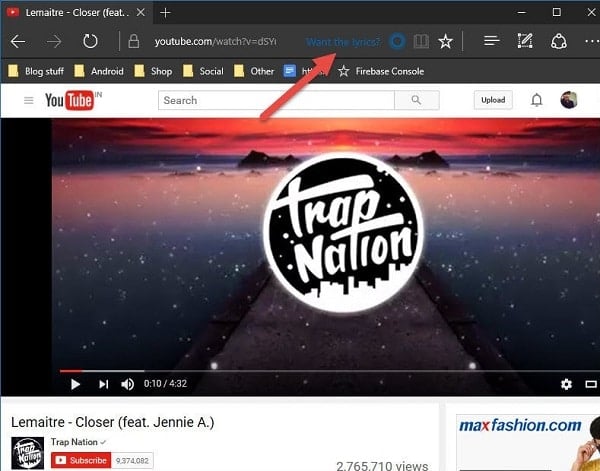 Although Edge is mostly straightforward in terms of available features, there are some aspects of it that might delight you from time to time. It can automatically recognize that you’re playing a song on YouTube, hence a tiny Cortana icon will appear in the URL questioning “Want the Lyrics?”. Additionally, you can right click any image and Cortana will show its details, related images, and other data if available. You can even permanently pin a Cortana panel on the right if you want. However, you still can’t manually search as there’s no text box or a mic button. For that, you’ll have to fire up the Cortana window from the taskbar. Another tiny yet great feature which Edge recently received in the Anniversary update, is tab previews. Every time you hover over a tab, you’ll get a small window displaying the web page. 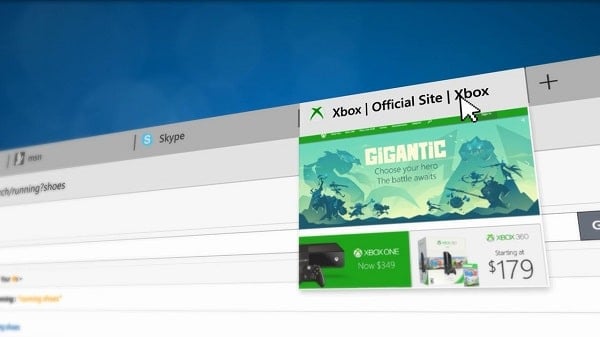 Apart from the “Oh, that’s nice” moments, I also encountered a series of shortcomings. The biggest and the most obvious one, is, of course, the lack of extensions. There’s aren’t a lot right now, sixteen in total precisely. For the majority of the time, I was able to get through without them, but Edge, unfortunately, doesn’t have Dashlane support yet. It is, though, compatible with Lastpass. 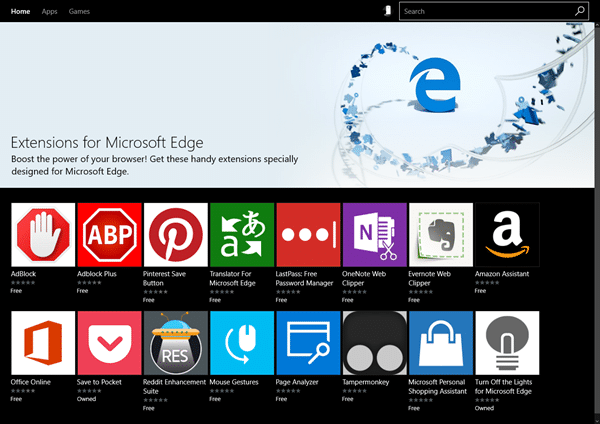 Furthermore, you can’t have a “search on google” option in the right-click menu like Chrome. Microsoft has limited such aspects to Cortana only which is in turn, tied with Bing. Additionally, it isn’t cross-platform yet except for if you have a Windows 10 running smartphone. So, you can’t sync your bookmarks or history with other devices. Edge can also freeze out of nowhere sometimes, cause for which I still haven’t been able to found. It will probably get better with updates but it’s been two years, come on Microsoft, you can do better.

So, now that you’ve been educated with what Edge is capable of and what it isn’t, time to answer the supreme question of this discussion – Should you switch?

The biggest concern I face when thinking of moving from Chrome is the lack of cross-platform compatibility. My life revolves around Android phones, Chromebook, and a Windows 10 machine. And as far as I know, Edge only works on one of them. So, it’s a big NO for me. But I still use Edge from time to time when there’s not enough memory available to feed Chrome.

Therefore, if bookmarks and history sync doesn’t matter to you and the required extensions are available, Edge is an astonishingly competent browser to consider.

Motorola Edge and Edge Plus with 90Hz OLED Display and…
10+ Microsoft Edge Tips and Tricks to Improve Your Browsing…
How to Hide or Spoof Location in Google Chrome, Microsoft…
From Positioning to Oppo-sitioning: Xiaomi’s comms get an…
Why the Motorola Edge+ is a No-Compromise Flagship
Cutting Edge: Ten Things You Might Not Know About the Moto…