Just as the world was getting over the exploding batteries in the Galaxy Note 7 we are back to square one, this time around its exploding earphones. A woman was badly burnt after a battery powered headphone exploded while she was asleep. To make the things worse the explosion took place on a flight that was en route to Melbourne from Beijing. The incident has left the victim with burn injuries spread across her face, neck, lips and also hands. Apparently, the headphones caught fire and exploded. 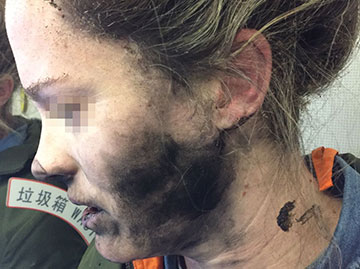 The Australian Transport Safety Bureau has already issued a safety warning and the woman has told the authority as follows, “As I Went to turn around I felt burning on my face,” she further added that “I just grabbed my face which caused the headphones to go around my neck, I continued to feel burning so I grabbed them off and threw them on the floor.” A loud bang had been heard when the mishap happened. The battery was then found to have stuck on the floor and had ended up melting. The plastic covers had been melted and the flame was doused off only after a Flight attendant immersed the burning headphones in a bucket of water.

With the onset of the Galaxy Note 7 fiasco last year, airlines have been cautious when it comes to spare batteries and battery safety in general. In fact, other gadgets including the Segway hoverboards and drones with larger batteries are not allowed by the FAA. Unlike the Note 7 incident, in this case, the ATSB has not revealed the brand of the headphones that exploded and this makes it premature to take stock of the situation.

Well, the new generation headphones including the AirPods from Apple come with a wireless battery built in the pods and all the wireless headphones either come with a Li-Ion battery or will require the usual AA or AAA batteries. In a nutshell, if you own any device with a Li-Ion battery ensure that its handled with care and also keep a lookout for bulged or abnormal batteries.

TechPP is supported by our audience. We may earn affiliate commissions from buying links on this site.
Read Next
Sennheiser HD 458BT Review: A sound investment, really, not an ANC one!
#battery explosions #Galaxy Note 7 Battery #wireless headphones