There was a time when the homegrown brand, Micromax ruled over the budget segment smartphones but ever since the company went relatively incognito, various other brands (notably the Chinese) have entered the space and have pretty much cemented their place in it. While Micromax made a comeback with a flagship level device recently, the company has not completely forgotten what can be called its core strength: the budget segment smartphones. Micromax, under its Evok series, launched Micromax Evok Note and Micromax Evok Power for Rs 9,499 and Rs 6,999, respectively. The Evok Note is the high-end one out of the two, but is it going to be the ace for Micromax in the budget range bracket, which is pretty much seeming saturated? 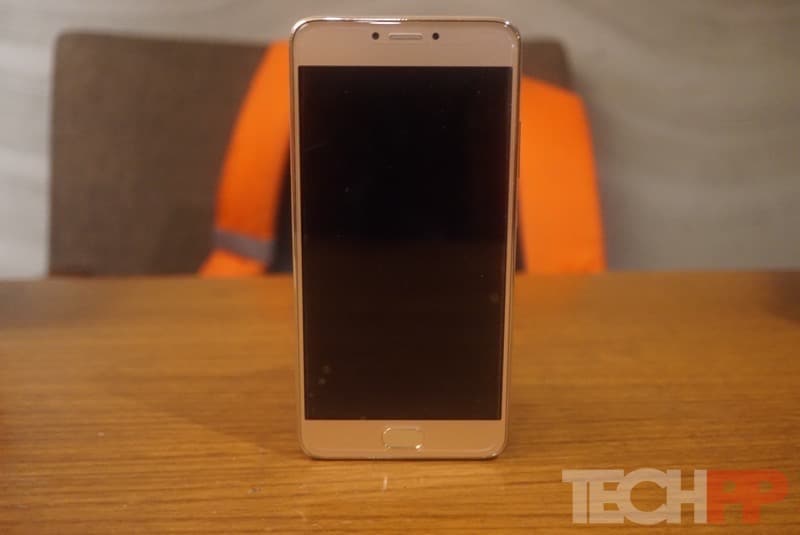 In terms of sheer looks, we think Micromax has been able to achieve the premium look for a budget range smartphone quite successfully. The Evok Note comes with a 5.5-inch full HD screen with a screen resolution of 1920 x 1080 pixels. It covers most of the front of the phone and comes with 2.5D glass which gives it a very elite look. Encased in a metal body, the Evok Note sports a home button just below the screen and there are three on-screen buttons for navigation. The proximity sensor, the front camera and the earpiece are present above the screen.

Moving on to the back, the pattern here is thankfully not so similar to the ones we generally see in the market at this price point. Micromax has tried to use a fresh approach. There are no shiny metal finished antenna bands on the back but just two lines carved in the metal dividing the metal body into three different segments. If you look closely, you will find the company has also tried to blend in two different colors in these three segments – the color and even the texture of the segment in the middle is different. This is not a very loud element but is a very decent subtle effort to stand out. The back of the phone also wears the primary camera and the dual LED flash, both of which are placed just below the antenna band on top. Above the second antenna band, the company has placed its logo which pretty much stands out as it is silver in color over the champagne gold phone and is also different in terms of texture. This also is the only branding we see on the phone from Micromax which we found was very low-key yet classy. A lesson here for some companies that bomb their phones with names and logos. Keep it clean, folks! And although usually, all the budget phones sport the fingerprint scanner on the back, the Evok Note has one on the front. The home button acts as a fingerprint scanner too, which again makes it a little different from the lot. 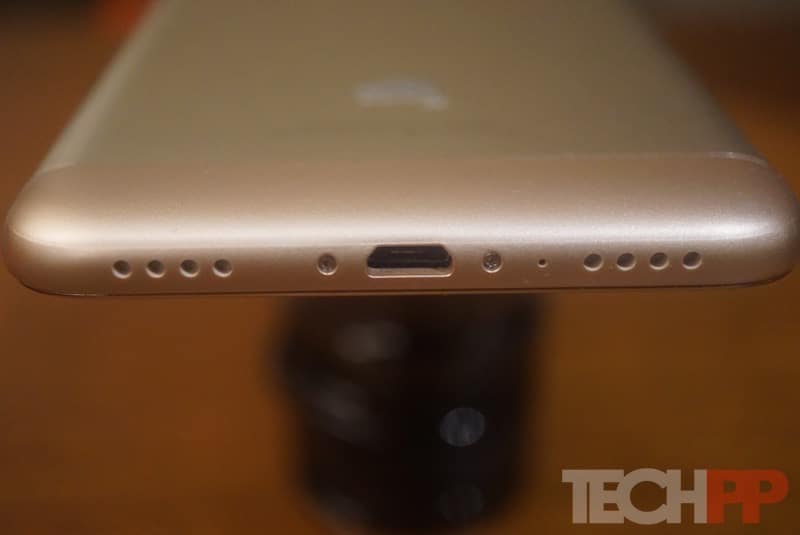 The edges of the phone are covered with a metal rim, the same kind we have seen in countless Samsung phones. Apart from that, the company has placed the volume rocker and the power button on the right side whereas the SIM card slot pops out of the left.

The speaker grilles are placed at the base of the smartphone along with the micro USB port while the 3.5 mm audio jack is present on the top. The smartphone measures 75 x 153 x 8.5 mm and weighs 162 grams – it is reasonably thin and not too heavy. The bezels on the side of the Evok are not that thick but the ones on top of the display and below it seems a bit too large. The phone already comes with a 5.5-inch display and these bezels just add a bit more to it, which does not really make it compact. That said, the phone is generally comfortable to hold, even for those with tiny hands and has got a nice and firm grip to it.

The Micromax Evok Note is powered by a 1.3GHz octa-core MediaTek (MT6753) chipset coupled with 3GB of RAM. The handset comes with 32 GB inbuilt storage. You can add another 32 GB in your storage by using a MicroSD card on the phone.

The smartphone is not backed by the greatest numbers but did a decent job when we put it through various multitasking missions. The transition from one app to another was smooth and we did not face any stutters there. We also left as many as 12-13 apps open in the background while using the phone but that did not cause any hindrance in the experience. The phone also did a decent job in the casual gaming zone and we had a smooth and lag-free experience when we played games like Temple Run 2, Candy Crush and Color Switch. But that is where the good news all pretty much ends. 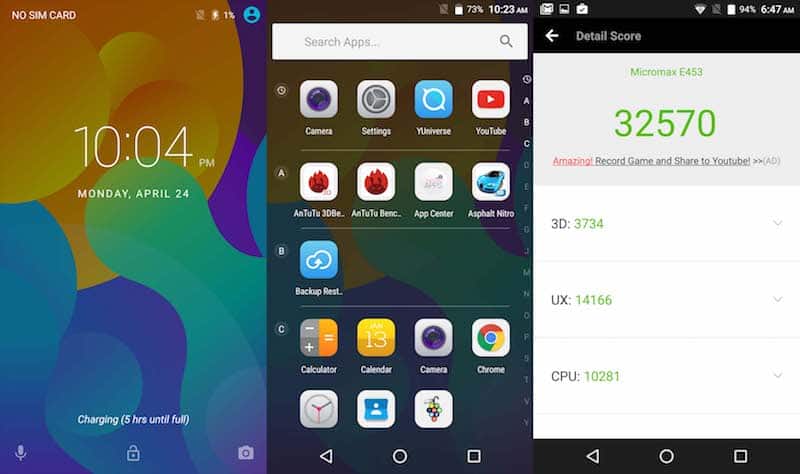 The phone could not really take on the pressure put by heavy games, showing signs of weakness from the initial stage itself. It took quite some time to launch high-end games like Asphalt Xtreme and NFS No Limits and also lagged while we were playing the games. On top of this, the games also crashed a few times while we were playing them. Which is why an AnTuTu score of 32570 does not seem to be surprising at all.

Cameras: inconsistent at the back, grainy at the front

The Micromax Evok Note comes with a 13-megapixel primary camera with autofocus coupled with dual LED flash and there is also a 5-megapixel secondary camera on the front. The rear camera comes with a 5P Largan lens to enhance its low light performance, as per Micromax.

The primary camera on the Evok Note can be termed as just a notch above average. The camera just could not reproduce the same vibrant colours as in the real settings – we think it just produced a little washed out colours. In terms of detailing, the Evok Note scored most of the times but also missed the mark a few times, which we think makes it an inconsistent customer. The camera produced well detailed images with a hint of bokeh in some close up shots and also worked well in some standard shots but unfortunately, it was not the same across all pictures. It was also a little disappointing in terms of handling glare. The camera could not really handle bright sunshine well, let alone intense sources of light. 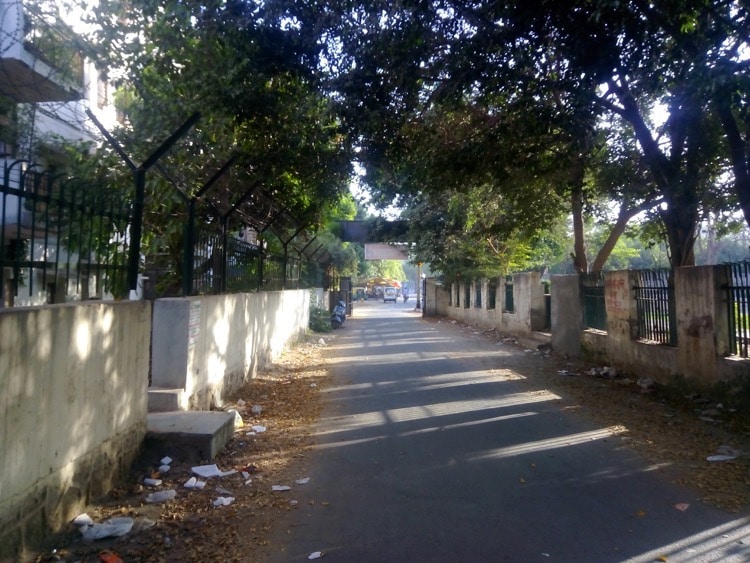 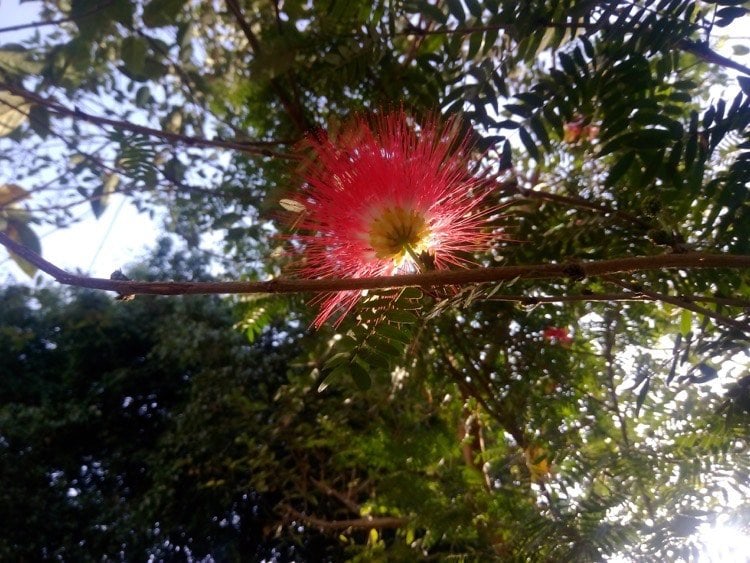 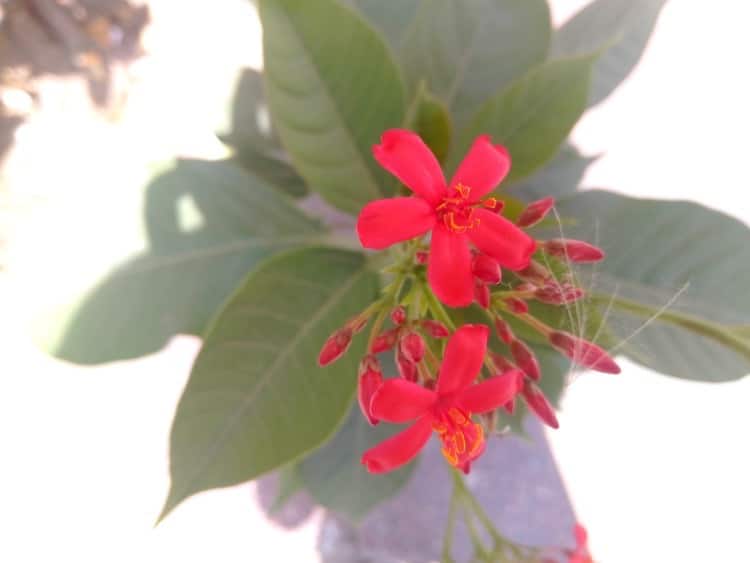 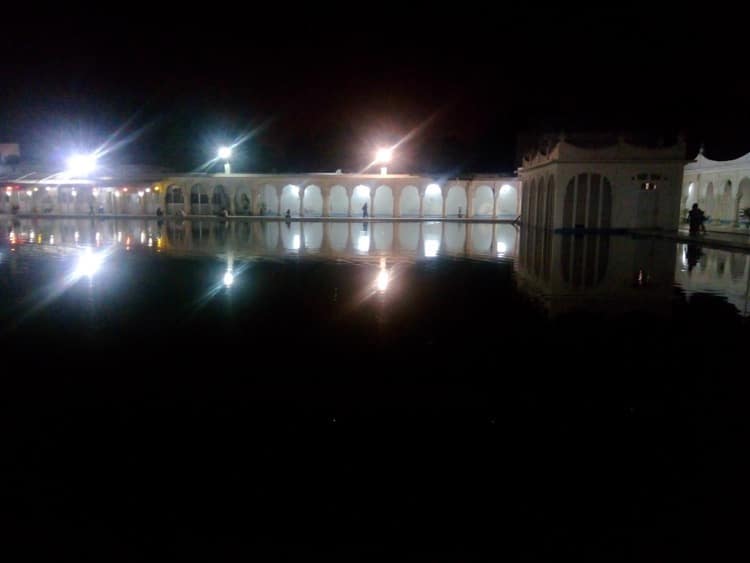 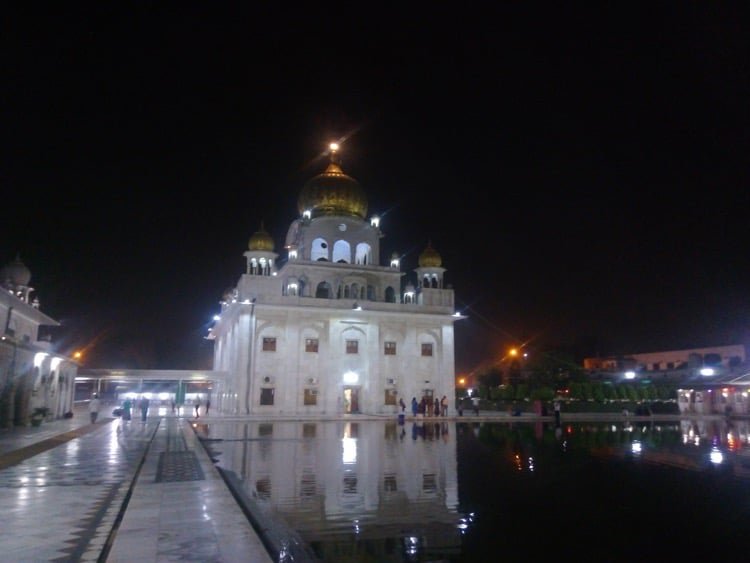 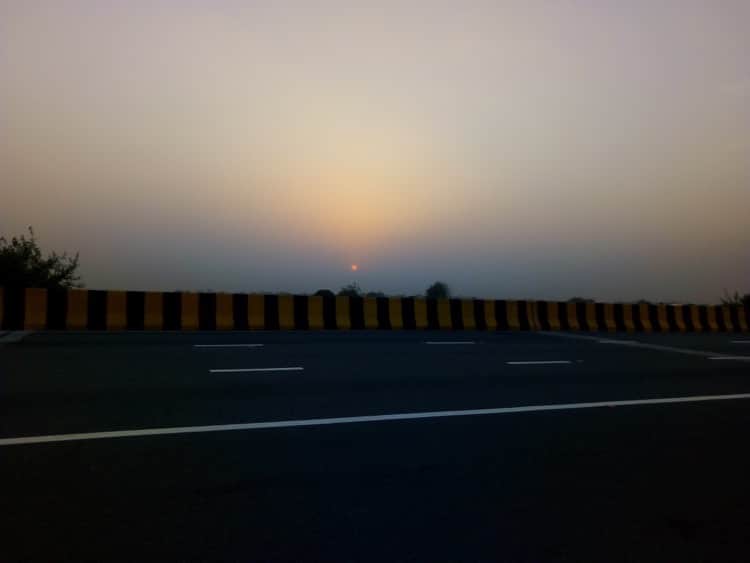 There are about 15 modes that you can use in your pictures. The primary camera comes with smile detection and gestures detection feature (peace/ victory) that work just fine most of the times. The phone also offers you a mode through which you can change the settings.

The front facing camera was not really up to the mark, disappointing in both color and detail. The colors seemed a little faded and the pictures were grainy which made zooming in a total pain. The front camera was also a bit laggy and was not as smooth as we expected it to be. There were a number of features like hand gesture of “peace” will automatically take pictures, and also a beauty mode on the phone, but we think it was just way below average. Images looked grainy on the camera even before we clicked them.

All in all, the rear camera on the Evok Note seems decent enough but the front camera is a farmer’s dream – lots of grains!

The Micromax Evok Note runs on Android 6.0 Marshmallow topped with company’s own UI which is very different from what we experienced on Dual 5. 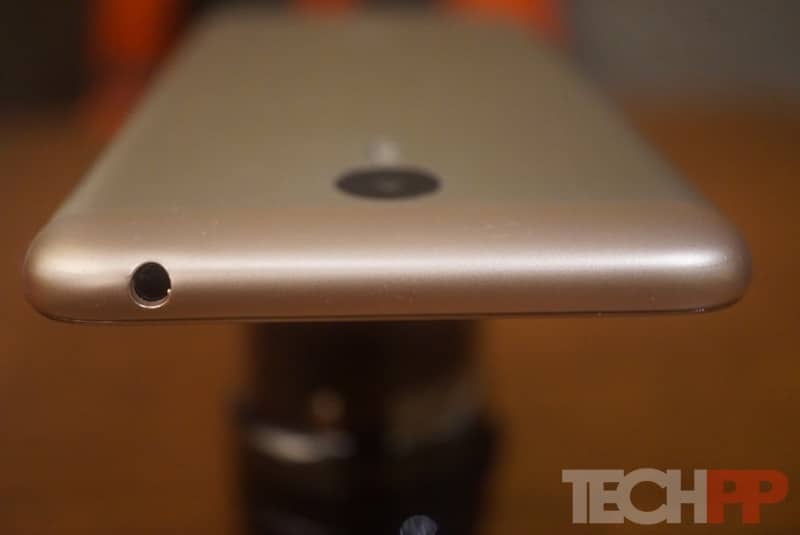 We felt the UI overall was a little cluttered and came with a little too many apps. There are games, utility, shopping and travel apps amongst many others which some may consider a plus point but for us, it was just a clutter of apps, some of which we might never use.

We also felt that the menu interface was also a little too complex. The apps were categorized by recently used in the first row and then by name in the rest of the rows. This was a tad confusing. The phone also had the app called SecureVault just like the one on Dual 5 but unlike on the Dual 5, this one is not quite as deep. You can open the app with the same fingerprint you unlock your phone with. You can hide images and encrypt apps in the vault and can even camouflage the app with the name of another app.

While we faced no major issues while using the phone we think the company just needs to simplify the UI a bit. Oh, and we would suggest clearing up the app clutter a bit.

Battery and other stuff

The Evok Note is powered by a 4000 mAh battery. The phone can get charged from 0 to 100 percent in about 2.5 hours. As for the battery life, the Evok Note can comfortably see over a day and a half under heavy usage and can easily last for around two days under medium usage. Another highlight of the phone in our opinion is the full HD display, which is colorful and bright. 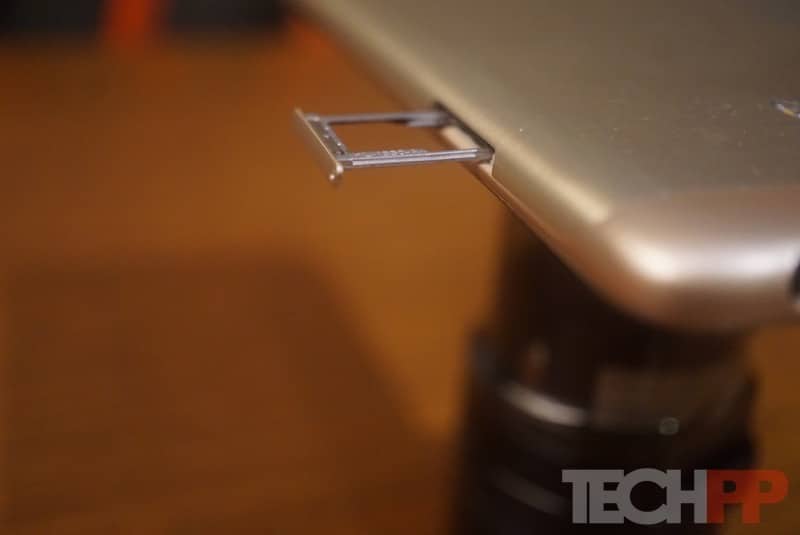 While the phone is a budget range contender, Micromax has made sure its user’s life a little easier by adding various accessories like a screen protector, phone cover and earphones (a rarity) at this price point, which we think is a very good move by the company. The sound on the earphones is also pretty good. We found them to be loud and clear, although a little short in the sound quality department (sound does get distorted at higher volumes). The phone itself has good speakers – not as good as the dual speakers on the K6 power but they were definitely up to the mark for the most price.

Return of the Micromax era? 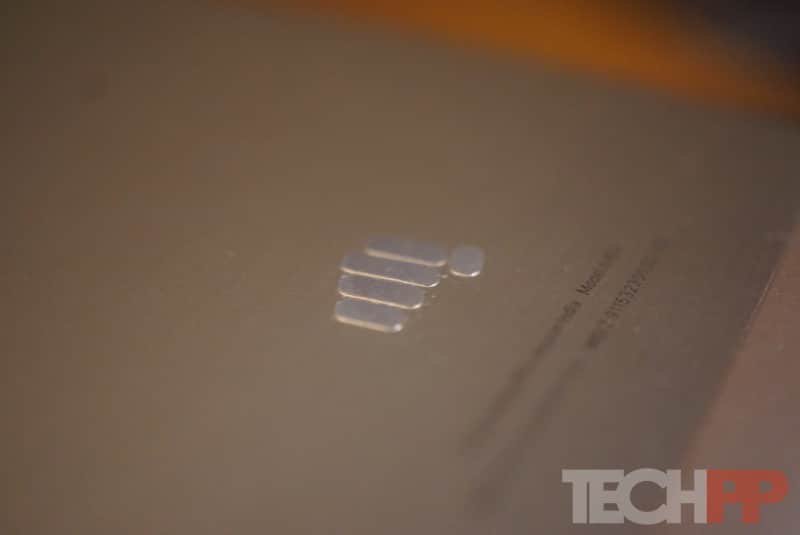 Micromax’s budget range knight, the Evok Note is really balancing its act on a very thin wire. While it has ticked off some boxes with a moonwalk, there are some spaces where the phone has struggled to even crawl. So, it is pretty much two extremes meeting in one phone. But the USP of the device is its price. We think the phone for its price is definitely a contender in the race, especially given its battery life, design and display. But is this going to “Evok”e the golden past of Micromax? It will have to get past the likes of the Xiaomi Note 4, Lenovo K6 Power and Moto G5 to do so.

Micromax is on the way back indeed. But the road is not an easy one.

Micromax makes a comeback with the launch of IN Note 1 and…
Redmi Note 10 Review: The Most Note-ish Note of the Lot
Redmi Note 11T 5G Review: A Redmi Note 11, but not THE Redmi…
S Pen: From Note-worthy to Note-able to Side Note?
Dear Micromax, Welcome Back...But Can We Talk of the Phones,…
Micromax 2.0: First Impressions - All Product, No "Cheeni"!