Xiaomi has opened its first Mi Home in India. It is a small showroom inside the Phoenix Market City mall in Bangalore which will be open to the general public from 20th May. Xiaomi has plans to open at least 100 such stores across India (specifically in Delhi, Mumbai, Hyderabad and Chennai) by the end of this year.

The brand which made online flash sales fashionable in India is going big offline with these Mi Homes. No, it is not like Xiaomi did not have an offline presence in the country. The brand had been associating with a few distributors and retail chains across India for the past couple of years, but Mi Home presents a unique opportunity – to directly deal with customers while giving them an option to physically check products before purchasing.

There is a teensy-weensy catch, though.

Xiaomi does not yet have the license for Single Brand Retail Trading (SBRT) in India. So, the company has smartly gone with ‘partners’ who will be running the Mi Homes. “The current Mi Home is a franchise based set up as we do not have the SBRT license to sell on our own. This Mi Home operates on the same guidelines as that of any other Mi Home store in China“, says Manu Kumar Jain, Vice president, Xiaomi and Managing Director, Xiaomi India.

This is very similar to what Lei Jun, the Founder and CEO of Xiaomi, had told a select media gathering a couple of months back when he was in India. “Our next biggest challenge is to emulate the e-commerce efficiencies in the offline world. We are trying this in China already, but it’s a bigger challenge in India. But we will crack it,” Lei Jun had remarked in March this year. “We crossed $1 billion in revenue in India in 2016. My target for Manu is to go past $2 billion in 2017“.

The Mi Homes look like the perfect ploy to fast-track to that goal of $2 billion in revenues. Despite the surge in the Internet access in general and e-commerce in particular, a majority of Indians still prefer to purchase smartphones offline.[pullquote]All the products will always be in Stock at Mi Homes[/pullquote] As per the recent estimates, over 70 percent of smartphone sales still happen offline. Even those who make up their mind to buy online, have to fight it out for the stocks, as Xiaomi’s devices usually run out of stock within a day if not within hours (and sometimes, minutes too). Thankfully, Xiaomi promises that all products will always be in stock at the Mi Home. “Even if some product is out of stock, we will give an f-code coupon to the customer so that he/she can purchase the same on mi.com,” says Manu Jain. “No one will return empty-handed when looking to purchase our products“. 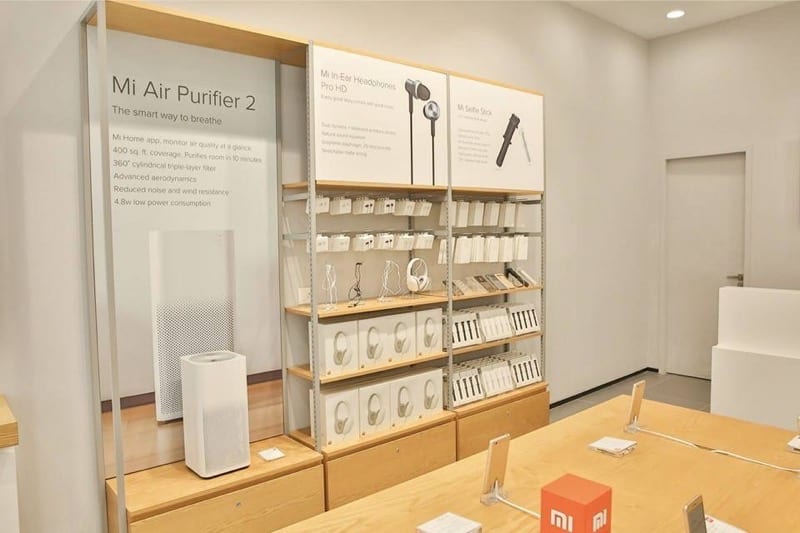 Xiaomi is not commenting who these ‘partners’ who will be running the Mi Homes are. Interestingly, its application for SRBT is pending with the Indian government. Speaking to TechPP, Manu Jain says “We hope to get it (SRBT license) soon. We have submitted our application and supporting documents. Currently, the DIPP and Commerce Ministry have approved it and we are waiting for any further update.” The Indian government recently relaxed the norms for FDI in Single Branded retail in the country. Foreign brands like Apple, Ikea and Xiaomi have applied for the same and are awaiting approval. There are specific requirements like at least 30 percent local sourcing that Xiaomi needs to ensure, and they probably have figured that out.

It is still not clear what will happen once Xiaomi gets the SRBT approval from the Government. Will it continue with the franchise model? The company is not ready to comment on that yet, but it will surely be interesting as ideally, it would like to eliminate even that one extra layer to reach their customers. But while we wait to find that out, for the brand’s fans in the country, we can simply say that “there’s no place like Mi Home.”

Was this article helpful?
YesNo
TechPP is supported by our audience. We may earn affiliate commissions from buying links on this site.
Read Next
With Football Manager 2023 Touch, Apple Arcade finally has its “killer ...
#india #mi home #Opinion #xiaomi