You’ve probably heard about it by now. The raging global ransomware appropriately named “WannaCry” that has crippled hundreds of thousands of computers in 150+ countries until a killswitch stalled its proliferation. While most of the world is talking about how their machines can be restored and safeguarded, another debate recently soared that shamed Microsoft over not rolling timely security updates for its older operating system that still power a significant number of PCs, most notably Windows XP. 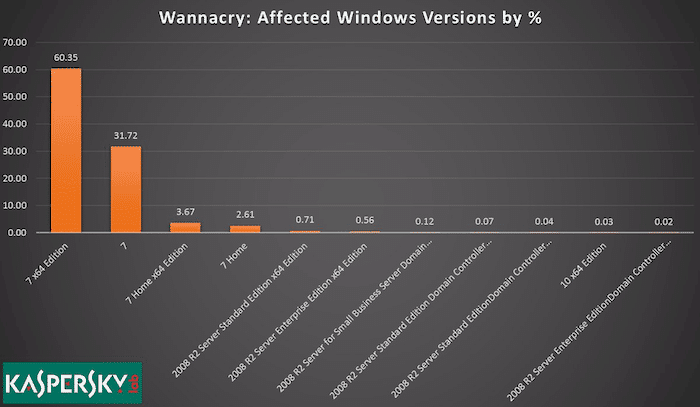 But that was based on the premise which suggested older operating system were the most targeted due to their aged firewalls. However, that’s not true at all if a new report by Kaspersky Labs is believed to be correct. According to data recently published by the security firm, an astonishing 98 percent of the affected devices were running some or the other version of Windows 7. On the other hand, less than one in a thousand were powered by Windows XP making it almost insignificant for the discussion.

The statistic seems now obvious as well considering how incredibly popular Windows 7 is especially among corporate organizations. The operating system accounts for roughly four times as many users as Windows 10 worldwide. Despite that, though, the Redmond giant did roll out security patches even for the 16-year-old Windows XP and Windows Server 2003 when in fact, they had no obligation to do so since the company has officially dropped support for these systems years ago.

The crucial issue almost no one is noticing while ranting on social networks about how irresponsibly Microsoft has handled this is that government offices and other companies have been operating on outdated software for ages due to their propensity for avoiding change. There’s no doubt that attacks like this will return and Microsoft won’t be kind enough every time to attend them. Windows 10 is safe and that’s what matters to them really.

Moreover, general users also have a tendency to ignore and in some cases, disable software updates completely. Microsoft has been aggressively pushing these after Windows 10 primarily to circumvent these situations and make sure everyone’s on the latest release. While their ways to do it can be wrong, there’s nothing inappropriate about it. Hence, I would strongly recommend you to update your computer regularly or else you’d wanna cry as well someday in the future.

Was this article helpful?
YesNo
TechPP is supported by our audience. We may earn affiliate commissions from buying links on this site.
Read Next
10 Amazing Facts about Microsoft Windows you Probably Didn’t Know
#Kaspersky Labs #report #WannaCry #Windows 7 #windows xp