Touch, focus and click. These are the three basic steps that are there to click a photograph these days – more often than not through a smartphone. Clicking a picture nowadays is often as simple as saying “cheese.” But what is child’s play now, was a tough task even for professionals a few decades ago. Just like every field and form of art, photography has been through its share of developments, highs, and lows, moving from a nice hobby to the mainstream obsession it is today. A few days after the celebration of World Photography Day, we thought it was only fair that we took you through some lesser-known facts about the art that has so many of us going cheese almost every day all around the world: 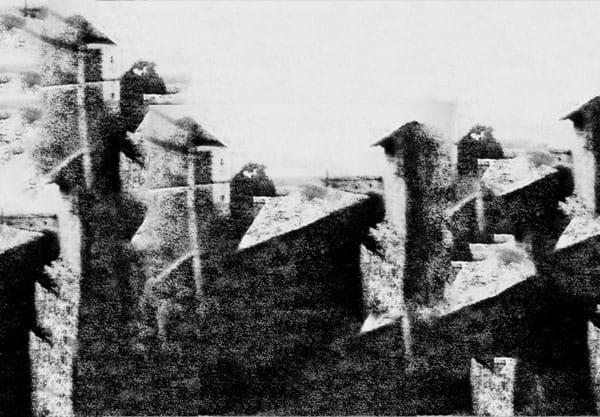 One of the first photographs ever taken is believed to be “view from the window”. It was taken in 1826 by Joseph Nicephore Niepce where the exposure of the shot lasted for eight hours. Back in those days, taking a picture was not as easy as pressing a button. The cameras in those days would take several hours to capture a picture on the film.

Hold that smile? Maybe not!

Guess what, in photography’s early days, people did not really smile in pictures. It is not that they did not want to, it was just because they could not. It took hours to capture a photograph on film as it took several hours for the film to get the right exposure. Try to hold a convincing smile for a few hours for a picture, and you will know why so many of the early photographs were minus grins.

Is that a chair or the mother?

Now, if capturing a smile was such a task, imagine how difficult it must have been to capture children. In a word: very. In those days, mothers had to sit all covered, looking like chairs, holding the hands of their kids, in order to get one photograph. Crazy, isn’t it?

Obscure beginnings…or rather, obscura ones!

There is a lot of dispute about who made the first camera. But before the photographic camera came something called camera obscura, which literally means “dark room” in Latin and refers to the phenomenon when the image on one side of a screen is projected through a small hole in a screen and forms an upside down (inverted) image on the other side. The only way to preserve images was to trace them manually!

People say that the first reference to the concept of a camera comes way back in the pre-Christ era from Chinese philosopher Mozi (470-391 BC). Early “cameras” were almost room-sized, and it was not until the nineteenth century that a relatively portable camera was made – although credit for envisioning it is often given to Johann Zahn in 1685. Photography then moved on in the nineteenth century to using plates and George Eastman, the founder of Kodak, is credited with bringing out the photographic film in the late nineteenth century. The first-ever digital camera was designed by an engineer called, Steve Sasson. He was an engineer in Kodak Company and designed it way back in 1975. The camera weighed 8 pounds and recorded only black and white images of 0.01 megapixels and took 23 seconds to create the first photograph. Hey, it was a BIG deal back then. 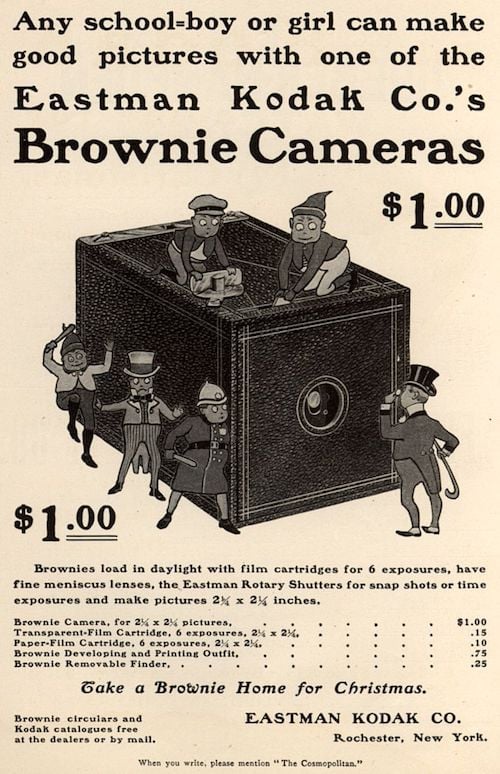 After the most expensive camera sold in the world, let’s get to one of the most inexpensive ones. George Eastman in 1900 introduced the Brownie camera which was made up of a cardboard box and worked with a wooden film carrier. It sold for – wait for it – ONE DOLLAR! The slogan was “You push the button; we do the rest”. It was named after the wildly popular cartoon series by Palmer Cox. It is considered to be one of the most important cameras in photographic history because it was so accessible and affordable. The Brownie Camera series was manufactured right until 1986 and remains a landmark for mainstream photography.

Cameras share a bit of history with guns. When cameras were initially being manufactured, Colt revolver mechanisms were used as models for some dry plate cameras, and even the design of early movie cameras was said to be based on the Gatling machine gun. Is that why taking a photograph is referred to as “shooting”? We wonder…

The Moon has 12 Hasselblads, how many do YOU have?

Humankind’s first trip to the moon is pretty historic. In 1969, the first human being landed on the moon (never mind the controversy mongers) on Apollo 11. And to capture this historic move, the astronauts took along 12 Hasselblad cameras to document the first ever moon walk. But unfortunately, the Hasselblads’ journey to the moon did not turn out to be a round trip. The astronauts decided to drop the cameras on the moon, in order to take some lunar rock along. Priorities. Left the moon holding a dozen Hasselblads, though. Some of us are SO jealous. 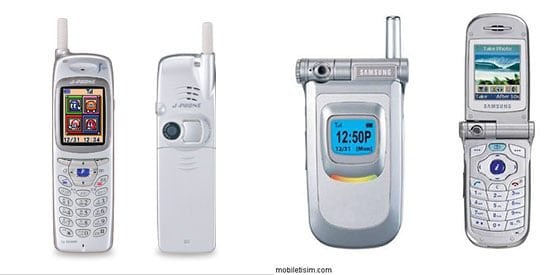 What of camera phones? Well, there is some controversy out there too. Some say the first phone with a camera was the Samsung SGH-V200, while others say that Sharp’s J-SH04 was the first real camera phone. Both came in 2000. Everyone laughed at the idea. The rest, as they say, is history…

A camera worth a million bucks? 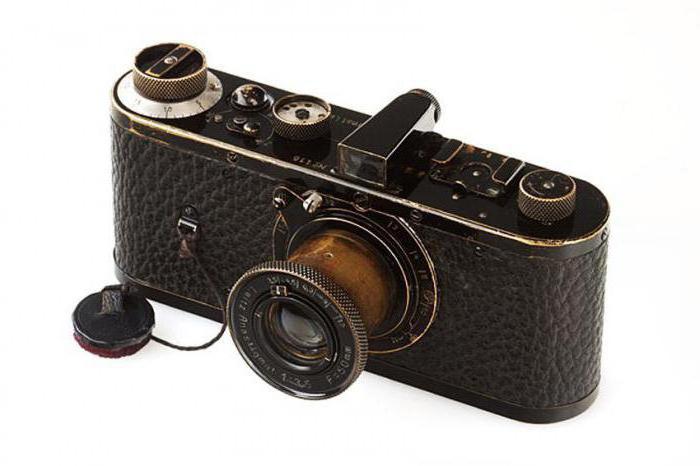 The most expensive camera ever sold in the world is a Leica O-series camera. It was a 1923 prototype for the groundbreaking Leica A, the first commercially successful 35mm compact camera. Only twenty-five were made, and it is believed barely a dozen survived. The camera was sold at an auction in Vienna in 2012 for about USD 2.8 million.

The most viewed picture? Pure “bliss” 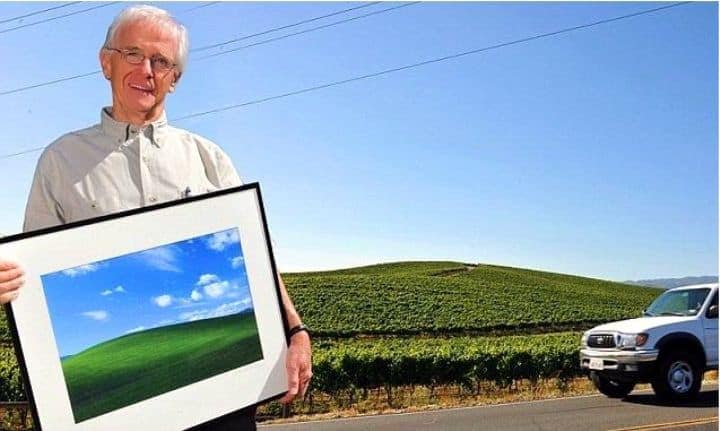 The most viewed photograph in the world is believed to be a picture taken by Charles O’Rear in 1996 called “bliss.” You might not know its name, but we are pretty sure that you have seen it a fair number of times. The picture was the default background of computers shipped with Windows XP. O’Rear took the picture on a film with a medium-format camera and while many claim that the photograph was digitally manipulated, O’Rear claims it never was.

Better in a group than alone – the Cheerleader effect

Want to look better? Just be a part of a group shot! No, we are not kidding. According to a research by Drew Walker and Edward Vul at the University of California, individual faces appear more attractive in groups than when present alone. The phenomenon is known as the “Cheerleader effect.”

Have you ever noticed that one side of your face looks better than the other in side profile snaps? What’s more, it is generally the left side of the face that looks better. A study by Kelsey Blackburn and James Schirillo from Wake Forest University showed that the left side of our faces is perceived to be more attractive than the right side. As per the research, this is because the left side of our face tends to exhibit a greater intensity of emotion as compared to the right side, which is usually more pleasing to the observer’s eyes. Next time you want a profile snap, offer your left side!

Photography began slowly but then grew at a rate of knots. In 1999, the year in which film-camera industry was on peak, Kodak reported that people took around 80 billion photos. Today? It is very difficult to find the exact numbers of pictures taken now, but as per an estimate, around 3 trillion photos were taken last year. Or maybe more!

And one more thing…

The man with more than a thousand cameras

If you are a photographer and think you have a great collection of cameras, think of Dilish Parekh of Mumbai, who holds the Guinness World Record for owning a collection of 4,500 cameras. He has been collecting cameras from 1970 and the oldest one he has dates back to 1907.

Was this article helpful?
YesNo
TechPP is supported by our audience. We may earn affiliate commissions from buying links on this site.
Read Next
Wordle Game: Ten Facts About the Latest Rage on the Internet
#Case in Point #Photography