Google launched its very own digital payments app in India called “Tez”. It’s a relatively straightforward UPI-based platform with a couple of more tricks up its sleeve. This includes “Cash Mode” that lets you send/receive money without having to exchange any sort of private information and support for a bunch of local languages. However, there are still a few glaring differences between Tez and other existing digital payment solutions. 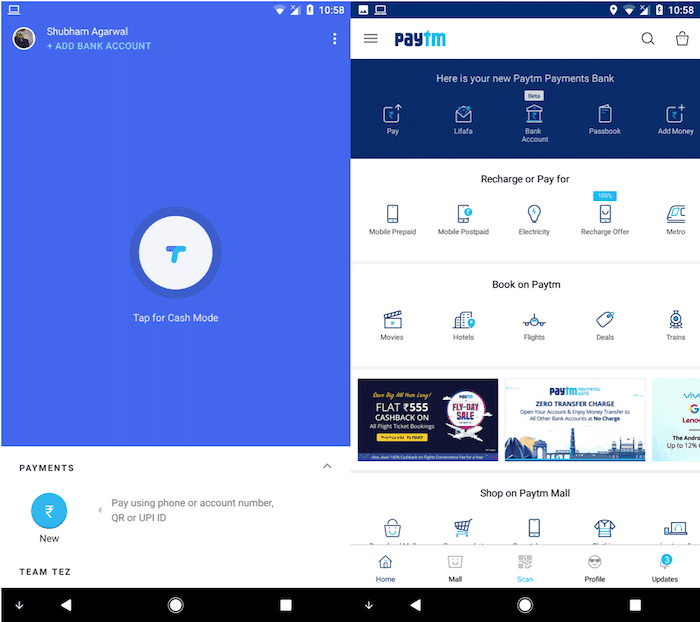 Paytm is the country’s leading digital wallet service and in no way, similar to Tez. Tez, first and foremost, is not a digital wallet and integrates directly with your bank account. Paytm does support UPI payments for recharges and bill payments but the app is largely known for its wallet services. Speaking of recharges, Paytm also comes packed with a plethora of interfaces for paying your bills, shopping, movie tickets and more. While not as comprehensive and flexible as Paytm, Tez does have a business section where you can pay enrolled partners directly and receive offers from them. Paytm is also available on the desktop, unlike Tez’s mobile-only approach. Both of these do support peer-to-peer transfers, but Google Tez has the advantage of “Cash Mode” I mentioned earlier. Although I don’t think that will be enough to lure users into leaving Paytm for Tez. 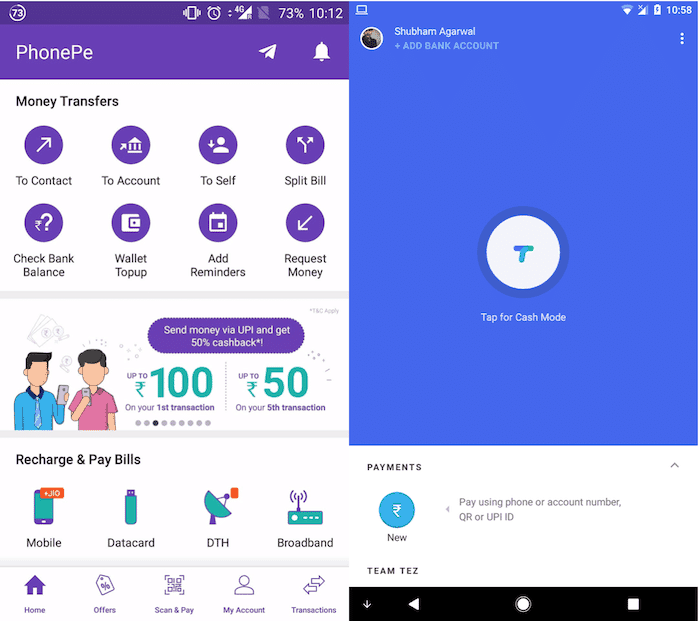 PhonePe, in a lot of ways, is like Paytm and hence, its comparison with Tez is largely identical to what we discussed above. However, PhonePe also features native UPI integration if you don’t want the hassle of topping up the wallets. PhonePe is primarily known for deals and offers on various services, something which Google is advertising with Tez as well. Theoretically, Google Tez seems to be benefiting from a marginally better security architecture by enabling an always-on fraud detection system. For someone who’s just looking for a straightforward payments app, Tez is a better platform thanks to its minimalistic interface.

PhonePe and Paytm are apps that will appeal to the masses thanks to their wide range of supplementing services. Google Tez, on the other hand, will require initiative from businesses themselves which can take awhile.

BHIM can be considered as Tez’s identical twin. Both of these lack any sort of additional direct services and rely on UPI for digital payments. Tez, however, does has a few extra features including Cash Mode, a significantly better design, support for businesses, and deals, something which is absent on BHIM entirely. Although BHIM recently added a section for splitting a bill with your friends which isn’t available on Tez. More or less, there are not any substantial differences between these two and at the end of the day, it comes down to personal preferences. If you’re someone who is looking for a barebones UPI app, BHIM seems like the way to go as it requires much less clicks for a transaction.

Then there is the myriad of UPI apps by individual banks such as “BHIM SBI Pay”, “BHIM PNB”, “BHIM Axis Pay”. All of these, more or less, are rehashes of the BHIM app. Therefore, the difference between them and Tez is similar too.

It’s also worth noting Google Tez connects with your Gmail account as well which is a rarity these days on mobile payment apps. However, that might be for storing your most contacted users or the messages attached to transactions for a particular person. But making email ID mandatory makes it more cumbersome than others which only require your Phone number. Google Tez is available for iOS and Android. If you want to know more about it, make sure to check out our detailed guide for starters.

Was this article helpful?
YesNo
TechPP is supported by our audience. We may earn affiliate commissions from buying links on this site.
Read Next
Snapdragon 782G vs Snapdragon 778G Plus: What Has Changed?
#BHIM #comparison #Digital Payments #Google Tez #Paytm #PhonePe #UPI