Google is today launching a new premium Chromebook under its Pixel line of hardware products called the ‘Pixelbook’. The new hybrid computer comes with a four-in-one design so that you can use it any position such as a tablet, tabletop position or just as a regular laptop. 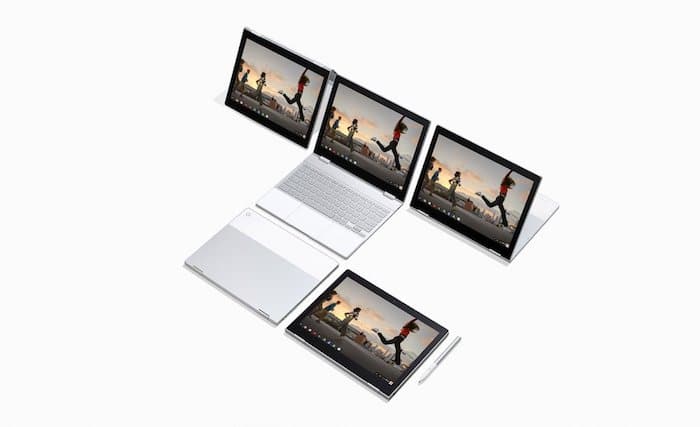 The Pixelbook features a sleek aluminum design that weighs merely a Kilogram. There’s a 12.3-inch LCD touchscreen up front with a resolution of Quad HD. It is powered by either an i5 or i7 processor, up to 16GB of RAM, and 512GB of storage. Google promises a battery life of 10 hours and it charges through a USB Type-C port.

The Pixelbook is the first Chrome OS computer to feature the company’s virtual assistant. There’s even a dedicated key on the keyboard for invoking it. Furthermore, it supports something called ‘instant tethering’ that automatically switches to your phone’s mobile data when WiFi is not available. You don’t need to manually turn on the hotspot. Of course, it is also compatible Play Store apps and Google is now working with more developers to bring better apps suited for the larger screen.

Along with the Pixelbook, Google is also introducing a $99 stylus. Apart from sporting an accurate tip, there’s a button on the top through which you can take a screenshot and scribble over it. “Pixelbook Pen uses machine learning for handwriting recognition, and we’ve reduced latency to just 10 milliseconds—so it feels as fast as writing with a pen on paper.“, writes Google on its blog.

The Pixelbook starts at $999 for the base configured and will be available starting from this month’s 31st.