Microsoft’s Edge Browser Arrives on Android and iOS in Preview

Another browser app to ignore on the app store

As rumored a few days ago, Microsoft is making its Edge browser available for Android and iOS users. The app functions just as you’d expect and lets you resume your active tabs on a Windows 10 computer. However, it is currently limited to users part of the company’s Windows Insiders program. You can sign up for the same here.

Microsoft Edge on Android and iOS comes the usual trappings of a mobile browser including Favorites, Reading List, and a Reading View as well. The cornerstone here, however, is the fact that it allows you continue browsing where you left off across devices with the “continue on PC” feature. Although the app, as of now, misses out on a range of aspects required for a wholesome browsing experience. One of these is the lack of Tab Syncing which is quite baffling considering it is already syncing with your Microsoft account.

In order to achieve this compatibility, Microsoft had to employ each platform’s native web engines instead of their own. Hence, it remains to be seen whether Edge on iOS and Android will be able to perform the way Microsoft is advertising. 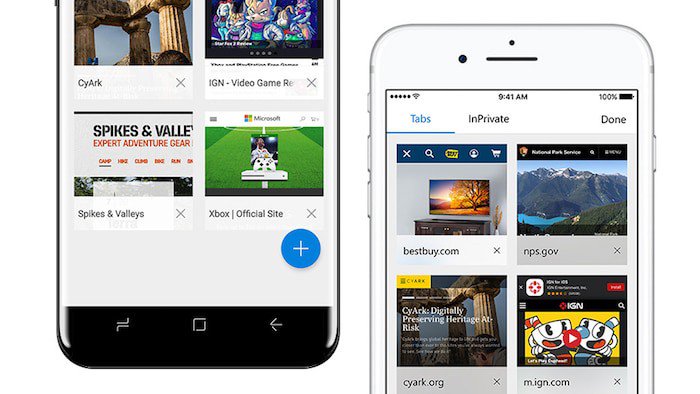 The new tab page on Edge largely resembles what Google has done with its Chrome browser. You are greeted with a news feed that is based on your search history and two columns of the most visited websites. It follows Microsoft’s minimalistic design language with a bright background and blue accents for elements like buttons. Microsoft is hoping to release Edge for Android and iOS out of preview “later this year.”

Along with Edge, Microsoft also rebranded its Arrow Launcher to Microsoft Launcher. Apart from a few design enhancements, the updated app also comes with the “Continue on PC” feature through which you can push things such as Outlook emails to your desktop computer or text from Clipboard. I briefly tried the new launcher but found it to be disappointing and plagued with performance hiccups. You can try it out yourself from this link.

Motorola Edge and Edge Plus with 90Hz OLED Display and…
10+ Microsoft Edge Tips and Tricks to Improve Your Browsing…
How to Hide or Spoof Location in Google Chrome, Microsoft…
Mi Browser Pro, Xiaomi's Built-in Browser on MIUI Banned by…
Poco M3 with Triple Rear Cameras and Snapdragon 662 arrives…
[Stat Stories] The iPhone Rules 2019 and Q4 2019, as Xiaomi…