Kids owning smartphones doesn’t exactly strike out as something surprising. In fact, I have personally observed how kids are comfortable with smartphones and they either borrow their parent’s smartphones or get their own. However, every time a parent hands over his smartphone to their kid, they lose access to the same and it’s also difficult to monitor for what the device is being used for. 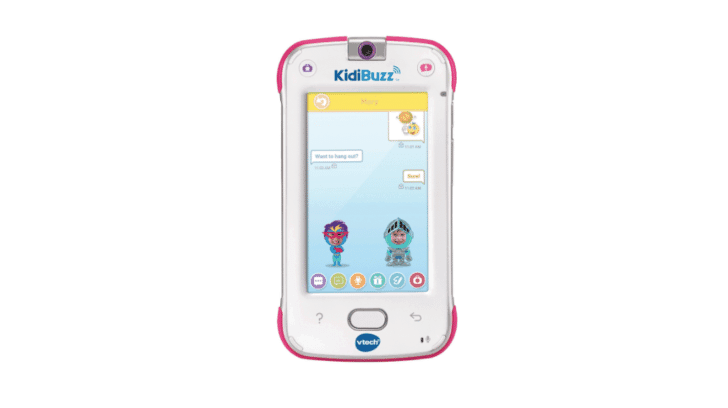 A company called Vtech has come up with Kidibuzz, a phone that is designed exclusively for kids. The KidiBuzz makes use of the KidiConnect app and lets children send texts, paintings, drawings, animates stickers and also voice messages. All of the websites available are clubbed under the “popular pre-approved websites.” The children can also access music and watch videos from these websites. That’s not all, the KidiBuzz features a rotating 180-degree camera that can be used with funny frames and photo effects.

The device comes preloaded with 40 educational games and apps. One will also be able to download other popular Android apps. With Kids being kids the device comes with a shatter-safe screen and bumpers that will protect them from sharp edges or broken glass fragments. The Kidibuzz is designed for children aged 4-9 and is already available on Amazon, Target and Walmart. Despite being priced at $100 the KidiBuzz is available on Amazon, Target and Walmart at a discounted $79.99.

One of the biggest drawbacks here is that the KidiBuzz will not work in an Apple ecosystem. That is if you or your family members use iPhone and iPad, the KidiBuzz is rendered useless. The statistics mention that an average American kid consumes media and uses a phone for 9 hours in a day and the Kidibuzz seems to be a nice way of making sure the children have access to the stuff that is relevant to their age group.

Xiaomi Mi Kids Watch 4 and Kids Watch 4 Pro Announced
Handing your phone to a friend? Make sure they can use only…
Mozilla Firefox VPN Service Made Available for Android and…
100+ Mac Keyboard Shortcuts You Should be Using to Work More…
Reliance Jio reportedly developing JioBook: an…
Amazfit Bip S Review: The Only Budget Smartwatch You Should…