HMD Global is likely to launch the Nokia 2 in India this Tuesday, October 31. In the meanwhile, the device has made an appearance on AnTuTu benchmarks and thus all the key specifications are out in the open. The Nokia 2 is expected to be the companies take at an entry-level Android smartphone, a device that will shape as a much affordable option to the Nokia 3. 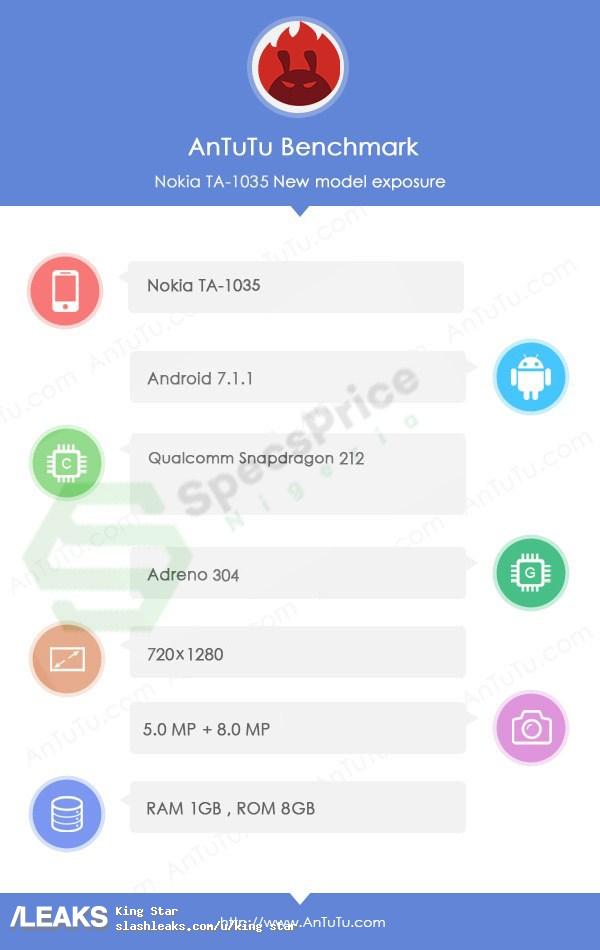 The Nokia 2 has appeared on AnTuTu listing with the Nokia TA-1035 moniker. The Nokia 2 has been spotted earlier at Bluetooth Certification and the model numbers at both the instances match. Moving on, the Nokia 2 is listed with a 5-inch HD display and the device is expected to be powered by Qualcomm Snapdragon 212 SoC which comes with four ARM Cortex-A7 cores clocked at up to 1.3GHz and mated with 1GB RAM. On the graphics front, the Nokia 2 is expected to feature Adreno 304. Earlier a leaked B&H listed the Nokia 2 at $99.

The Nokia 2 listing also reveals a meagre 8 GB of onboard storage and Android 7.1.1 Nougat build. The camera options on the Nokia 2 is listed as an 8-Megapixel sensor at the back and 5-Megapixel sensor at the back. That apart, it seems like we have to wait for the HMD event tomorrow for more details. On a related note, the Nokia 2 is expected to arrive at a much lower price point as opposed to the Nokia 3. This also means that the Nokia 2 will be the most affordable Android smartphone from the HMD Global stable and will go at loggerheads against the Xiaomi Redmi 4A and other budget contenders. As per some of our sources, the Nokia 2 might be priced at Rs 6,999 (~$107) in India.

HMD Global is responsible for developing and marketing the new generation of Nokia smartphones that come powered by Android. The company has launched an entire lineup of Nokia devices with the Nokia 8 being the flagship offering. HMD Global also tried their hands at resurrecting an iconic feature phone and thus gave the world the recent Nokia 3310.

TechPP is supported by our audience. We may earn affiliate commissions from buying links on this site.
Read Next
Nokia Power Earbuds Lite Review: Connecting through Clear Audio against Tough...
#AnTuTu Benchmarks #HMD Global #nokia #Nokia 2