I have a confession to make: I use Samsung’s Internet browser on my non-Samsung Android phone. It’s been awhile too. Back in November, the Korean OEM liberated the app from its own devices and released it for everyone. The launch was largely ignored as why would you install a Samsung app on your phone by choice. And who would have thought it was competent enough to challenge the Chrome ascendency.

Well, for some reason, I did. In a hope to humor myself, I decided to give it a try. I even configured it as my default browser and replaced the sacrosanct Chrome icon on the home screen with Samsung’s more jaunty-looking purple one. And three weeks later, it’s still there. I’m surprised myself and this is, believe it or not, the first Samsung product I’ve personally employed for more than a couple of days. Here’s why you too should switch to it. 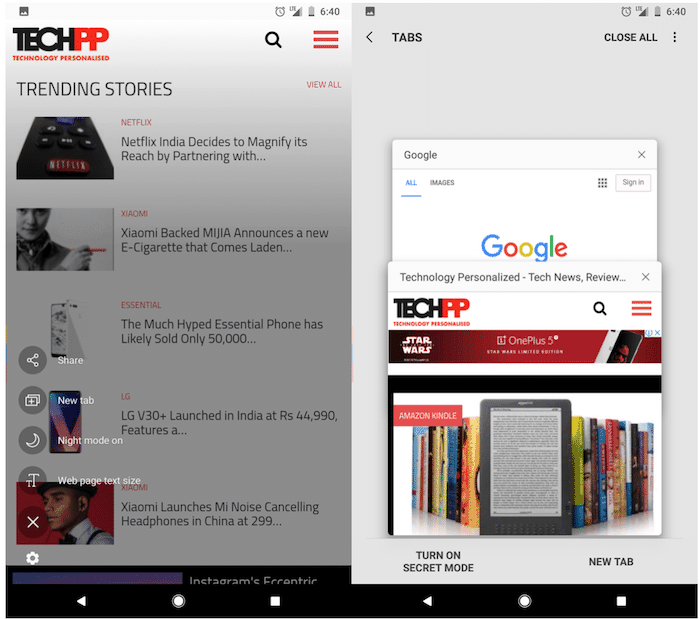 Firing up the unintuitively named ‘Internet Browser’ won’t excite you either. It features a familiar, bland design that seems to be based on a standard look. A bottom row holds buttons such as ‘Home’, ‘Tabs’, ‘Back/Forward’, and ‘Bookmarks,’ and on the top, you’ll find an address bar along with a three-dot menu that contains a bunch of additional options and occasionally, a link for turning on the Reader Mode. I do wish, though, they bring the omnibar to the bottom just like Chrome did recently.

But that’s where the similarities end.

The differences begin from the floating menu anchored at the bottom left corner. It brings a couple of handy shortcuts to your palm’s reach including ‘Share’, ‘New Tab’, ‘Text Size’ and lastly, my favorite — a switch for enabling the Night Mode. The Night Mode is one of the most prominent factors that can potentially drive you towards the idea of leaving Chrome.

It essentially applies a dark coat on every website and interface elements of the browser. Unlike its counterparts which merely put up a layer over the app, the Samsung Internet Browser (I hate typing that every time) revamps the site’s background for adapting to the mode. Therefore, if you’re anything like me — a night owl — you’ll absolutely appreciate this feature. 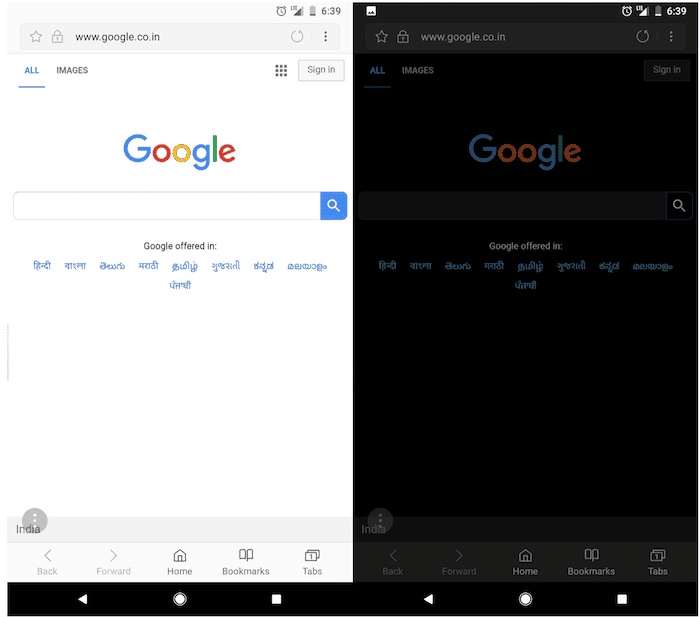 In addition to that, the design for the page which shows all of your tabs is quite impressive and comes with a modern aesthetic featuring deeper shadows and a card layout. Instead of the industry accepted ‘Incognito’ setting, Samsung has bundled something called ‘Secret Mode’ which mostly works as you’d expect it to. However, you can even enable a security code so that no one else can view the active tabs when the app is minimized. For some reason, you can’t simultaneously switch between the normal and Secret mode which could be a deal breaker and seems a bit counter-intuitive. Perhaps, in a future update, the company might add the ability.

The other significant reason behind why Samsung’s Internet Browser outpaces Google Chrome is the performance. In most scenarios, the app renders websites relatively quickly and efficiently. The lead is even more apparent when you start scrolling articles and web pages. The Internet Browser is surprisingly better in that regard especially when the website has a ton of resource-intensive components.

Samsung Internet Browser is also compatible with third-party extensions. However, the collection is rather limited right now. There’s an ad-blocker, QR code reader, the aforementioned quick access menu and a few more. Among these, the Video Assistant extension is the most useful one if you ask me after the floating menu, of course. It adds a bunch of nifty shortcuts to a web video player such as lock rotation, 360-degree view and also lets you watch it in a pop-up window. 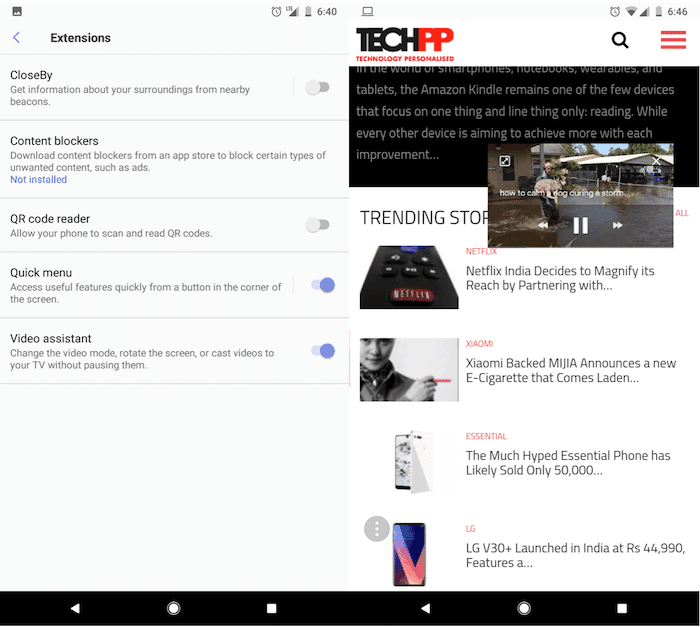 The app offers most of the other trappings of a browser as well like privacy settings, autofill, what have you. Samsung also made a Chrome extension for syncing your bookmarks. The only caveat it suffers from is the fact that you can not view your history or active tabs from other non-Samsung devices. It can, though, exchange such data between various Samsung devices such as televisions, tablets and on a VR headset too.

I will still, though, continue using it as my primary browser and you should probably too just because of the performance advantages. However, there’s a chance it won’t take Google long to catch up. Until then, Chrome will be sitting idle in my phone’s app drawer.

Was this article helpful?
YesNo
TechPP is supported by our audience. We may earn affiliate commissions from buying links on this site.
Read Next
With Football Manager 2023 Touch, Apple Arcade finally has its “killer ...
#android #apps #Opinion #Samsung internet browser