The Internet is sometimes queer. Recently, a new trend took the internet by storm. The trend or rather the frenzy was to find their doppelgangers in portraits hung at the museum. While the resemblances may have not exactly been accurate, people nevertheless kept comparing themselves with the portraits. Google seems to have lent a keen ear and is going to make the entire affair of finding your “Museum” doppelganger easier with the “Google Arts & Culture app.” 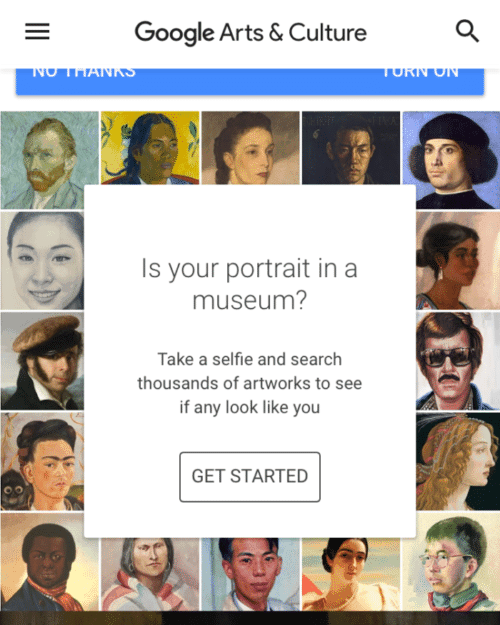 The first time you open the app, it pushes a popup that says “Is your portrait in a museum?.” The popup is accompanied by “Get Started.” While this might actually sound pretty straightforward, it actually isn’t. The new portrait matching feature is region locked and the only way you can get it working is by using a VPN and setting your location to the U.S. It’s also worth mentioning that the app has climbed the App Store rankings after introducing the new feature and currently sits at the top.

Apart from circumventing the regional lock using the new Portrait matching feature is quite easy. Select the “Get Started” on the Pop-up. Take a selfie and upload the same. The computer vision technology used by the app will tell you which famous artwork you resemble.

That being said, the app needs to upload your live pictures and doesn’t let you access the gallery. Sometimes its quite possible that you may not get a match, in such cases try changing your expression. The bonus is that the app ranks every match with a percentage that tells you to what extent your face matches to the one in the portrait. The Google Arts & Culture app still seems to be perfecting the feature and are likely to become more accurate in the future.

Was this article helpful?
YesNo
TechPP is supported by our audience. We may earn affiliate commissions from buying links on this site.
Read Next
How to Split Screen on Chromebook [3 Easy Ways]
#google #Google Arts & Culture