[Face-Off] Honor 9 Lite vs Xiaomi Mi A1: Battle for the Budget Crown

They are both contenders for delivering great specs and software to you at a super affordable price. One from a Chinese player that is number two in the smartphone world, another from one that is number one in the Indian smartphone market. Both come in different shades and can turn heads. And both claim to be the best in their segment, but which of the Xiaomi Mi A1 and the Honor 9 Lite is the device for you? Let’s find out (we took the 4 GB / 64 GB edition of the Honor 9 Lite, as it has the specifications most similar to the Mi A1) 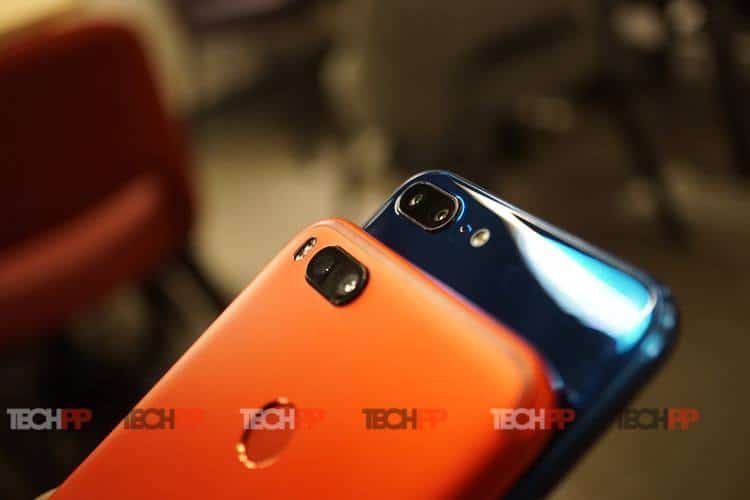 We decided to make this a confrontation between the two most sensational looking variations of the devices – the red Mi A1 and the blue Honor 9 Lite. And well, although the red Mi A1 is definitely an attention grabber with its sleek metal frame, we really think that the mirror finish on the Honor 9 Lite is something else. The 9 Lite simply is the most premium looking device in its price segment – of course, that back will pick up smudges, but we think people will not mind polishing it. Also the 18:9 aspect ratio means that the 9 Lite is able to pack in a 5.65-inch display in a frame that is smaller than the one housing the Mi A1. The Mi A1 is good looking, no doubt, but the 9 Lite is the beautiful one here. 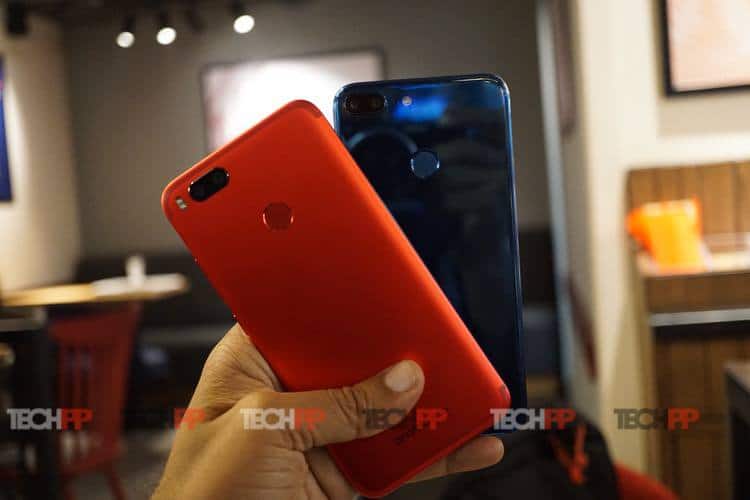 Both phones come with decent processors – the A1 has the Snapdragon 625, while the Honor 9 Lite has the Kirin 659, and both come with 4 GB RAM and 64 GB onboard storage (expandable). Both come with Android Oreo (the Honor 9 Lite out of the box, the Mi A1 thanks to an update) and both have dual cameras on the rear. But there the similarities end. The Honor 9 Lite boasts a larger 5.65-inch FHD+ display as compared to the 5.5-inch full HD one on the Mi A1. And then there are the cameras – the Honor has dual cameras (13 megapixel plus 2 megapixel) on the front and back, while the Mi A1 has dual 12-megapixel cameras on the rear, but a rather modest 5-megapixel shooter in front. The Mi A1 scores with a slightly larger 3080 mAh battery as compared to the 3000 mAh one on the 9 Lite, but the display and the cameras score this one for the 9 Lite. 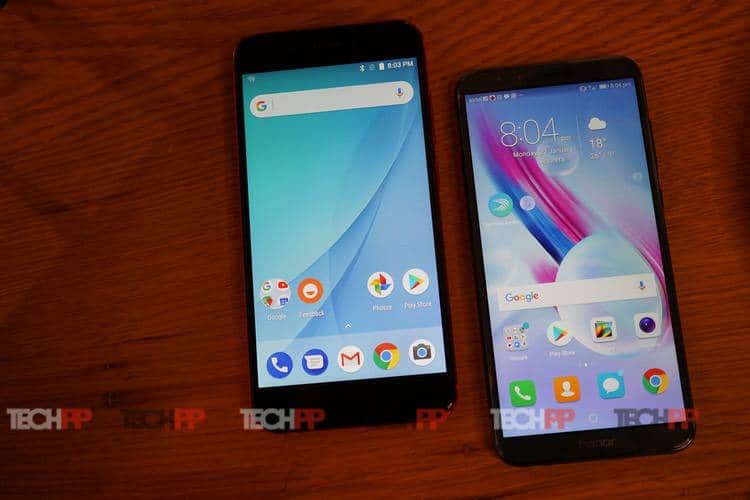 Both phones now come with Android Oreo, but the difference is in the UI. While the Mi A1 is part of Google’s Android One project and comes with a stock Android interface, the 9 Lite comes with the latest Honor UI, EMUI 8, running on top of Android Oreo. Which works better depends on your preference. Geeks might prefer having a plain interface that they can customize, but many users, especially mainstream ones, have a thing for colorful UIs with lots of features and EMUI scores there. Of course, the Mi A1 is also assured of Android updates as it is part of the Android One project but again that is a feature that would appeal more to geeks. We think this is a very close round and depends on what you prefer, although we think the clean stock Android and assured updates might tilt the odds in the favor of the Mi A1. 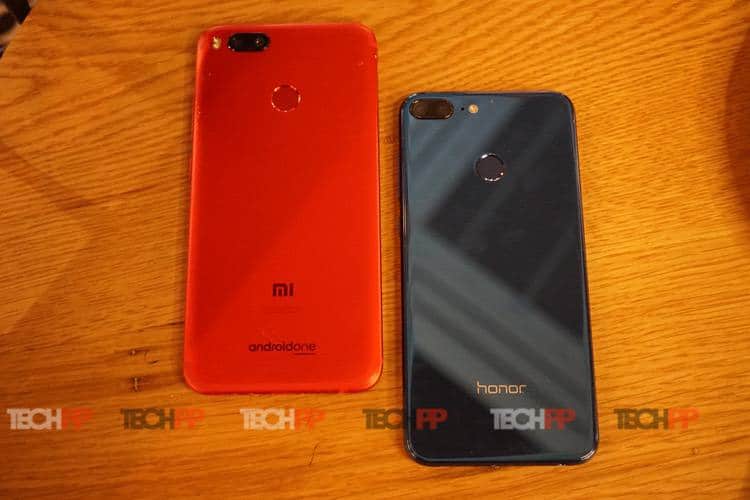 The Honor 9 Lite and Mi A1 both sport dual cameras at the back, but they are used differently. The Honor 9 Lite’s 13-megapixel and 2-megapixel camera combination is mainly for bokeh and great depth of field shots, whereas one of the two 12.0-megapixel sensors on the Mi A1 is a telephoto, providing up to 2x optical zoom, although the Mi A1 also delivers a portrait mode. Both devices come with elaborate camera setups and in good light conditions, take great shots. The Honor 9 Lite, however, lets you play with the aperture size while taking a shot, letting you work out how much bokeh you want. We would say the rear cameras are all said and done, equally matched and perhaps the best at this price point. However, when it comes to the front camera, the selfie edge is with the 9 Lite with its dual 13 megapixel and 2-megapixel camera combination delivering far better selfies than the 5. This is a battle between four cameras and three – and the quad cameras of the Honor 9 lite win it this round. Mind you, if it is just rear cameras you are considering, you would be hard pressed to choose between them.

Both phones are very good at handling casual games and multi-tasking. Both also tend to stutter a little in high-end gaming territories. In this scenario, the quality of display and sound come into play, and while both devices tie in the audio department, we think the 9 Lite’s larger and higher resolution display wins it the round. It is a tight finish, but the 9 Lite is the better one here, because of that display.

You would have thought that with its stock Android interface, the A1 would stamp all over the 9 Lite, but the battle turns out to be much closer. Both phones have their moments of stutters, and the 9 Lite can at times seem sluggish in the camera department, but then it also does let you do a whole lot more there. For a stock Android device, however, the Mi A1 does not quite deliver the level of smoothness a lot of us are used to. We would say this really depends upon preference – those preferring simple plain, speed would go for the A1, while those not minding the odd pause as long as they get more features would choose the 9 Lite. 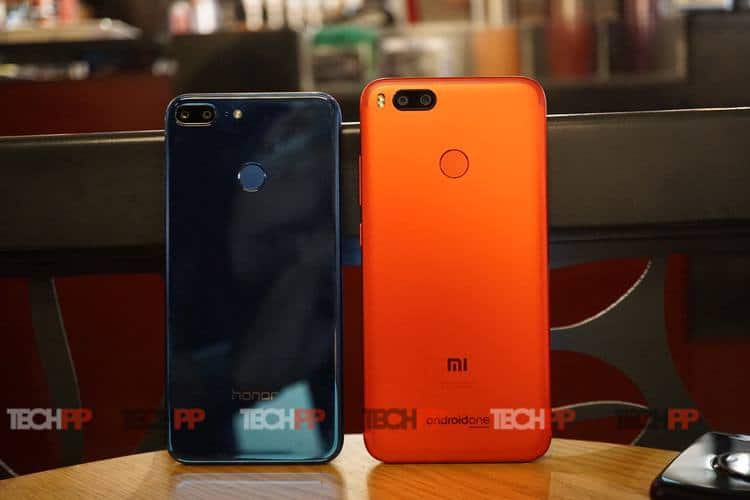 On the face of it, this round would seem to go with the Mi A1 as its (revised) price stands at Rs 12,999 at the time of writing, while the Honor 9 Lite is priced at Rs 14,999. A closer look, however, shows that the 9 Lite does add a lot more to the package for those extra bucks – that higher resolution and larger display, more cameras and a rather eye-catching design. Yes, if you are absolutely strapped for cash, then the Mi A1 might seem a better option, but if you are looking for a more comprehensive offering, then the vote would go to the 9 Lite. Actually, if you are on a really tight budget, we would even recommend going for the 3 GB/ 32 GB storage edition of the 9 Lite, which retails for Rs 10,999, without sacrificing much on anything.

It had seemed like a close battle initially, and it actually was, but the Honor 9 Lite keeps coming out on top against the Mi A1 at the crunch. The stock Android crowd might be scandalized at this, but all things considered, the Honor 9 Lite seems a much better proposition than the Xiaomi Mi A1. It simply offers much more in those three vital areas – cameras (especially selfies), design and display. Do not go by the ‘Lite’ moniker, please.