Xiaomi’s aggressive push into the smart television market was clearly a signal to the rise of a fresh, new competitive battleground in India. And Vu seems to have taken the cue early on as the company is today introducing a new series of Android TVs called Vu ActiVoice. To kick things off, Vu is bringing it in three awfully similar sizes — 43, 49 and 55 inches, all of which surprisingly have a 4K panel. It will be available exclusively on Flipkart starting from this month’s 16th. 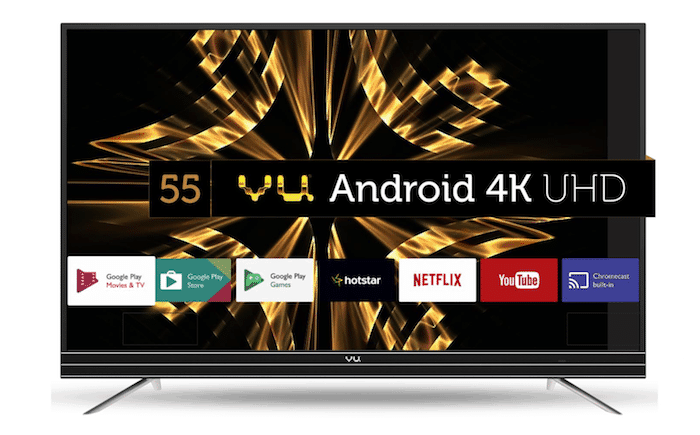 Vu says the biggest highlight of these new televisions is the fact that they’re first ones to feature Android Nougat in India (which we aren’t really sure yet). And since all of them natively run Android without a custom skin on top unlike Xiaomi’s Mi TV lineup, you get all the Google-y novelties like the ability to download apps as well as games from the Play Store, OS-wide voice control, Google Assistant, Chromecast support, Netflix, and more. However, there’s also a downside to that — ActiVoice doesn’t have any operator integration which essentially means cable content doesn’t sync with the smart interface.

In addition to that, the ActiVoice televisions come with a 20W soundbar at the bottom, a quad-core processor, 16GB of onboard storage, and 2.5GB of RAM. They’re compatible with Dolby and DTS TruSound as well but unlike the Mi TV 4 55-inch, the screen is not compatible with HDR. The port selection comprises of three HDMI, Ethernet, a standard headphone jack, and two USB. The table stand and wall mount are bundled with the TV which is nice. The 55-inch variant weighs 14 kilogram which is 3kg lighter than the Mi TV 4.

Was this article helpful?
YesNo
TechPP is supported by our audience. We may earn affiliate commissions from buying links on this site.
Read Next
What is UPI Lite and How to Enable it on Any Device [2023]
#ActiVoice #india #Launch #smart tv #Vu