Google had been talking about how they will introduce a new feature that will allow Android users to test a game before they install/buy it. Google has finally introduced the feature as “Google Play Instant.” In 2016, Google had introduced Android Instant app which allowed users to test our certain features of the app without actually having to download the same. 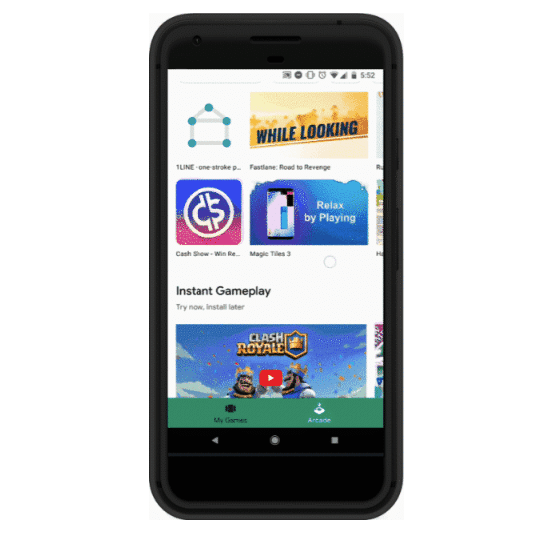 With the new Google Play Instant feature, one can simply try a game without downloading it. Currently, the list of games includes Clash Royale, Words with Friends 2, and Bubble Witch 3 Saga, Hothead games and other famous titles. That being said, this is just the first batch of games, and we are pretty sure that Google will add a lot more in the future.

Accessing the Google Instant Play games is pretty straightforward. All one needs to do is open the PlayStore and go to the “Instant Gameplay collection.” Alternatively, you can also search for your favorite game and check out if it supports instant play. All of the Google Instant app versions of the game are less than 10MB in size, and this will also help you to save on internet data. You can also head out to the “Arcade” tab and search instant games here. Moreover, Google is also bundling gameplay videos and news related to the gaming title in question.

The Instant Play is still in beta, and according to Google, it will go public by this year-end. It is also worth noting that the gameplay for Instant games is not more than 30 seconds, neither too little nor too much. In hindsight Google is working with other leading game development platforms including Unity, Cocos and others to add IDE support. This step is aimed at helping the developers build instant apps. Needless to say, the corresponding tools required for the same are already available on the Play Console, and this includes an internal testing track.

In a nutshell, Android wants to help its users when it comes to content discovery; this move is also likely to help users who want to test a game before buying the same. The non-availability of a trial on the Apple App Store has been very frustrating, to say the least, let us hope they take cues from Google and implement something similar.

Was this article helpful?
YesNo
TechPP is supported by our audience. We may earn affiliate commissions from buying links on this site.
Read Next
Evanesco! How to use Google Pixel’s Magic Eraser to make things vanish ...
#google #google play instant