Breezing into the premium smartphone segment

The Nokia 8 Sirocco is perhaps Nokia’s first real go at the premium smartphone segment since its comeback under the HMD banner. Yes, we did have the high-end Nokia 8 in the latter half of 2017, but in spite of some interesting shades, it was more of a competitor for the budget flagship crown than a premium player, slugging it out against the likes of the OnePlus 5/5T rather than the more expensive Android flagships. The Nokia 8 Sirocco sets its sights much higher, adding a lot of style to what was already a very substantial Nokia 8 – oh and a lot of bucks too, in price terms. Of course, it is too early to say whether it justifies that higher price tag and makes itself right at home in the premium smartphone segment, but we can sum up our initial impressions in these eight (of course, it WOULD be eight) points: 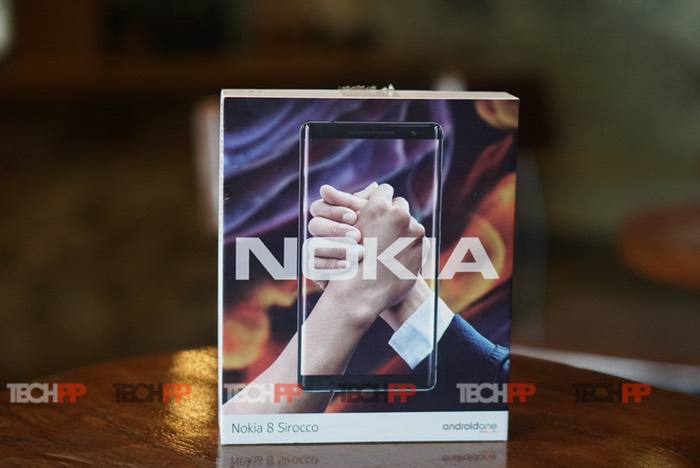 We have been told that the outer surface of the Nokia 8 Sirocco is an amazing 95 percent of glass, and well, it shows. The phone shines, courtesy Gorillas Glass 5, even though it is available in a single black shade. There’s no other way of saying it. There’s glass in front, glass behind and glass even tapering over gently over the sides (in a manner that is very reminiscent of the Edge devices from Samsung). Some might mutter about the smudges both pick up (especially the back), but there’s no denying that it leaves one glassy-eyed in a very nice manner. Shiny, very shiny. Thankfully Nokia has bundled a clear plastic case to keep the back smudge free. Our advice? Apply!

…and so much class 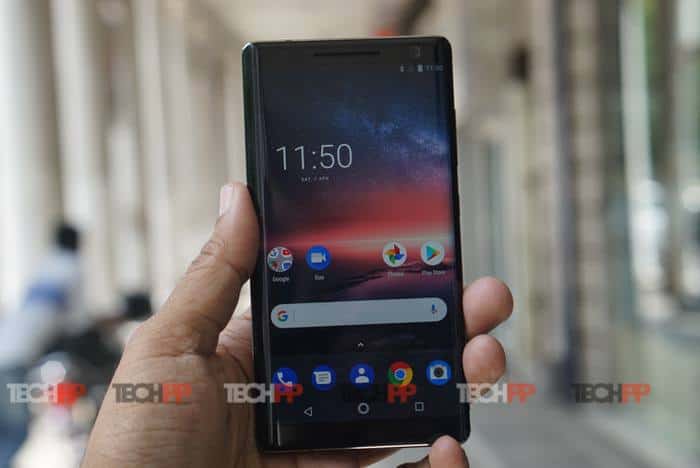 All that glass combined with some sleek finishing makes the Nokia 8 Sirocco look incredibly classy. The phone does not scream “premium” like some of its competitors, it just states the same in tones that are, well, stately. The steel frame on which the glass front and back rest is as jet black as the rest of the device and blends in so well that even the volume rocker and power/display button were initially difficult to spot (they are on the right). At 7.5 mm, the phone is very much on the slimmer side (it is even thinner at the edges) and at 140.93 mm in length, very compact. There is a USB type C slot on the base, and rather oddly the single SIM slot is placed on the lower side of the left of the device. The design is very minimalistic with no loud flourishes, although some might find the sides a little on the sharper side thanks to the ‘edgy’ finish. Unlike the Nokia 7 Plus, whose copper frame and camera and fingerprint sensor accents grabbed attention, the 8 Sirocco is more of an understated affair. The 7 Plus will turn more heads, but the 8 Sirocco will have more people staring. It’s more James Bond than Jason Statham – and it is dust and water resistant too.

Them dual cameras (and a modest third) 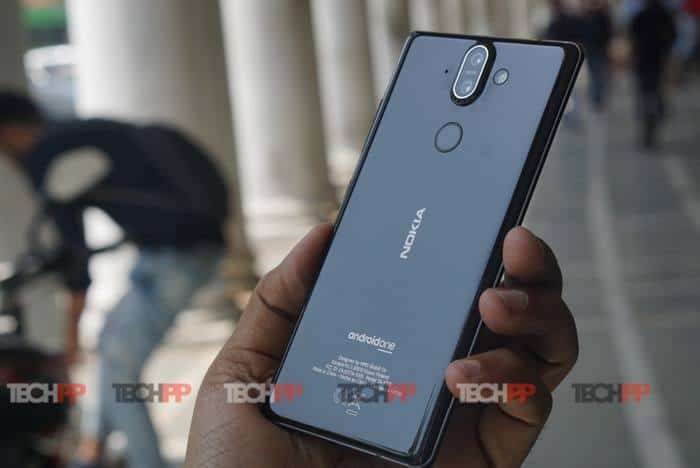 The Nokia 8 had seen Nokia join the dual camera brigade and its Sirocco avatar sees it stay there, complete with Zeiss optics. It comes with a 12.0-megapixel (f/1.7) wide-angle camera and a 13.0-megapixel (f/2.6) telephoto camera on the rear. The first lens has optical image stabilization, and apart from 2X optical zoom, we are also promised better low light performance. Yes, the Bothie (in which you can use both front and rear cameras at the same time) is very much in place, but we must confess at being surprised at the 5.0-megapixel count of the selfie snapper. Yes, we know megapixels are not everything, but we did expect a bit more in this department, especially considering the competition. Speaking of the cameras, the Sirocco also sees the return of the Camera Pro software that was a staple of the Lumia series – it is not everyone’s cup of tea, but we can see the sentimentalists being delighted at it.

That Android One goodness

The Nokia 8 Sirocco is part of Google’s Android One initiative, which means that it is assured Android updates for at least two years. Of course, Nokia has been doing a very good job in that department itself on its comeback trail, but we are assuming that the Android One tie-up will make the updates even more timely. The 8 Sirocco also becomes the most expensive and high-end member of the Android One tribe, which had started off with entry-level ambitions in 2014. That of course, is another story for another time.

Honey, no headphone jack, and no dual SIMs or memory card…

You might have noticed that we did not mention the 3.5 mm audio jack while talking about the design of the 8 Sirocco. And that’s because the device has none. Nokia, however, has bundled a 3.5 mm jack adapter in the box and also a set of USB Type-C wired earphones. Another spec sheet miss is the absence of dual SIM connectivity and support for a memory card. 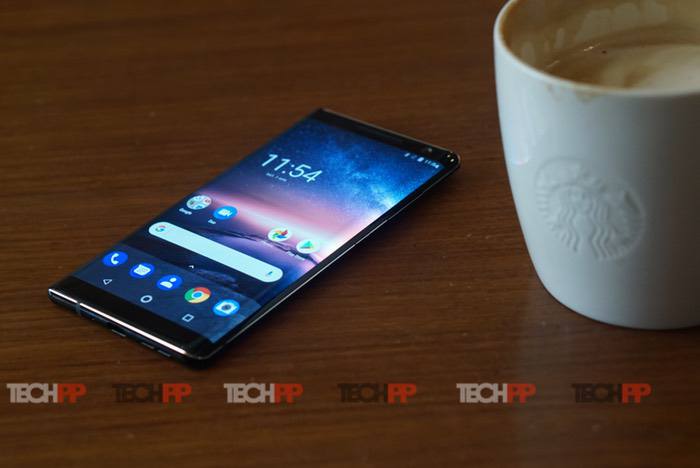 Yes, we deliberately left the spec sheet of the Nokia 8 Sirocco for last. No, not because it is a lightweight in this category (it is not), but because it really feels like a device that is more about design and feel than just good old hardware. Mind you; the hardware is very respectable – the 5.5-inch pOLED display might not boast the 18:9 aspect ratio that is the current rage in Celltown but has a quad HD resolution, and so far is a sight for sore eyes. Powering the device is a Qualcomm Snapdragon 835 chip with 6 GB of RAM and 128 GB of storage – some might complain about the absence of expandable memory, but 128 GB is quite a nifty number of bytes to have by most standards. Battery stands at a respectable 3260 mAh with support for wireless charging. Connectivity wise too the 8 Sirocco ticks off most boxes – 4G, Wi-Fi, NFC, GPS, and Bluetooth. The fingerprint sensor on the back seems speedy enough too. Nokia had packed a considerable punch into the audio capabilities of the Nokia 8, and the Sirocco edition gets similar treatment. Yes, there is just one speaker out there, but there are three microphones and support for Nokia’s Ozo audio, which should result in high-quality recording ability in the device. Of course, all this with Android 8 out of the box. This would have been super high-end a few months ago, but with tall 18:9 aspect displays and Snapdragon 845 devices becoming the rule, it might seem ever so slightly on the older side. 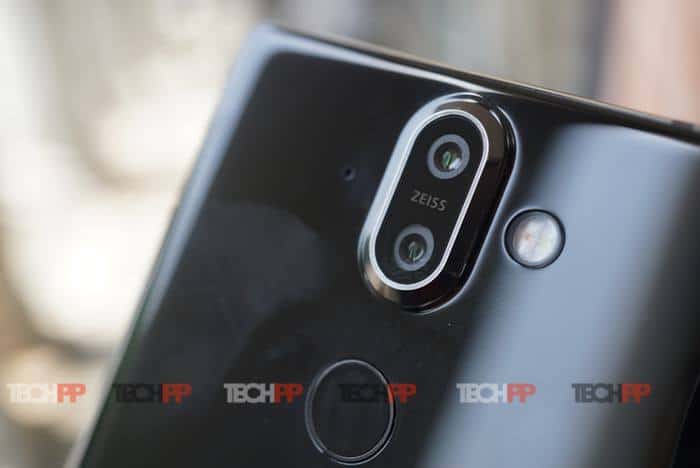 It does bring a fair bit to the table, but at Rs 49,999, the Nokia 8 Sirocco is definitely priced on the premium side. Interestingly, though it sits between the budget flagship fleet comprising the likes of the OnePlus 5T, the Honor V10 and the Mi Mix 2; and the more expensive flagships like the Galaxy S9, Pixel 2, and of course, THAT phone from Cupertino. Some might point at the absence of an 18:9 display and the now-older flagship processor, but we feel that this is pure nit-picking, as the device does sport a display flows over the sides, and there are barely a handful of Snapdragon 845 devices out there in the market (none of them in India at the time of writing). The display and chip accusations can actually be leveled at the Pixel 2 as well, which actually brings us to the final point…

With that spec sheet, that design and the Android One connection, and that price, the Nokia 8 Sirocco actually goes up against the darling of the Android brigade, the Pixel 2. For many, it has everything that the Pixel 2 has – pure Android with assured updates, great hardware and superb cameras (well, on paper, and dual cameras too!) – and also throws in a stunning design into the mix. And the very fact that we are being besieged by queries about how well it compares with the Pixel 2 should tell you something about the Nokia 8 Sirocco. Yes, we will do a comparison in the coming days. But as of now, we can safely say that Nokia has floated into the premium smartphone segment, and the wind beneath its wings is called, you guessed it: