OnePlus 6 Review: Settling Down, but Still a Flagship Killer

How much plus over the 5T?

It was launched with the tagline of Never Settle and branded the Flagship Killer. But of late, there have been signs that OnePlus has been, well, for want of a better expression, just beginning to settle a bit. Blame it on the relative lack of competition or slightly more premium ambitions, the brand that was known to set its own benchmarks has been accused of playing catch up – it was slightly late to the dual camera party, and also to the 18:9 display one. And honestly, we do not see those accusations ceasing with its latest edition. Not that it makes the device any less irresistible, just slightly more predictable. 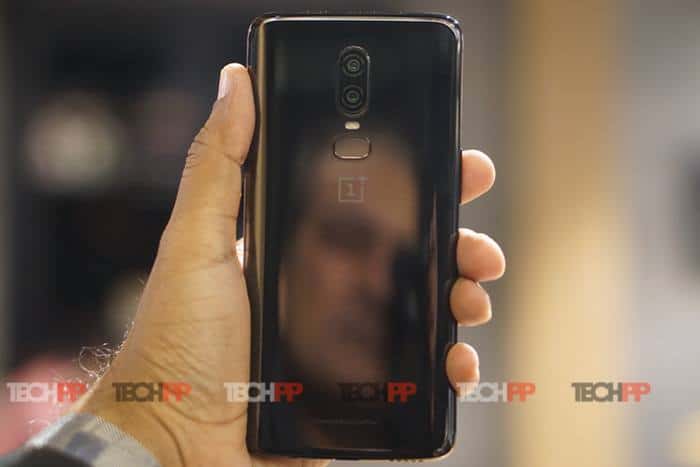 To be fair, OnePlus has tried to be different in design terms. The company has been tweaking the appearance of its device from the very outset – remember the Sandstone finish backs of the OnePlus One and 2 – and after a flirtation night with metal in the 3/3T and 5/5T, it now turns to glass, which seems to be the latest flagship favorite. Another flagship favorite that finds its way into the device is the much-maligned notch, within which are lodged the front camera and the earpiece. As we mentioned in our first cut, the device is more compact than its predecessor in spite of sporting a bigger display (thank you, notch) and although some might complain about the stains and smudges that glass back will pick up, one cannot deny that the OnePlus 6 is a looker. Those wanting to keep smudges at bay can opt for the Midnight Black option – it is glass all right, but thanks to some serious design wizardry, looks metallic. No, it might not be the first to use glass or a notch, but OnePlus has used them both well, and the result is that the OnePlus 6 is a very handsome smartphone indeed. Some of the design changes will take a little getting used to – we kept hitting the alert slider, which is now on the right side instead of the left, instead of the power button – but we think it is just a matter of time. Incidentally, while the alert slider itself has moved, we are delighted to see that its options have gone back to the “traditional” trio of “silent, vibrate, ring” instead of the “do not disturb, vibrate, ring” options in the 5T. 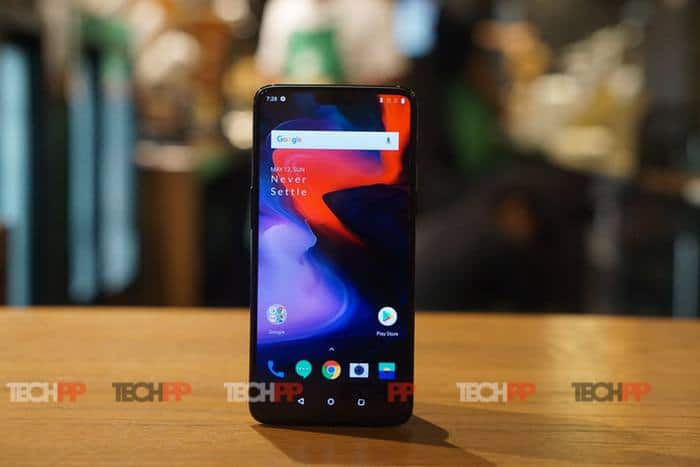 But if the design has always been open to change, what has not is the brand’s commitment to flagship level hardware within those externals. We must confess that we had expected a larger display to be perhaps accompanied by a significant resolution bump up, but OnePlus doggedly steers clear of quad HD land, and sticks with a 2280 x1080px full HD+ resolution. The display is still an AMOLED one and is brighter than the one on the 5T, but is still a notch (pun intended) below the ones we have seen on the Galaxy S9 and the P20 Pro – those worthies do cost one and a half times as much, let it be remembered. The processor remains the best Qualcomm can offer – a Snapdragon 845 (something even Samsung did not get to India) – and there is stacks of RAM (6 GB and 8 GB) as well as storage (64 GB / 128 GB / 256 GB) to go around as well. Round that off with cameras that have the same megapixel count (16 megapixel main and 20 megapixel secondary) but larger sensors on the back, and a similar 16.0-megapixel selfie shooter as in its predecessor in front; and all the connectivity options you would expect – 4G, NFC, Bluetooth 5.0, Dual-band Wi-Fi, GPS and all – and you have superb hardware to complement those good looks. And of course, running on top of all this is Android 8.1 with OnePlus’ Oxygen 5.1.3 UI – the phone is also part of the Android P beta program, and going by OnePlus’ update record, should get up to Android P soon.

Plus the usual smoothness 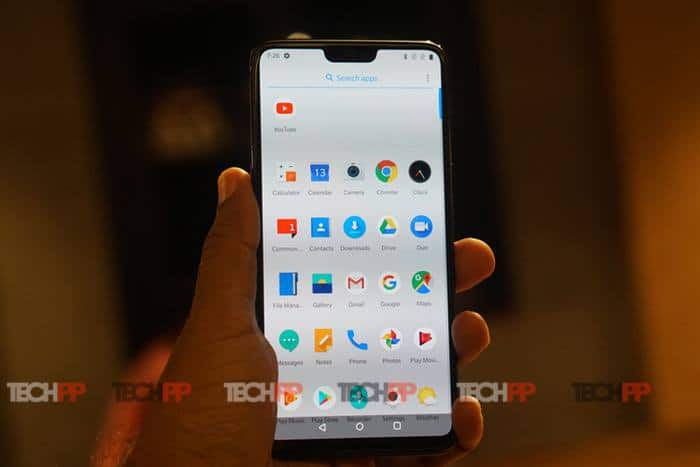 The big question, of course, is how does all this work in sync? The answer is: brilliantly for the most part. That combination of a fast processor and oodles of RAM means that there is literally nothing that the phone cannot handle, be it high-end games or multiple applications. There is even an improved gaming mode that will cut off notifications (other than calls and alarms) while you are playing games, optimize battery consumption, disable automatic brightness, and even boost your network connectivity while playing titles like PUBG. Performance-wise, this is a device right up there with the best anyone can offer – oh yes, if there is the speed you need, there is plenty of it and then some to spare here. The display is great for viewing videos, playing games and reading (yes, Oxygen OS has a reading more too), and while we do think that OnePlus missed a trick by not going with stereo speakers, the sound quality is decent.

OnePlus’ Oxygen OS is very similar to stock Android in appearance and is generally as smooth as that worthy. Although there are three onscreen navigation buttons, one can replace them with gestures that are rather similar to the ones seen on the iPhone X – swipe up from the center base for home, swipe up from the right or left of base to go back, swipe up and hold to see recent apps. Locating the gestures to activate them is a bit of a task – it is under “Buttons” and not “Gestures” in Settings, but the gestures themselves work smoothly enough, although we personally prefer the MIUI gestures that use the sides of the device.

A minor plus for the cameras 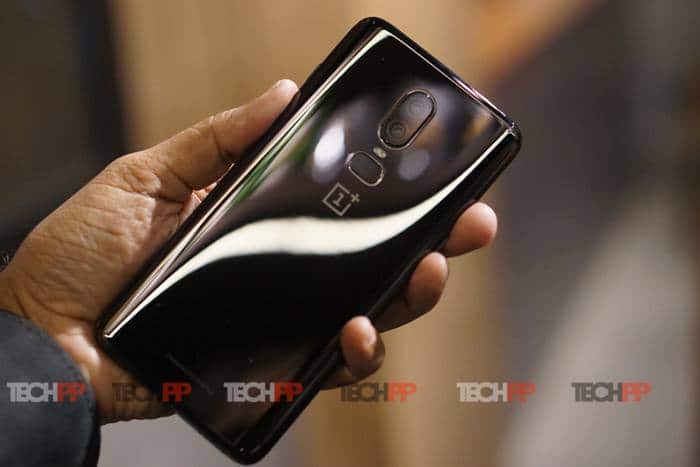 OnePlus had bet big on the cameras of the OnePlus 5, and the dual shooters on the device did see it enter the ranks of very good camera phones, even though it was well below that of the top players. Well, the OnePlus 6 does not see that change by much. Yes, the dual cameras are better than the ones we saw on the OnePlus 5T – detail, in particular, is excellent and low light performance is significantly improved. However, we found that the colors were frequently oversaturated – we got shades of pink even in a photograph taken in the afternoon in Delhi. Close-ups are decent, and we think that the cameras are great for food and people shots. Move onto landscapes, however, and colors start popping at a level that is unrealistic. Portrait mode, however, has improved by leaps and bounds with edges of the subject being more clearly identified. We hear portrait mode will be coming to the front camera via a software update too, but even without it, the front-facing snapper churned out some very good selfies. Videos are good as well, we now have 4K video recording at 60 fps, and the addition of super slow motion is a welcome addition. Super Slo-mo is restricted to 480fps on 720p or 240fps on 1080p which is way lesser than what some phones like the Galaxy S9 offer, but the best part is one can record slow-motion videos up to 1 minute in length on the OnePlus 6 as compared to a few seconds on the S9. The output is largely satisfactory under good lighting conditions. 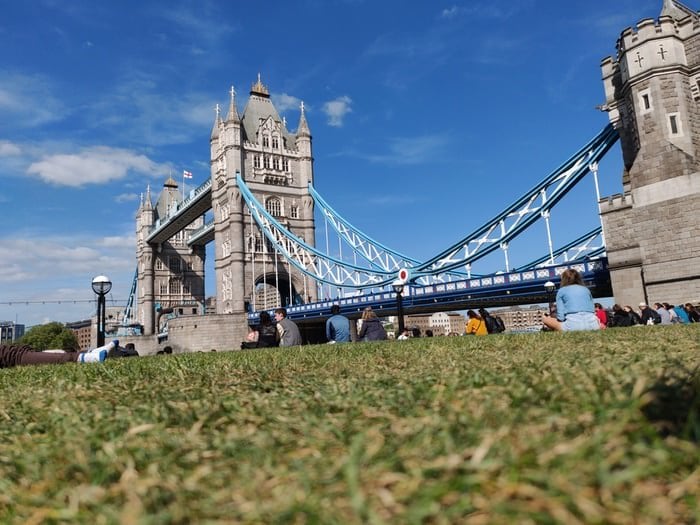 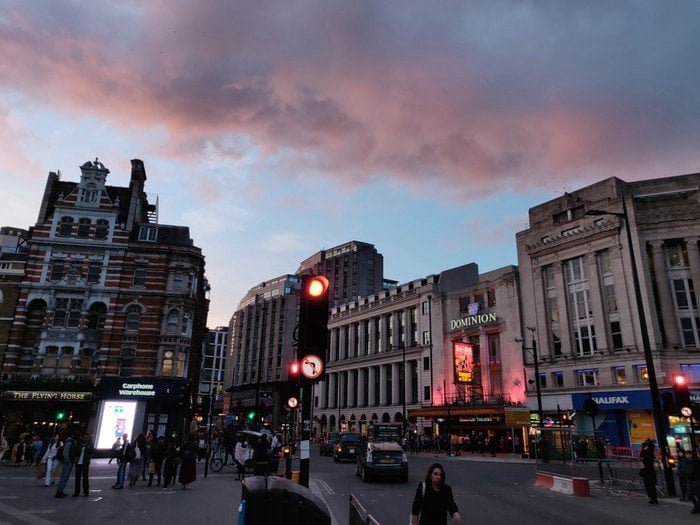 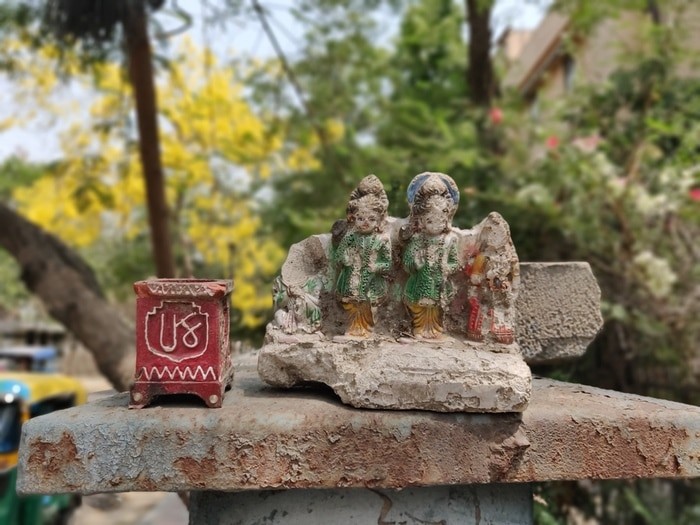 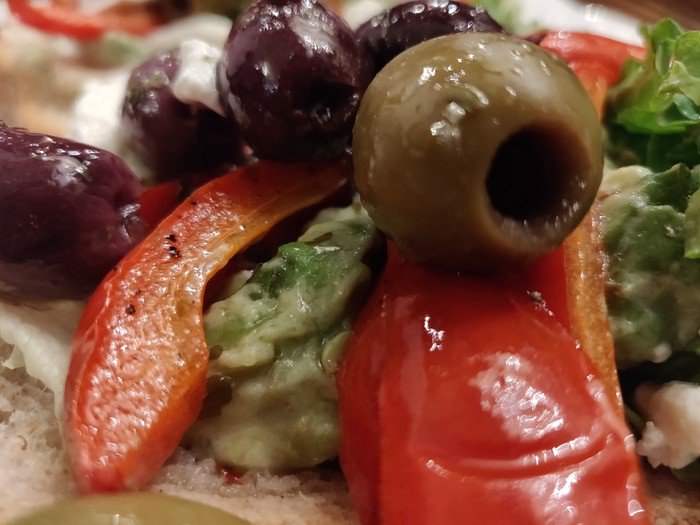 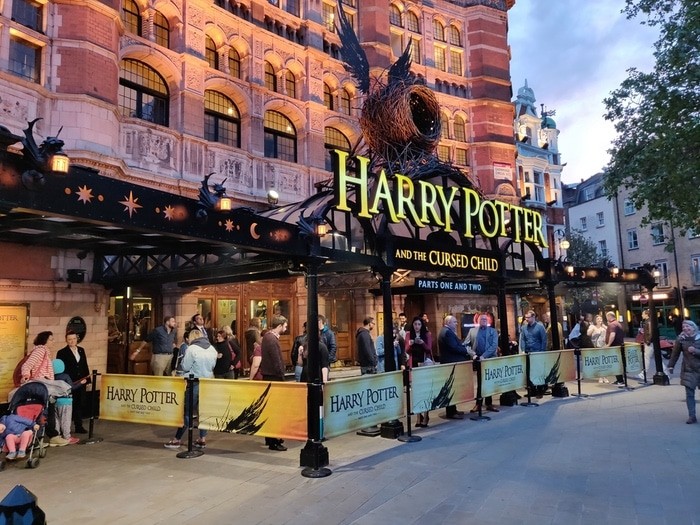 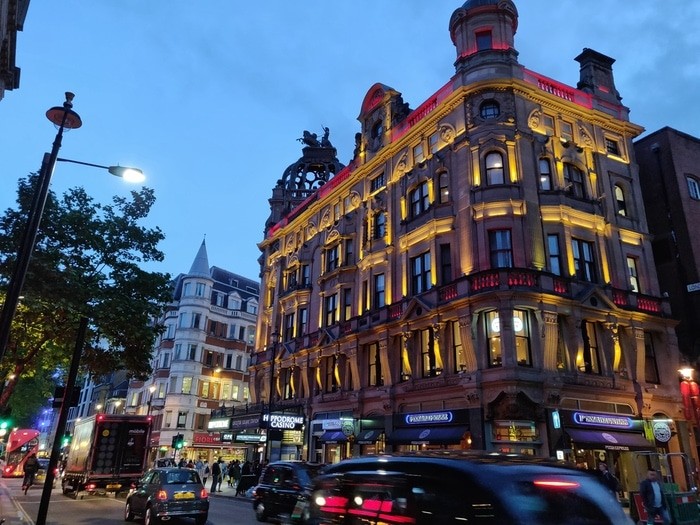 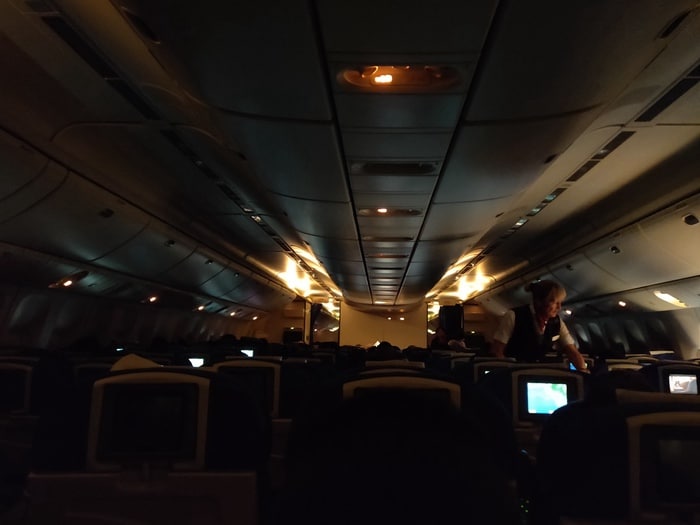 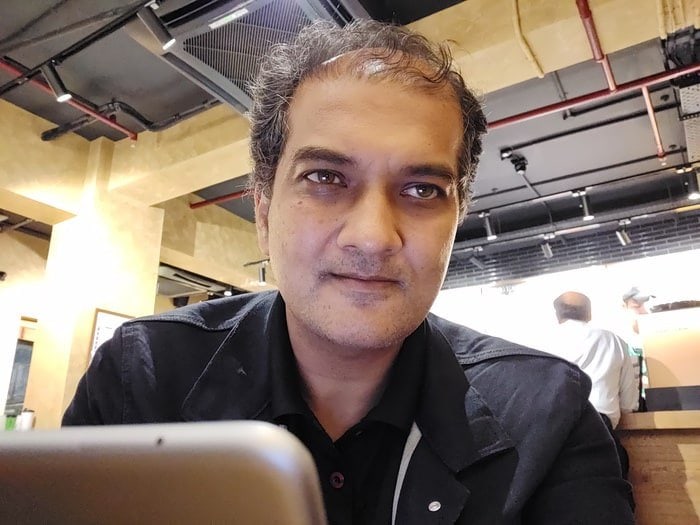 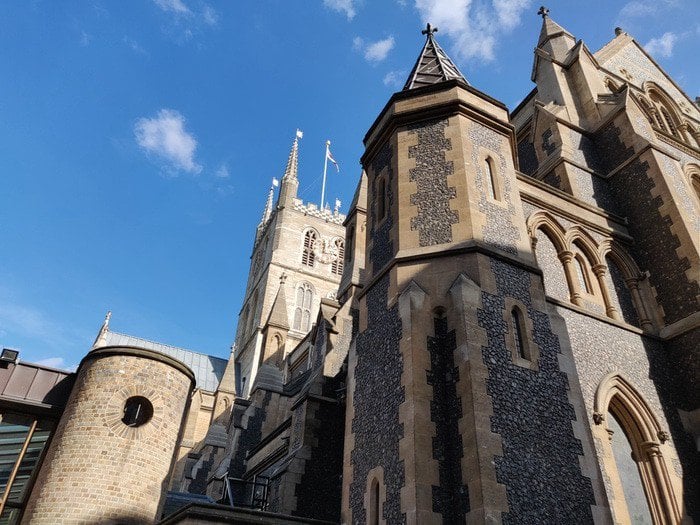 No, we would not place the OnePlus 6’s cameras in the same class as the ones on the Galaxy S9, the Pixel 2, the P20 Pro or the iPhone X, but it is easily among the better shooters in its price segment, which is saying something. We, however, feel that the cameras while good, are still some distance from greatness. We would also like OnePlus to do a little more with the camera app – the app now seems far too basic for a device that is aspiring to be a front-runner in the camera stakes.

It is, however, not completely smooth sailing. For marring the general smoothness are eccentricities that are becoming part of the OnePlus experience. There were times when the handset would heat up unexpectedly, even though we were not really pushing it to its limits. The fingerprint scanner sometimes would not recognize our fingers. And while face unlock is lightning fast – easily among the fastest we have seen – it still unlocks the phone even when your eyes are closed. We also had a couple of occasions of the phone restarting during calls. We also found odd lags in the middle of routine functions – the phone would seemingly pause for a microsecond and then carry on. Finally, automatic brightness is best turned off, as it can be a little odd – abruptly brightening or darkening the display even without any change in ambient light. Given our experience with OnePlus, however, it is a fair chance that the company will be rolling out updates sooner rather than later to fix niggles and issues. And truth be told, these are the exceptions rather than the rule to what is generally a smooth experience. 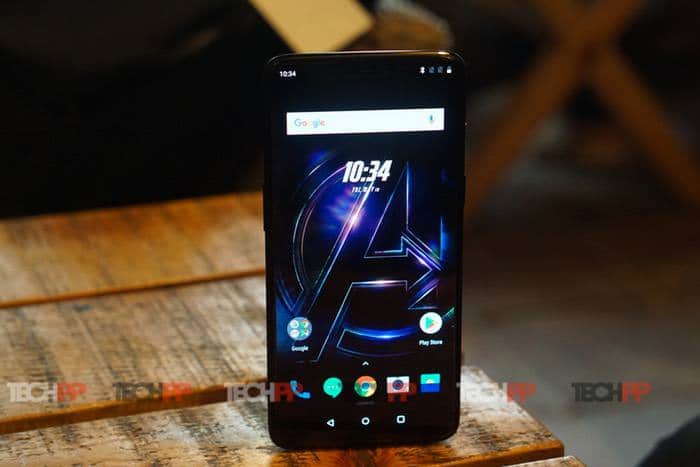 A word about the battery life. Yes, Dash Charge is still around (taking you from 0 to 60 percent in about half an hour) and OnePlus has not gone with wireless charging – the glass back made some believe it would (contrary to popular perception, glass backs are not compulsory for wireless charging and vice versa) – but the general battery life of the OnePlus 6 is a bit on the disappointing side. The 3300 mAh battery will get you through a day, just as its predecessor on the 5T did, but we honestly expected more, given the power management skills of the Snapdragon 845 – is the slightly larger display draining it more, we wonder. The fact that Motorola was able to squeeze out almost the same amount of battery life on its Z2 Force device with a smaller battery and a quad HD display makes us wonder if there is some secret sauce out there that the company needs to invest in or discover.

So, should one get a OnePlus? 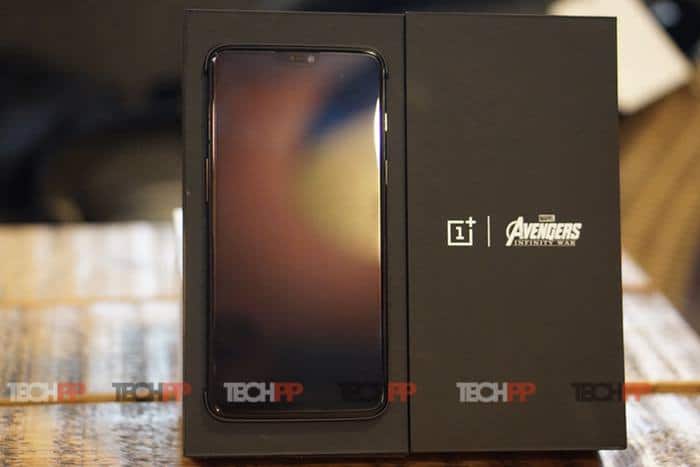 So should you be investing in the OnePlus 6? Starting at Rs 34,999 for the 6 GB/ 64 GB avatar and going up to Rs 44,999 for the 8 GB / 256 GB version (Avenger’s edition), this is easily the most expensive OnePlus device ever. The answer really depends on your existing device. To be brutally honest, the OnePlus 6 is a slight step up from the OnePlus 5T but not a major one in terms of performance – our OnePlus 5T is still purring along smoothly. So if you are not a fan of the notch or the revamped design, you can afford to sit back. However, if you are a person looking for a flagship level device at the most affordable price in town, then the OnePlus 6 is in a zone of its own. Yes, we might whinge about this not being a massive step forward from its predecessor, but even at a slightly higher price, the sum of its parts massively outweigh its price tags. It remains the biggest pain in the neck for any premium Android flagship simply because of its unmatched price-spec-performance ratio. No, we cannot see someone who has a Galaxy S9+ or a Huawei P20 Pro feeling jealous of a OnePlus 6 user. But we can bet our last penny that any person who is in the market for a high-end Android device will almost certainly consider the OnePlus 6. And barring perhaps the Honor 10, it does not even have much competition to reckon with. Those seeking top-end specs at the best possible price ignore this device at their peril.

It might be showing signs of settling. But OnePlus remains a flagship killer.