Permissions on Android are not as well thought out as they are on iOS. One approval could lead to you risking a lot of personal data in the hands of a third-party app. Until now, the answer to this predicament was simply to manually keep permissions in check or just skip on a few features by not granting them. But that too can have fatal consequences since Android’s weak design guidelines have led to apps which refuse to boot if you don’t allow every access they demand.

Is there any way my phone's location can be disabled automatically after a minute since I enabled it? For instance, I need to turn on the setting for Uber but don't want to manually turn it off after confirming the ride. That's when the app comes in and does the job for me.

I’m glad to write, though, that there’s finally a better solution to that conundrum. The prolific developer, Sam Ruston saves the day once again. His new app which is cleverly titled Bouncer lets you configure temporary permissions. So for instance, if you’d like to grant location access to Facebook only while checking in and don’t want it snooping on you all the time in the background, you can set a timer for the permission. Once it expires, Facebook no longer has access to your whereabouts. 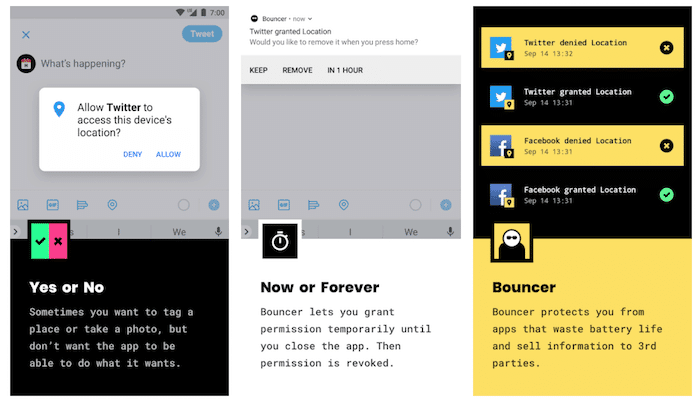 In addition, Bouncer can revoke permissions even as soon as you leave the application making it ideal for operating third-party apps you know you will be rarely visiting. A central dashboard and timeline are available as well where you can monitor all your recently approved permissions and withdraw them without going through heaps of setting pages. Other than using your phone’s Accessibility Services, Bouncer itself doesn’t ask for any permissions. It would be quite an irony if it did, though.

Bouncer is not free, however. You will have to spend a dollar to install it. But if you ask me, that’s a fair amount when we consider what Bouncer offers. Perhaps a bit too fair. The developer has figured a way around one of Android’s most critical shortcomings and until Google brings a similar native feature (which it probably won’t), Bouncer is a must for every Android phone.

Although I should point out that there’s a chance Google might pull it off the Play Store primarily because the company has expressed before its concerns with apps that rely on accessibility services. And Bouncer messes with other apps’ permissions including Google’s own which certainly won’t sit well with the folks at Mountain View.

Was this article helpful?
YesNo
TechPP is supported by our audience. We may earn affiliate commissions from buying links on this site.
Read Next
How to Use Android Phone as Webcam for PC
#android #Bouncer