There’s no denying the fact that there are more Android devices out in the market than there are iOS devices. Contrary to which, is the fact that Apple’s App Store still generates more revenue than Google’s Play Store. And a recent report from Sensor Tower elucidates the above proposition. Just so you know, Sensor Tower is a leading app analytics platform that provides various companies with intelligence services to determine different aspects of the app, the app store, and other related statistics to allow the companies to improve their products and services.

Here’s what Sensor Tower had to say about the growth in the revenue of the Apple’s App Store in the third quarter of this year.

According to the report, the total revenue generated by Apple’s App Store and Google’s Play Store for the third quarter of this year equals $18.2 billion, which is a 22.7% increase over the $14.8 billion generated from the last year’s third quarter. In addition to this, Apple also extends its lead over the Google Play Store with its App Store generating approximately 94% more revenue in this quarter. As a matter of fact, the last time both these stores differed with such a staggering difference in terms of their generated-revenue was way back in the year 2014.

Let’s classify the generated-revenue by both the companies for apps and games separately to get a contextualized overview.

Stats for App revenue and downloads: 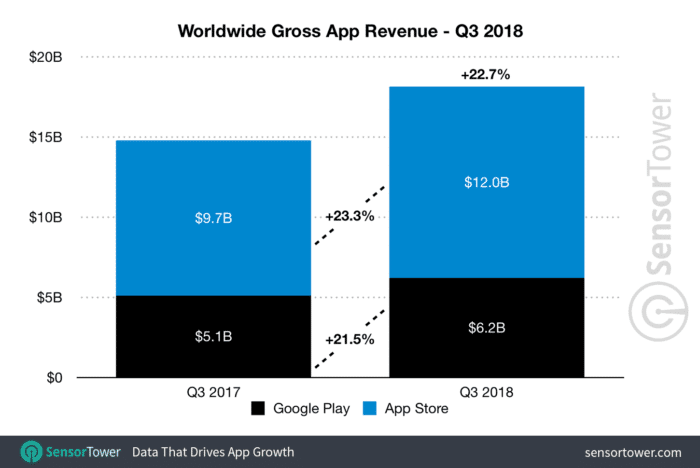 For the third-quarter of 2018, Google’s Play Store generated revenue of $6.2 billion compared to $5.1 billion from last year’s quarter. It also noticed a growth in the number of app-installs by 14.3% which increases the tally of the total number of apps installed from 17.1 billion to 19.5 billion for the last quarter.

On the other hand, Apple records $12 billion for its app revenue generated last quarter, which is a significant increase of 23.3% from the $9.7 billion revenue it generated last year. This equates to a 66% of app revenue generated by Apple’s App Store alone. In terms of app-installs, Apple’s App Store recorded 7.6 billion installs for the quarter, that equates to a 3.1% increase over the last year’s 7.3 billion app-installs.

In between, Netflix becomes the top-grossing app for the third quarter of this year on both the platforms with a staggering revenue of $243.7 million generated from its in-app subscriptions.

Stats for Game revenue and downloads: 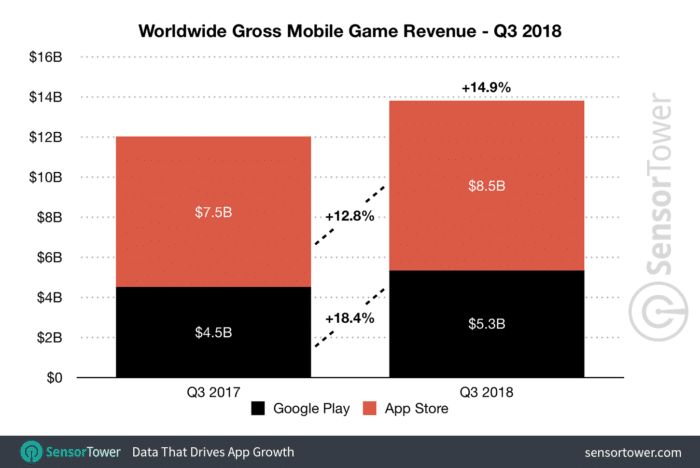 Amidst the millions of apps available on both the platforms, games tend to be among the ones that generate more revenue for the companies.

Both platforms experienced a combined revenue of $13.8 billion with a 14.9% increase from last year’s third quarter. Among which, Google’s Play Store constitutes for an 18.4% increase in the combined overall revenue with an amount of $5.3 billion. Whereas, Apple’s App Store contributed to 62% of the total revenue generated for the quarter with an amount of $8.5 billion.

In terms of the most popular game for this quarter, Honor of Kings by Tencent tops the tally with Pokemon Go at fifth and Fortnite at ninth position respectively.

Note: The above stats are taken from a recent study by Sensor Tower and for the most part are approximated numbers to provide a general idea on the current scenario of the revenue that is generated by both the platforms for the third quarter of the year 2018.

Was this article helpful?
YesNo
TechPP is supported by our audience. We may earn affiliate commissions from buying links on this site.
Read Next
11 Best Drawing Apps for Chromebook [2023]
#app store #apps #netflix #Play Store #Revenues #Tencent