It has been a while since we were held spellbound by a mid-segment smartphone (well, almost three years – we did wax eloquent on the Lenovo Vibe S1 sometime in late 2015). The Honor 8X has had that effect on us. Yes, there is plenty of hardware muscle and spec sheet masala to talk about – the first Honor device with the Kirin 710 processor (which has a lot of AI tricks up its sleeve), 4 GB RAM, 64 GB storage, AI-assisted dual (20+2 megapixel) cameras with stacks of shooting options on the back, a powerful 16 megapixel selfie camera with face unlock, a good 6.5 inch display with full HD+ resolution, dual SIM support with a dedicated memory card tray, 3750 mAh battery, Android 8.1 with Honor’s EMUI on top of it, and a lot of connectivity options too.

But take our word for it, you will be too busy gawking at the frame that houses them innards before you move on to them. For, unlike its predecessor (the very popular 7X), the Honor 8X is anything but mid-segment when it comes to appearance. It is in fact unabashedly premium in that regard, picking up a few tips from the Huawei P20 Lite, which was quite a stunner in its own right. Mind you, this is not that obvious from the front, which follows relatively predictable lines – all display, with a notch and minimised bezels (91 percent screen to body ratio), with buttons and SIM card slots on the sides (volume and power on the right, SIM tray on left), 3.5 mm audio jack (yay) on the base (a little unusual) and a micro USB port (a disappointment for some, perhaps). The edges and sides are curved, giving the phone what many would call a good handfeel, although this is as good a time as many to point out that this is a large-ish phone at 160.4 mm in length – definitely one you will need both hands to use comfortably. 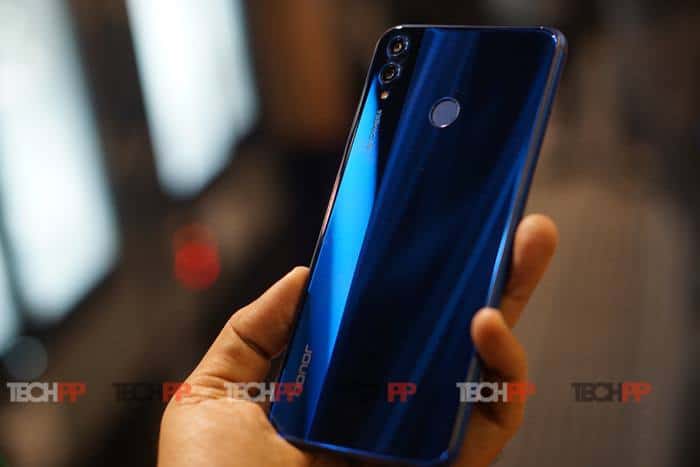 Flip the phone around, however, and you get the closest thing to phone-y psychedelics that we have seen on a mid-segment device. The back of the 8X is all glass and yet is unlike anything else in the market. Honor calls it a “2.5D double texture aurora glass body with a grating effect” – we can say that it definitely does not grate on the eyes. It is shiny, yes, but seeing light reflect in different patterns and shades off it is quite a sight. Honor claims that this is because the back is made from 15 layers – whatever it is, it certainly looks very different and will turn heads.

Counterbalancing this is a thin strip of vertical glass all along the left side of the back, on which you find the rear dual cameras and flash and the Honor branding. This strip does NOT reflect light in fancy patterns but is simple plain glass, and in design terms, acts almost like the spine of a book – providing a stability that contrasts with the hectic activity next to it. We thought Honor had redefined mid-segment smartphone design with the likes of the Honor 9N and 9 Lite – well, this takes it a step further away from the competition in this regard: the likes of the Redmi Note 5 Pro and even the similarly glassy Nokia 6.1 Plus and Moto G6 start looking like Plain Janes in front of this. 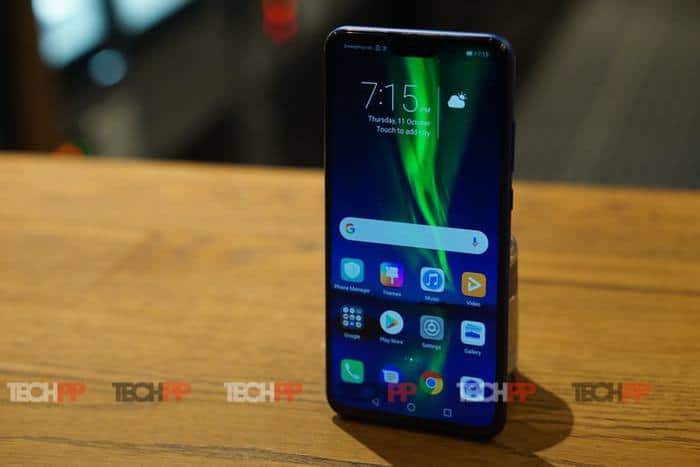 The price of the device (that rhymed!) has not been revealed yet but all indications are that it will be closer to Rs 15,000 than to Rs 20,000, making it a rival to the bestselling Redmi Note 5 Pro, as well as the Nokia 6.1 Plus. Whether it has the performance chops to match those worthies will be revealed in our review, but as of now, we can confess to being dazzled.

Was this article helpful?
YesNo
TechPP is supported by our audience. We may earn affiliate commissions from buying links on this site.
Read Next
Poco F3 GT: Made of Mad-deningly Good Design
#First Cut #First Impressions #hands on #Honor #Honor 8X