Flickr, the most popular image hosting service by Ludicorp has been making a lot of rounds in the news lately. For the most part, it has less to do with the acquisition and more with the limit-cap that is being imposed on the uploading of images.

Founded in 2004, Flickr has gone through a few ownership changes. In the year 2005, Yahoo acquired Ludicorp and Flickr, which led to tonnes of data migrated from servers back in Canada to servers in the United States. Following this acquisition, a lot of changes were made to the platform, like design changes, increase in storage capacity and inclusion of some nifty features. Among these changes, the one that caught a lot of eyeballs was the addition of 1 terabyte of free storage for all Flickr users.

However, things have changed since then – with Verizon acquiring Yahoo in the year 2017, and SmugMug coming in to acquire Flickr earlier this year. With SmugMug coming into the picture, Flickr is imposing a storage cap on the number of images that can be uploaded on its ‘free’ plan. According to the new ‘free’ plan, users can only upload up to a thousand images per account. Besides, users who already have a thousand images on their ‘free’ account will no longer be able to upload new images starting January 8, 2019. In addition to that, Flickr will start deleting photos (oldest to newest) until the count gets reduced to a thousand, starting February 5, 2019.

With all that happening, users are left out with only two options – either to upgrade to a paid plan (starting $50 each year) or migrate to some other photo sharing service. In case you decide to upgrade to a Paid plan, Flickr has some welcoming changes in addition to unlimited storage, like an uninterrupted ad-free experience, analytic tools to understand user statistics, ability to upload videos (up to 10 minutes long), etc.

Although upgrading to a Pro plan might seem a good option for some, it may not be the same for others. In which case, some users might want to migrate to other image sharing services to store and manage your photos.

For which you can either download all your Flickr photos and then upload them to any other service or use a migration tool which would take away the hassle of doing the entire thing manually.

If you opt to go the manual way, you can use services like – Downloadair, FlickrDownload, or Flickr Downloadr. Using which you can download all your Flickr images including metadata, and then upload it to another service of your choice. A thing to note here is that depending on the number of images you have on your Flickr account, it might take a lot of time to just download them. Not to mention, the need for going to another service and uploading the entire thing.

However, if you do not wish to go that path, you can use a simple third-party service, called PicBackMan, which takes away the hassle of downloading and re-uploading all the images yourself and instead makes it really easy to migrate all your photos from Flickr to another service of your choice. The following steps can be taken if you wish to migrate using the PicBackMan tool – 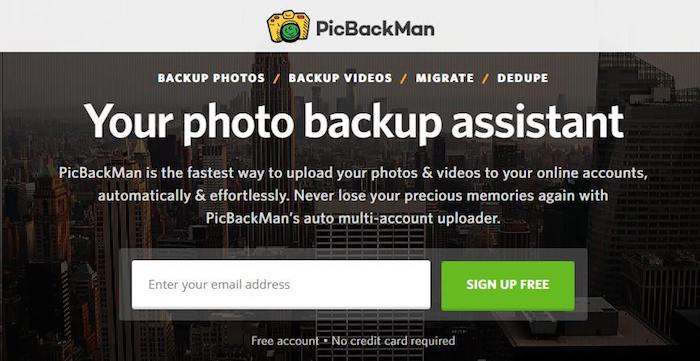 1. Open a browser and head to this website.
2. Sign Up for the service and hit the ‘Download PicBackMan’ button (available for Mac and PC).
3. Once Done, open the app and log in using the account you just created.
4. After that, go to the ‘Account’ tab, log in, and authorize both accounts – the Flickr account, and the account that you wish to migrate your photos to.
5. Next, tap on the ‘Migrate’ tab. Here you get two options – ‘Choose Account to migrate’ and ‘Migrate with MigrateMan’. You can migrate using either of these options, but if you do not wish to spend a lot of money and cannot content yourself while the app takes longer to migrate, you can go with the free option, ‘Choose Account to Migrate’.
6. Hit the ‘Choose Account to Migrate’ button, and choose the account whose photos you would like to migrate.
7. After that, select any of the photo sharing services that you would want to migrate your Flickr photos to like Box, Dropbox, Facebook, Google Drive, Google Photos, One Drive, etc listed next to your Flickr account. Alternately, you can also select the monitor icon – which will download all your Flickr photos directly to your computer.
8. Hit the ‘Migrate’ button.

Now just sit back and relax!

Depending on the number of images you have, the migration process can take time accordingly. In case you’re in a hurry or have tonnes of photos, you can go with the ‘Migrate with MigrateMan’ option, which allows for more than 5000 image uploads/downloads.

Now that, migration is taken care of, and you do not wish to upgrade to a Paid plan, here are some suggestions on other photo sharing services that you can use:

One of the best alternatives to Flickr, this Toronto based startup provides an amazing platform for amateur and pro photographers to share their work with other people. In addition to sharing photos, 500px also provides professionals with a platform to build a portfolio for themselves which can be leveraged to sell their work on the marketplace. Talking about design, the grid album layout on the 500px looks similar to that of Instagram. Apart from design, another common feature that it shares with Instagram is the option for direct message, which can be used to message and communicate with people directly. However, this feature is in beta mode at moment and is expected to be released soon.

Imgur is another popular image sharing service on the internet, which used to be home for some of the most viral memes on the internet. It is a social platform in itself and has a tonne of images on its homepage. These images are listed based on the ranks, which are decided using the number of upvotes/downvotes or favorites received by the users. The best thing about Imgur which a lot of people like and tend to return to the service is that unlike other photo sharing services it does not require users to sign up or log in to access the images.

Coming from a company that runs the most common and highly used search engine, Google Photos, undoubtedly, is the most commonly used platform for storing images or videos on the internet. It has a well-organized gallery which is curated by itself accordingly to provide you with an album for different images. The service is absolutely free and supports images up to 16MP size and videos up to 1080p resolution, exceeding which you might need to shell out some cash and upgrade to any of the paid plans.

For a handful of you, who have the tendency of deleting their unused, here are some steps that you can follow to delete your Flickr account-

Update
As of February 7, 2019, Flickr has extended its deadline to delete user’s photos exceeding the 1000 limit imposed earlier. That means, users now get one more month, until March 12, to choose between either downloading the exceeding images and finding another storage platform or upgrading to their paid plan. According to the company, a huge number of downloads throughout the week put a lot of strain on their servers, which caused some technical issues, and indeed lead them to extend the deadline further.

Google Pixel 4 No Longer Allows You to Store Your Photos in…
How to Add a Watermark to Your Photos on the iPhone
How to find which of your iPhone photos used Deep Fusion
How to Download Android Apps on Windows 11 Right Now [Guide]
Smart Home Security: Absolute Guide to Smartly Secure your…
Slow Phone? Ultimate Guide to Speed Up Your Slow Android