Almost three years after it first saw the light of the day, the iPad Pro has finally got its much-awaited design refresh. Yes, there had been a tweak in terms of display size, with a 10.5-inch option being introduced in 2017, but by and large, the iPad Pros had been slightly more svelte and much more powerful variants of the “plain Jane” iPads. That has changed with the latest installment of what many call Apple’s computer wannabe. They come in two sizes – with 11 and 12.9-inch displays – and there is absolutely no way in which they can be confused with any of their predecessors. 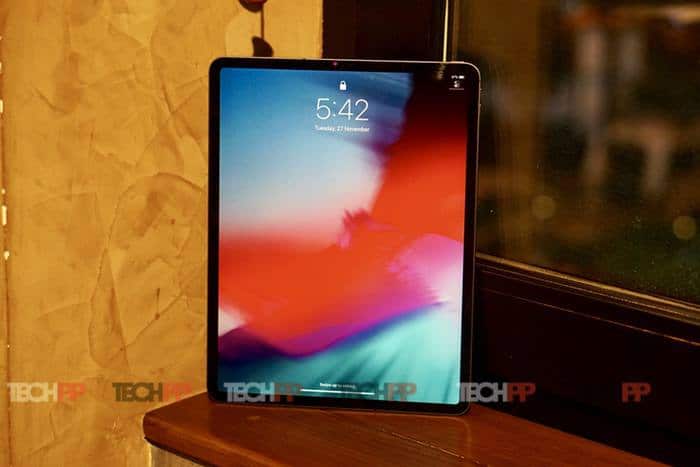 The biggest reason for this is the display itself. For one, there is no home button beneath it (a great chance for us to replay our tribute to the Home button). For another, the bezels around it have been trimmed. Notwithstanding all the talk about edge to edge displays, the fact is that there are bezels around it, although they are almost of equal width relatively narrow by tablet standards. We are not complaining about their presence – unlike phones, you cannot keep your hands off the front portion of the device while holding it, and the bezels do let you keep your fingers off the display to an extent.

The absence of the home button and the narrower bezels do make the new iPad Pros incredibly compact – we got the 12.9-inch variant and actually mistook it for its 11-inch counterpart. No, it is not tiny by any means but neither does it scream “large, not economy size” like its similarly sized predecessors. And it shows in the numbers – the new iPad Pro 12.9 measures 280.6 mm x 214.9 mm in length and width and at 5.9 mm, is actually thinner than most smartphones out there. Contrast that with the 305.6 mm length and 220.6 mm width of the 2017 edition and its thickness of 6.9 mm. At 633 grams, the new iPad Pro is also lighter – the 2017 variant was 692 grams.

It might be lighter and slimmer, but the latest iPad Pro is no delicate darling. In terms of designs, its sides have gone back to the original iPad, with straight rather than curved sides. It gives the device a slightly more “boxy” look. Some might not like it, but we actually prefer it, as it simply seems to indicate a better distribution of weight. The sides might be more spacious but there is no room therein for a 3.5 mm audio jack, although there is a tiny panel on the right-hand side which lets you attach the new Apple Pencil to it and charge it wirelessly. There are four speakers, two on the top and two at the base (along with woofers and tweeters in corners), helping the iPad Pro retain its reputation for some of the best sound in tabletland, and between those two speakers at the base is one of the biggest changes in the new iPad Pro – the USB type C port, which can also be used to charge an iPhone should the need arise (all you need is yet another accessory – a USB C to Lightning connector). The back is one plain sheet of metal with a single 12.0-megapixel camera jutting out from the top left camera with a flash below it. On the lower portion of the back is the new magnetic connector to the Smart Cover and other accessories. 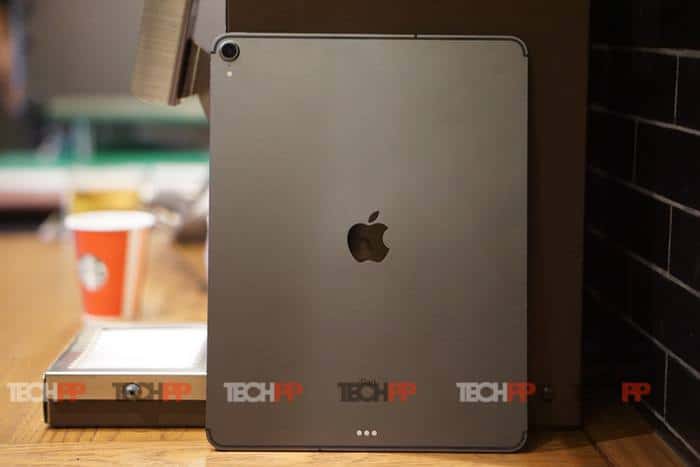 The absence of the home button on the front has some interesting repercussions – thanks to the symmetrical bezels all around, there is no way of knowing which side is top and which is the base. Why is that important? Well, because with Face ID being the preferred way if unlocking the new iPad, and the TrueDepth camera being located at the top, the fastest unlocks come when you are holding the iPad upright in portrait mode. Yes, it can unlock using your face even in landscape mode and even when it is upside down (although registering for Face ID takes a bit longer, as the camera has to perhaps get more data), but it just seems to take a slight bit longer. What’s more, we often found our hand covering the front facing camera when he held the iPad in landscape mode. Perhaps the cameras could have been outlined more clearly, although these are early days and we did see Face ID becoming increasingly speedy with the passage of time on our iPhone X. 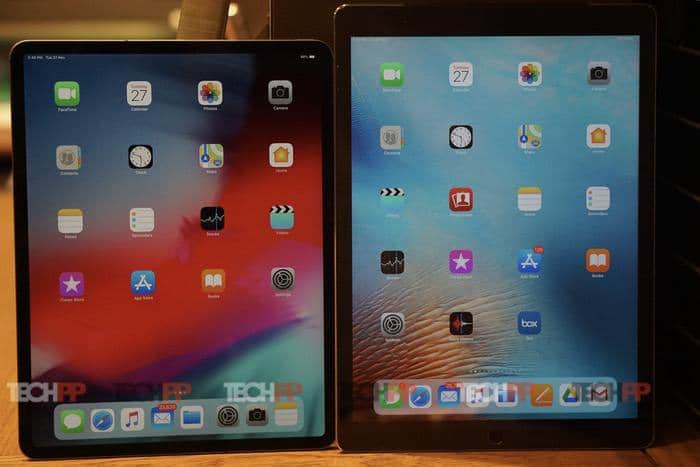 There has enough been written about the specs of the new iPad Pros, but the two parts which we think are really going to make a massive difference are the display and the processor. The display is a liquid retina one, similar to the one we saw on the iPhone XR and while that may annoy those who worship on an AMOLED altar, we honestly are very impressed by what we have seen so far – it is a True Tone display, has great contrasts and is bright enough to be easily viewable even in bright daylight, although it retains the same 2732 x 2048 resolution of its predecessor. Jargon aside, it seems a clear step up from the iPad Pro of last year in terms of brightness and sharpness. Then there is, of course, the A12x Bionic processor, which Apple claims match the chips seen in the best notebooks. Well, it certainly does seem to set a blistering pace so far as apps and games seem to load discernibly faster. The camera on the back remains the 12-megapixel one we saw on the 2018 iPad Pro – 12-megapixel with f/1.8 – but we bet people are going to be more interested in the portrait and Animoji magic that can be worked from the 7-megapixel front-facing camera. And of course, Apple insists that battery life remains in the vicinity of ten hours, with the additional benefit of being able to charge an iPhone from that USB type C port (additional cable/adapter you will have to buy alert). Making all this tick is Apple’s iOS 12 which is perhaps its most tablet-friendly OS ever, complete with a gesture-based interface to compensate for the loss of that home button. 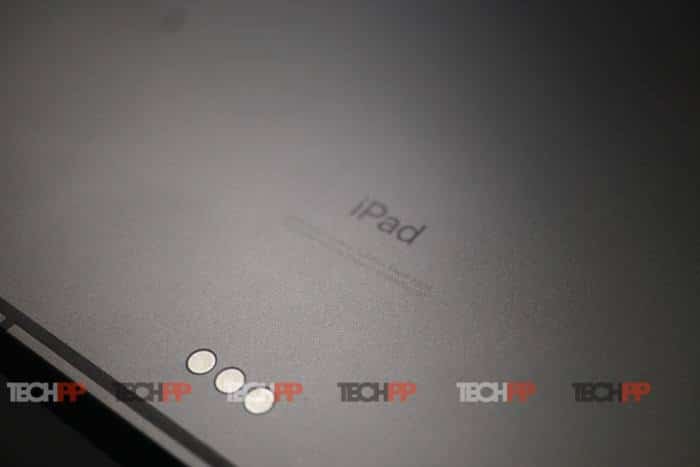 It looks and feels different from any iPad we have seen. And with a starting price of Rs 89,900 (for the 64 GB Wi-Fi only model), much more expensive too. But as in the case of the new iPhones, perhaps what is going to define the new iPad Pro is its sheer turn of speed. The bells and whistles are all very fine, but at the end of the day, this is the device Apple is pitting against computers, and that price tag means that the price edge that its predecessors enjoyed is no longer available to the new iPad Pro, which is now fishing in high-end notebook waters (add a Smart Keyboard cover and an Apple Pencil to the equation and a base iPad Pro’s price zooms into close to Apple’s own MacBook Pro territory). It has the looks and the specs and perhaps even the accessories, but just how well it fares both as a tablet and a computer will be revealed in the coming days. Stay tuned for our review.

Was this article helpful?
YesNo
TechPP is supported by our audience. We may earn affiliate commissions from buying links on this site.
Read Next
Best Places to Buy Refurbished MacBook or Mac [2023]
#apple #First Cut #First Impressions #hands on #iPad Pro #iPad Pro 2018