The computer that got into our lives

Those were the words that concluded perhaps the greatest tech ad of all time – the epic “1984” ad for the Macintosh. Although the ad itself was released before the launch of the Macintosh, January 24 marks the official day of the arrival of the computer that according to many people made computers a part of our everyday life. It was not as if computers or even personal computers did not exist before the Macintosh. They did. But thanks to the marketing and communication campaign around it, the Macintosh made news in a manner that no other computer had. And thanks to its ease of operation, it did pave the way for the computer becoming a mainstream device rather than one restricted to the geek brigade. 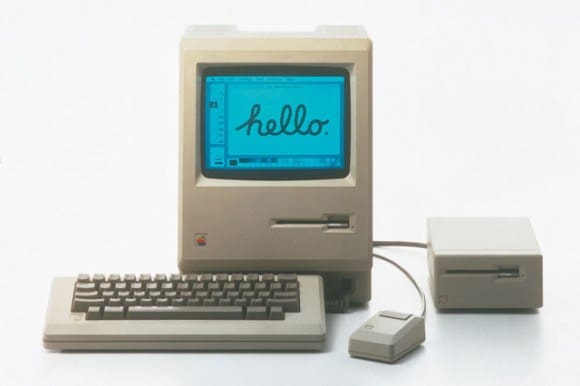 So on the 35th birthday of this iconic device, here’s a look at some amazing facts about it:

Named by Apple, after an Apple…

Let’s start at the beginning – why was the Macintosh called a Macintosh? Well, it was named after a kind of Apple that grows in Canada – the McIntosh, which was the favorite Apple of one of the people behind the computer, Jeff Raskin. Why wasn’t it called the McIntosh then? Well, there were some copyright issues with that term, so the Apple team settled on Macintosh.

…but it was almost “biked”!

And well, it was almost not called the Macintosh either. Evidently, some members of the Apple team wanted to change the name of the computer to Apple Bicycle (yes), inspired by Jobs’ description of computers as “bicycles for the mind” in a popular interview. Fortunately, better sense prevailed.

The epic 1984 ad might have officially told the world about the coming of the Macintosh. But talk of it is first believed to have surfaced when technology columnist John C Dvorak talked about a mysterious “Macintosh” project in an issue of InfoWorld dated February 7, 1983 in an article rather interestingly titled “Meditating on the fruit-tree fable.”

In the beginning, was the Macintosh 128K…

Apple went official with the news of the Macintosh when it formally announced it in October 1983. It was referred to as the Macintosh 128K. The company released an 18-page brochure about it in various publications in December 1983.

All right, so you know we were going to mention this – the legendary 1984 ad was made by award-winning director Ridley Scott, at a budget of USD 1.5 million. The ad was written by Apple’s ad agency, Chiat/Day, and was aired during the third quarter of the Super Bowl XVIII on January 22.

Making a lot of News(week)

Everyone remembers 1984 by Ridley Scott. But that was not the only marketing effort by Apple – the company purchased all 39 advertising pages of a special edition of Newsweek, which needless to say, cost a pretty penny – in fact at USD 2.5 million, that cost more than the 1984 ad!

“Hello, I am Macintosh…and Steve J is my daddy!”

The launch of the Macintosh was marked by Steve Jobs taking the machine out of a bag (stressing how incredibly small it was for a computer, although it did weigh a very hefty 17 pounds), and well, then the Mac itself gave a speech:

“Hello, I am Macintosh. It sure is great to get out of that bag. Unaccustomed as I am to public speaking, I’d like to share with you a maxim I thought of the first time I met an IBM mainframe: Never trust a computer you can’t lift. Obviously, I can talk right now, but I’d like to sit back and listen. So, it is with considerable pride that I introduce a man who has been like a father to me: Steve Jobs”

Of course, the crowd went wild.

The signs of the Mac times

Every original Macintosh came with autographs from every member of the Macintosh team. These were engraved within the plastic enclosure. 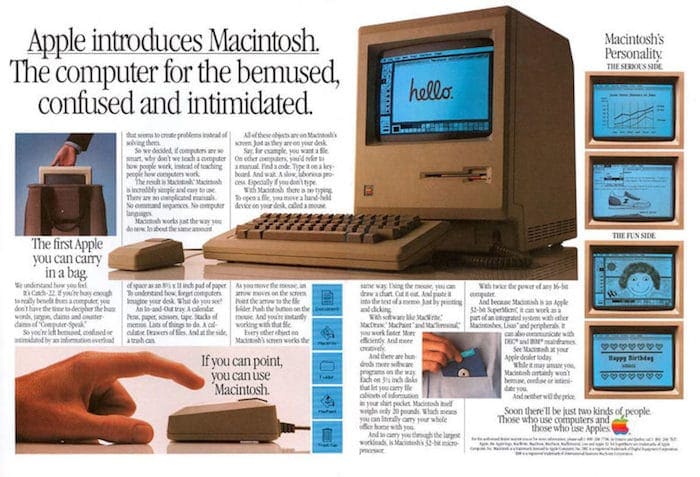 All right, let us get on to the computer itself – it came with a 9-inch monochrome display in an all in one case (the CPU and the display were connected and not separate), had 128 KB of RAM and 400 KB of storage. It was powered by a Motorola 68000 processor clocked at 8 MHz and supported 3.5-inch floppy drives. Its proportions were 13.6 x 9.6 x 10.9-inches and it was priced at USD 2495. Expensive? Well, it was much cheaper than the Lisa!

We got a graphical interface…

Although the Macintosh is credited with making the graphical user interface (GUI) popular, it certainly was not the first computer to come with one. In fact, Apple’s own Lisa computer had a GUI, but a stiff price (USD 9,995) doomed it to failure (fast forward to people complaining of USD 999 iPhones). The Macintosh nevertheless was the first computer to really popularise a GUI.

Just as it made a graphical interface popular, so too did the Macintosh bring the mouse into our tech lives. Again, it was not the first computer to come with a mouse but was perhaps the first popular one to feature the pointing device. Apple was so intent on pushing the mouse that the initial editions of the Macintosh did not even have direction keys on the keyboard.

…and could print what we saw!

The Macintosh was also the first mainstream computer to come with WYSIWYG printing facility – basically, it meant that what you saw on its display was what you got on a printout. Sounds logical? It was not back in 1984. And was a massive deal.

Fizzy, but not really appy!

The Macintosh came preinstalled with two apps to showcase its interface – MacWrite and MacPaint. However, designing apps for the new interface was a challenge and throughout its all too brief life, the Macintosh had a limited number of apps, especially when compared to the IBM PC, its famous rival.

Not enough memory can lead to fat

Although it was hyped as being super fast, the common consensus among many users is that the original Macintosh was handicapped by having too little memory – just 128 KB (Apple co-founder Steve Wozniak would refer to the Macintosh as “a really weak, lousy computer”). So in September, Apple introduced another variant of it with 512 KB RAM. It was nicknamed the “Fat Mac.” Sounds like something from a fast food chain? Well, by January 1986, it was the only Macintosh in the market.

After creating a stir, inspiring arguably one of the greatest ads of all time, the original Macintosh retired in October 1985. Opinion is divided on whether it was a commercial success and whether it actually contributed to the ouster of Steve Jobs in the (slightly) long run, but no one can dispute the impact it had on the computer industry.

And one more thing:

The launch of the Macintosh established Steve Jobs as a great presenter. However, not too many know that before the launch, Jobs was terrified. John Sculley in an essay revealed that Jobs was actually nervous and shaking with fear. “I am so scared,” Jobs is believed to have told Sculley. “I’m not sure I can talk.” Sculley responded by hugging him and saying: “Get over it. You are Steve Jobs. You have told us you are about to change the world. Now go out there and do it.”