With Mobile World Congress (MWC) just a few days from away now, where the first 5G phones are expected to be announced in heaps, Qualcomm has today announced its second generation of the 5G modem. The new modem called the Snapdragon X55 is a successor to the X50 released earlier. However, most of the upcoming 5G smartphones are expected to feature Snapdragon’s X50 modem instead, and it would not be before the year 2020 that we would get to see smartphone manufacturers opting for the X55 modem. 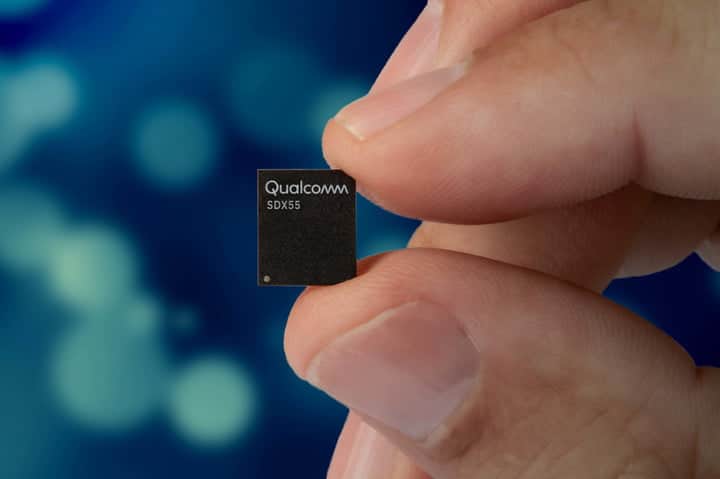 The X50 modem focussed mostly on the smartphones and claimed to offer maximum download speed of 5 gigabits, which is less than the newest offering from the company, which promises to provide as much as 7 gigabits of download speed. In addition to the speed, it also claims to enhance the connectivity among devices and also allow for devices of different categories to be connected together. That surely hints to the fact that we can see the new modem chipset not only on the upcoming 5G-enabled smartphones but also on the Internet of Things (IoT) devices that primarily require various devices to be connected together via the internet.

Apart from faster download speeds and enhanced connectivity, which obviously are one of the most important aspects of the 5G network, the new X55 modem also promises to be more power-efficient. For which, it relies on an adaptive antenna that operates on a sub-6GHz 5G band to reduce the overall power consumption. While being power-efficient, the chipset utilizes the mmWave antenna module, which reduces the overall footprint and eventually, the space required inside the smartphone.

In terms of other advancements, the X55 modem supports Frequency Division Duplex (FDD), which essentially allows the data to be transmitted on both, uplink and downlink at the same time on various different spectrums. It also offers spectrum sharing for 4G and 5G signals to be present on the same spectrum, which would help operators in the initial stages of network transition. Until now, one of the prominent problems with networks has been the loss of signals while a subject moves in the upward or downward direction, however, with the X55 modem, the company looks focussed on getting rid of it using the MIMO beamforming.

Most of the stuff mentioned above seems pretty confusing at the moment, but it promises to offer better speed and connectivity among devices, especially with the IoT. Qualcomm is expected to ship the X55 modem to some of the smartphone manufacturers in the first half of this year, which hints that the first smartphone using the X55 modem could be seen later this year or early next year.

Was this article helpful?
YesNo
TechPP is supported by our audience. We may earn affiliate commissions from buying links on this site.
Read Next
Snapdragon 782G vs Snapdragon 778G Plus: What Has Changed?
#5G #Modem #qualcomm #Snapdragon X55