The world of shrinking bezels and edge to edge displays leave little or absolutely no space for the selfie camera on the phone front. The desire to have a display-covered front has forced brands to think creatively to make space for the front camera. Some brought in the notch, some brought in a punch hole display, some got a drop notch to the party, some even added a whole slide out layer below, but the fanciest of all, hands down, has to be the pop-up selfie camera from Vivo. Vivo first introduced the pop-up selfie camera concept with the Vivo Nex and the brand is now getting its pop back with the launch of Vivo V15 Pro. And at a relatively lower price as well. However, at Rs 28,990, the V15 Pro find itself in the territory of many of the “flagship killer” smartphones in the market today. And when you are surrounded by such tough competition, making a good first impression is absolutely necessary. But does the V15 Pro comes out of this situation like a pro? 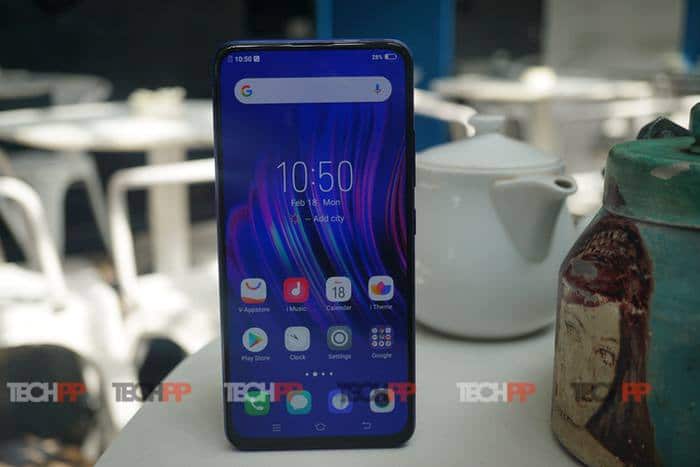 Generally trendy with a touch of unconventional

Glass backs are in.
Color gradient is in.
Shades of blue are in.

And guess what? The Vivo V15 Pro brings all of these three elements to its design language. Dipped in two shades of blue (dark around the corners and light in the middle), the glass bearing back is anything but subtle, and shines. When held on a certain angle, you would be able to see the slanted pixelated lines under the glass that add a bit of texture to the flashy smooth back. The company’s logo is on the lower half of the back as the upper half is very comfortably owned by the camera trio that Vivo has added to the mix. 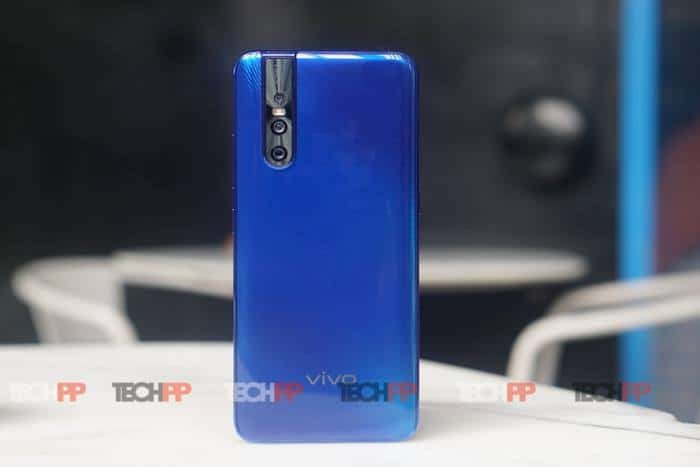 That camera unit on the Vivo V15 Pro is like a centaur of camera units – the one half capsule-like and the other half very comfortably rectangular. It carries a camera pair, then the flash and another camera, and extends right to the very edge of the smartphone and protrudes a little more than usual from the back.

Flip the phone around and a 6.39-inch full HD+ Super AMOLED will stare right back at you. As per Vivo, the V15 Pro comes with 91.64 percent screen to body ratio which leaves very little space for them bezels. But however thin, the bezels still managed to make some space for themselves on the front – while the ones on the top (which house the earpiece) and the sides are pretty slim, the chin comes with a relatively thick one. The fingerprint scanner on the smartphone is buried under the display, one of the many USPs of the device.

An edge to edge display and a glass back that do not really carry a lot of features put a lot of pressure on the frame of the V15 Pro. Fortunately, the shiny blue metal frame of the device carries a number of features without feeling too crowded. The left side of the device carries the dedicated microSD card slot (yes, a dedicated one!) followed by a button dedicated to Google Assistant. The right side houses the volume rocker and the power/lock button. But this is all usual, right? Let us get to the more interesting sides of the frame, the top and the base.

The Vivo V15 Pro comes with a pop-up front facing camera and this sensor pops out of the top of the smartphone. The top also houses the 3.5 mm audio jack. But where do the SIM cards on the V15 Pro go? Well, the dual dedicated SIM card tray is rather unorthodoxly placed on the base of the smartphone accompanied by the speaker grille and a micro USB port. Some might turn up their nose on the presence of the 3.5 mm audio jack and the micro USB port for connectivity purposes but we do not think it is a deal breaker in any way. 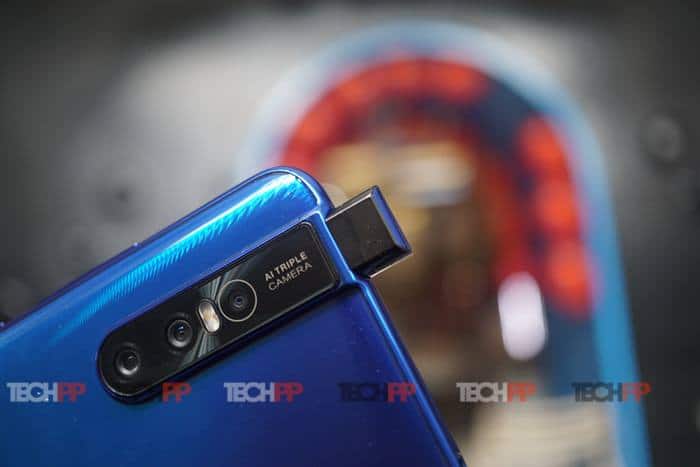 The smartphone measures 157.25 x 74.71 x 8.21 mm and weighs 185 grams – definitely on the thicker and heavier side of the weighing scale but the glass and the metal frame bring the feel-good factor in. And thanks to the protruding camera, the phone will not slip that easily off a table, although the camera unit itself might take some strain and stains.

But the glass back brings its own drawbacks’ with it. It picks up smudges, fingerprints, and dust like there is no tomorrow. The company has bundled a sturdy, mostly transparent cover with silicon covering the sides, with the device. But while the cover looks good standalone, once put on the device, neither look good. What can we say: the sturdiness of the cover and the delicate looks of the phone are not really a match made in heaven, although it surely will keep it safe (even though the cover too picks up smudges). Still, it is good thinking by Vivo to have bundled the phone with a cover (and that too a tough one), because once you buy the Vivo V15 Pro, we think it is going to be a task finding a case of this smartphone, thanks to that pop-up camera. 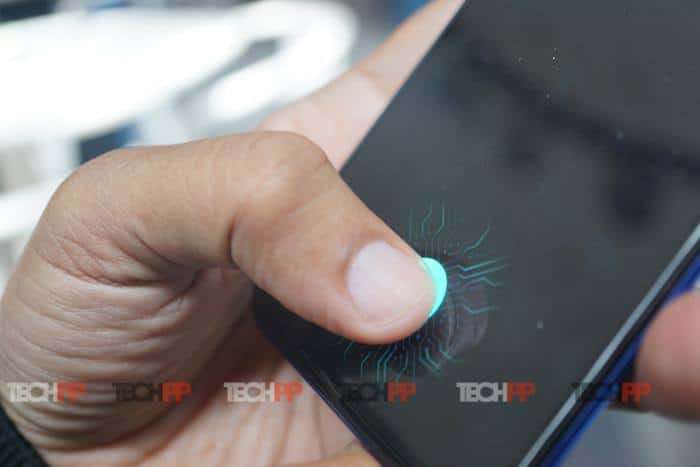 When it comes to hardware, the Vivo V15 sports a full HD+ 6.39 inch Super AMOLED display which carries a 5th generation in-display fingerprint scanner. Vivo has bet its money on a newer processor, the Qualcomm Snapdragon 675, a chipset that comfortably sits in the mid-segment but is comfortably a notch above the tried and tested 660. The CPU is paired with 6 GB and 128 GB onboard storage which can be expanded up to 256 GB with the help of the dedicated microSD card slot.

However, the brand seems to have really thrown the kitchen sink at the camera composition of the V15 Pro. It comes with triple sensors on the back. The main sensor on the back brings a whopping 48-megapixel count to the show while the supporting cast come with 8 megapixels (wide angle, 120 degrees) and 5 megapixels (for depth of field). The popping up selfie camera is not too far behind in the megapixel race and brings 32 megapixels to the table with a 0.46 second pop up speed, as per the company claims – it definitely seems faster than the one we saw on the Nex. And oh yes, the AI card has been played too with features like auto scene recognition and the like.

The phone runs on Android 9.0, topped with Vivo’s Funtouch OS 9. There is a dedicated dual SIM tray and connectivity options include 4G, Wi-Fi, GPS, and Bluetooth. And powering all of this is a 3,700 mAh battery with support for Dual-Engine fast charging – so no, we have no complaints about micro-USB ports. 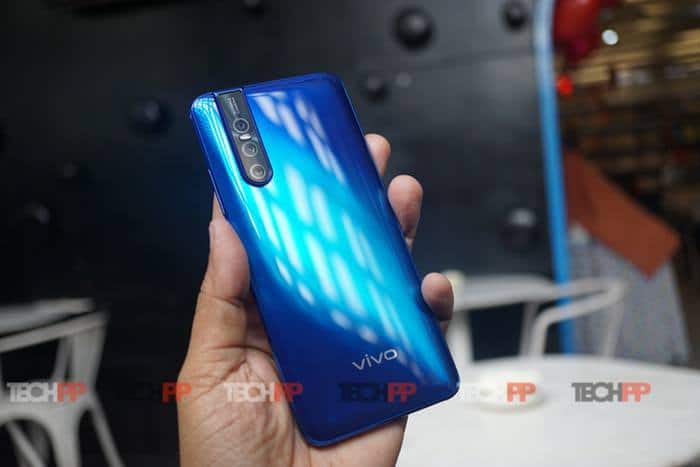 In terms of appearance, it looks like the V15 Pro is a little too inspired by one of its rivals’ design language (the blue just takes us straight to Honor/ Huawei’s line of smartphones). But the smartphone definitely comes with a sackful of USPs. The triple camera unit at the back with a 48-megapixel main sensor, the 32-megapixel pop-up selfie camera, the in display fingerprint scanner, the AMOLED display and do not forget the dedicated dual SIM card and microSD card slots. But with its pricing, the V15 Pro finds itself in the middle of the likes of Poco F1, the OnePlus 6T, the Asus Zenfone 5Z and the Honor View 20, all of which boast better processors and are considered flagship level devices. Are the other features of V15 Pro (and there are a lot of them) good enough to fight off this very formidable competition? Stay tuned to find out in our detailed review.

Was this article helpful?
YesNo
TechPP is supported by our audience. We may earn affiliate commissions from buying links on this site.
Read Next
[Face Off] Vivo T1 vs Redmi Note 11
#First Cut #First Impressions #hands on #Vivo #Vivo V15 Pro