Oppo K1 vs Redmi Note 6 Pro: To flaunt or to function is the question!

Since the launch of the Redmi Note 3 in 2015, the Redmi Note has pretty much been bossing the mid-segment territory when it comes to smartphones. Among those whose challenges it has fought off are the likes of Motorola, Nokia and Asus. But the last year has seen its territory come under attack, initially from the likes of Realme and more recently from Samsung and its M series. And the latest to eye that mid-segment is Oppo. It is not as if Oppo has never had devices in the mid-segment, but they generally were relatively lower specced and followed the offline routine, commanding a premium for the brand. With the K1, however, Oppo has well and truly come to the mid-segment smartphone wars, with a phone that might still seem slightly (and we stress slightly) higher priced than some of its competitors, but which comes with a number of features that others do not. Yes, at Rs 16,990, the Oppo K1 might seem higher priced than the Redmi Note 6 Pro, which starts at Rs 13,990 but make no mistake: these are two devices that are vying for the same consumer, the one that wants to spend something in the vicinity of Rs 15,000. But which one should you go for? Read on to find out. 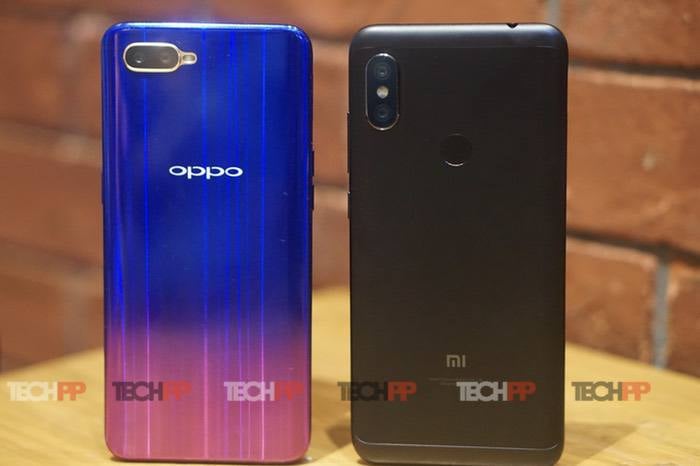 Looks: If they matter, they are not Note-able

The Redmi Note 6 Pro has many gifts – hey, it is a best seller in its own right – but being drop-dead-gorgeous is not one of them. In fact, thanks to the efforts of the likes of Honor, Asus, and Nokia, its classic metal back and glass front are beginning to look almost like a pinstripe suit in a discotheque – quiet and classy, no doubt, but not quite in sync with the place. The Oppo K1, on the other hand, pays tribute to the new found fascination with gradient finishes and glass or glass-like backs, even though we really did not think that the dual camera unit on the back needed a golden tint. Then there is the front too where the water drop notch of the K1 is easier on the eye than the slightly more conventional one on the Note 6 Pro. As we said in our review, the K1’s look is deeply divisive but there is no doubt that it turns heads (and picks up smudges by the tonne too in the process). Anyone wanting a phone with some flaunt value will go for the Oppo K1, as compared to the much quieter Note 6 Pro. 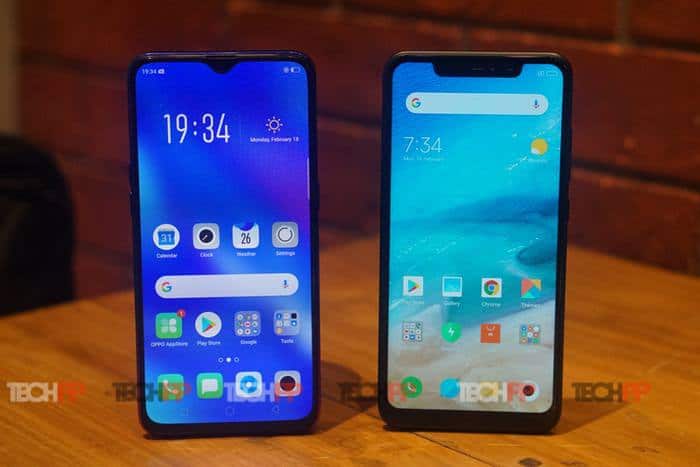 The Oppo K1 does seem to hold the edge when it comes to hardware too. Its 6.41-inch full HD+ AMOLED display is one of the best we have seen in this price segment, and totally outclasses the 6.26-inch full HD+ display on the Note 6 Pro. The K1’s dominance continues with the Snapdragon 660 chip that powers it, which is considered superior to the Snapdragon 636 on the Note 6 Pro. For the purpose of this review, we went with devices that had 4 GB of RAM and 64 GB storage but while both phones come with expandable storage, the K1 has a dedicated memory card slot while the Redmi Note 6 Pro needs to use a hybrid SIM card slot. The Redmi Note 6 Pro pulls back some ground in the camera zone with dual cameras on the back and front, but even there, we can see people looking more favorably at the 16 and 2 megapixel rear camera combination on the K1 as compared to the 12 and 5 one on the Note 6 Pro, and even when it comes to selfies, the 25 megapixel selfie snapper of the K1 provides a formidable challenge to the 20 and 2 megapixel selfie cameras of the Redmi Note 6 Pro. The Note 6 Pro, however, does come with a larger battery – 4000 mAh as against 3600 mAh – but it has a rear fingerprint sensor as compared to the in screen fingerprint scanner on the K1. If specs were all that counted, this would not be a battle, it would be a massacre.

Software: Mi UI is better than yours!

But after conceding ground on the design and hardware front, the Redmi Note 6 Pro gets right back into the swing of things on the software side. Both devices come with Android 8.1 out of the box, but when it comes to the UI running on top of it, we think MIUI 10 is comfortably ahead of Color OS 5.2 on the K1 (minus the ads). It is not as if Color OS is bad – far from it, it, in fact, comes with a number of features. However, it is also a lot more cluttered and not quite as smooth and intuitive as Xiaomi’s own interface. And this difference becomes between the two becomes very significant the more you use the phone. Xiaomi has also implemented gestures far better than Oppo has. This is as big a win for the Redmi Note 6 Pro as the first two rounds were for the K1.

Cameras: It ain’t just about megapixels, you know 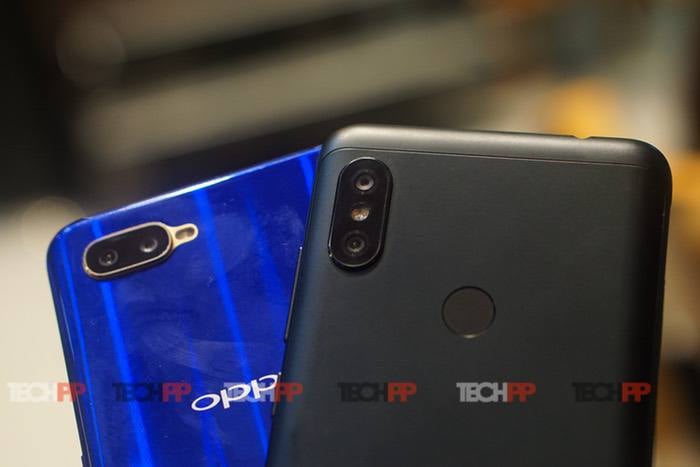 And we suspect it is Xiaomi’s software edge that gives it the edge in the camera department over the Oppo K1. This is a bit of a surprise when you consider that the K1 actually has better rear cameras on paper – 16 megapixel (f/1.75) and 2 megapixel – against the Note 6 Pro, which has a 12 megapixel (f/1.9) and 5-megapixel combination. However, when it came to photography, we saw the Redmi Note 6 Pro being a far more consistent performer. Yes, at its best, the K1 comfortably was the better camera, but it often went wrong as well, while the Note 6 Pro pretty much stuck to a largely decent level. If we really tried with the Oppo K1, we would get better results, but the Note 6 Pro was the more reliable “pick up and point and shoot.” This difference was evident in the selfie camera department where the K1 delivered better results when you let the beauty effects loose, but the Note 6 Pro consistently gave us more realistic color and detail. Both phones claim to use a fair deal of AI in delivering their results, but we honestly felt that Xiaomi had managed to do a better job here The Note 6 Pro’s camera app was also easier to use and we particular felt it handled Portrait Mode better than the K1, offering more studio lighting options, and more bokeh pattern options, although selfie lovers will love the K1’s AR sticker collection! The K1 does score in delivering 4K video but in overall quality and consistency, we think the Redmi Note 6 Pro’s cameras just win this round. Mind you, we think Oppo is just a software tweak or two away from evening up and even winning this round.

Gaming and multimedia: Battle of the Snapdragons, part 1 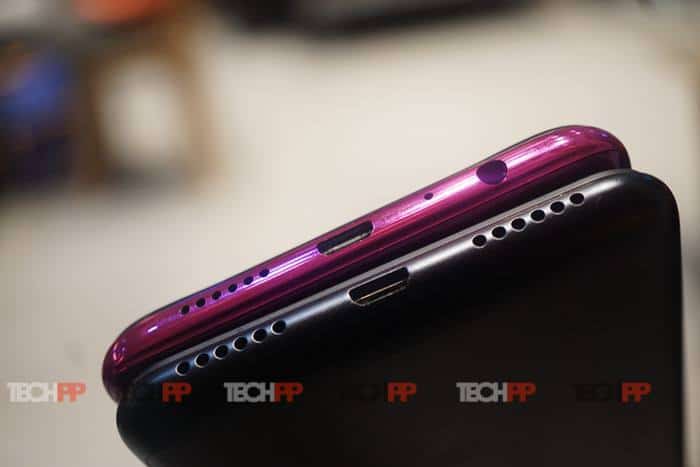 If the software seemingly gave the Redmi Note 6 Pro the camera round, the hardware of the Oppo K1 gives it the clear edge when it comes to gaming and multimedia. Yes, the Qualcomm Snapdragon 636 is a very good performer and especially able in power management, but put it into the gaming ring and it comes a clear second to the Snapdragon 660. We had fewer frame rate drops and lags while playing games like the Asphalt series and of course, PUBG. The difference in performance is however not that noticeable when playing less hectic and graphic rich titles like Alto’s Odyssey or even the likes of Subway Surfer. However, the AMOLED display with the drop on the K1 delivers a much better viewing experience than what we got on the Redmi Note 6 Pro. In terms of sound, there was not much to separate the two devices – the K1 seemed to have slightly better sound at times (in terms of richness), but that could be a matter of opinion. If you are a gaming and film lover, then the K1’s display and processor win this one for it! 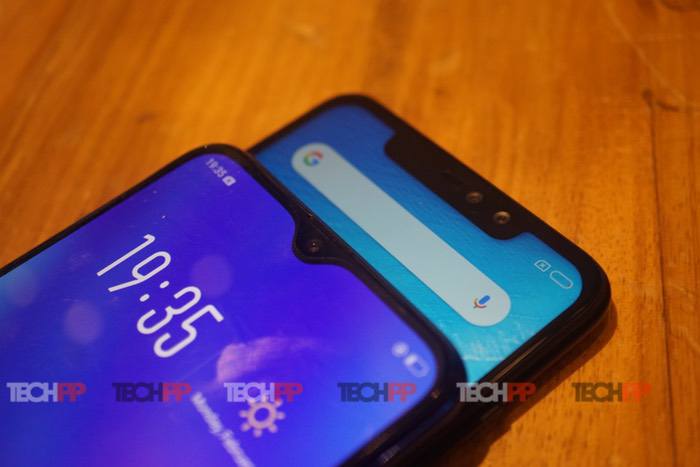 It might get outclassed in the gaming and multimedia zone by the Snapdragon 660, but in most routine tasks, the Snapdragon 636 easily matches it. Whether it was running multiple applications or having a dozen tabs open in Chrome, neither phone broke into a sweat (neither heated up either). Face ID on both devices worked smoothly enough, but we felt that even though the in display fingerprint scanner of the K1 might be more “modern,” in terms of sheer speed and reliability, it was well behind the good old rear scanner on the Redmi Note 6 Pro. Another department in which the Note 6 Pro outpaces the K1 is battery life – the 4000 mAh battery comfortably gets us a day and a half of use, while the K1’s 3600 mAh one has to be used carefully to deliver something similar. We suspect that there is some of the 636’s power management magic at play here as well. Call quality on both devices was similar – good enough rather than exceptionally good. We think the Redmi Note Pro did seem to work slightly better in the call department, but the difference is very small. We think the battery and the speedier fingerprint scanner narrowly claim this one for the Redmi Note 6 Pro.

Value for money: Forget the money, show me the specs! 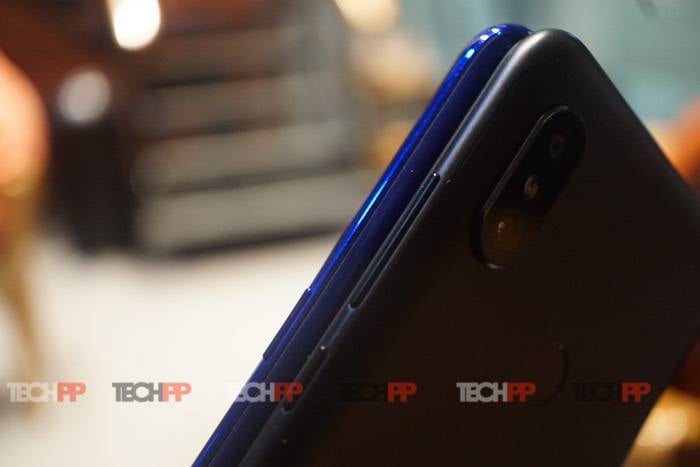 This is where it gets interesting. The Redmi Note 6 Pro is available for Rs 13,999 for the 4 GB/ 64 GB version, while the Oppo K1 charges Rs 16,990 for a similar variant. That said, the K1 definitely brings more to the party for the extra bucks it charges – the AMOLED display, the processor, the in-display fingerprint scanner and the water drop notch. Yes, it might seem more expensive as compared to the Redmi Note 6 Pro, but speaking purely from the perspective of what it offers at its price, we think the Oppo K1 actually pips the Redmi Note 6 Pro here – it has been a while since someone did that to a Xiaomi phone.

Final decision: One of the K or Six of the other Note? 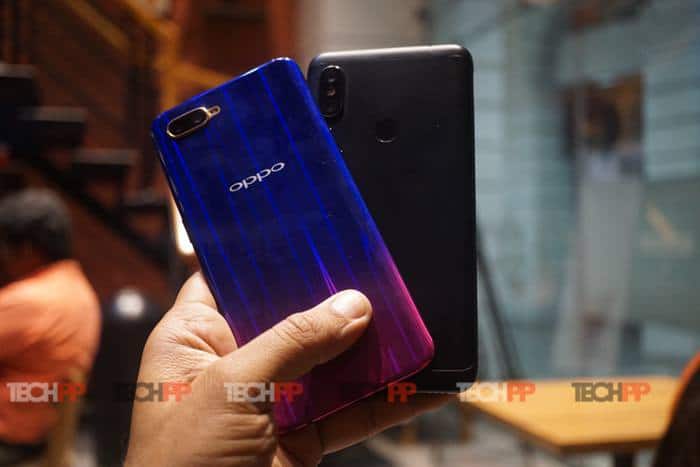 So which one do you go for at the end of it all? The answer pretty much lies in the headline of this review. Those wanting a phone to flaunt will undoubtedly prefer the Oppo K1, notwithstanding its higher price. For the phone brings more to the design and feature table than the Redmi Note 6 Pro, which frankly looks staid in comparison on both fronts. Those who are seeking good old solid functionality will be more comforted by the Redmi Note 6 Pro, which ticks off the basics very ably – be it in terms of camera, battery or general performance. The difference between the two phones is in some ways best summed up by the fingerprint scanners – the one on the K1 is under the display and is definitely more high-tech than the rear fingerprint scanner on the Note 6 Pro, but it is ironically the latter that works better. If you are looking for a powerful phone that has high profile and modern features, the Oppo K1 is a terrific deal. But if what you are looking for is something that is more function than fun, and you are not willing to venture too far into budget land, then the Redmi Note 6 Pro still remains the favorite. It is a classic battle between fun, flaunt and function – those looking for something to show will go for the K1 while those wanting a phone that just works will opt for the Redmi Note 6 Pro.

OnePlus 7 Pro vs OnePlus 7T: To GoPro or GoT is the question
Redmi Note 11T 5G Review: A Redmi Note 11, but not THE Redmi…
Redmi Note 10 Pro and Redmi Note 10 Pro Max FAQ
How to Remap Mac Function Keys and Repurpose them to Trigger…
Lenovo Yoga 6 with Ryzen 7 Review: Flaunt-able, Flexible,…
Unpopular opinion: People do not buy the iPhones JUST to…