It all started with a tweet. Yesterday, Poco, Xiaomi’s sub-brand tweeted that it was the “No.1 Smartphone in the online smartphone market of ₹15k and above in Q4 2018.” A graphic accompanying the tweet showed the Poco F1 with a market share of 22.4 percent. But what was interesting was the phone that was mentioned below it – the OnePlus 6 which had a share of 17.9 percent. 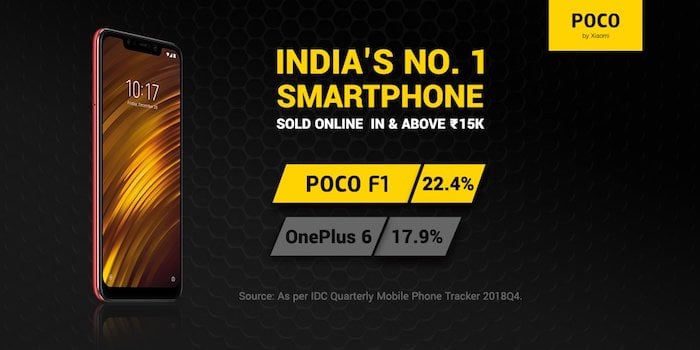 The tweet generated a whole maelstrom of debate. The fanboys of one camp were ecstatic, those of others were cynical. And a number of experts were torn between being surprised and suspicious – some wondered why Xiaomi had not mentioned the OnePlus 6T and only mentioned the OnePlus 6, others at why it had taken the “Rs 15,000 and above” segment for comparison, as OnePlus starts at more than twice that price; still others stressed that the achievement counted for nothing because Apple and Samsung were hardly present in that segment online… there were conspiracy theories galore. And they are still evolving even as this is being written.

First things first – the Poco F1’s achievement is a telling one. And for all the doubts around it, Xiaomi’s new brand’s first device has topped online sales in the Rs 15,000-plus segment. Navkendar Singh, Research Director – Devices and Ecosystem: India and South Asia, IDC, says:

“For a first and the only model, this is a big achievement by POCO, and firmly establishes it as a brand which can give a powerful affordable phone. To that extent, it has been very successful.”

He, however, is quick to add that the OnePlus is not the Poco F1’s main rival. “The story beyond the numbers is that we firmly believe that the customer and user segment of both is very different,” he says. “Poco F1 is being targeted and appeals to power-hungry users wanting to upgrade from Rs 10k to Rs 15/17k, current users of Xiaomi, Motorola, etc who want a powerful, high spec phone but cannot or do not want to spend much. OnePlus is squarely aimed at users who want a more stylish, powerful Android phone but are not getting a good device experience from Samsung flagships or even the previous generation Galaxy lineup. There has been a big gap in the Rs 20k to Rs 35k for the past few years in terms of good options, and One Plus has been able to fully successfully fill that gap. Now OP is, of course, inching to the real flagship range in the Rs 35 to Rs 50k segment with every new launch.”

He also points out that given the online market is around 40%+ (including mi.com), the Poco F1 is really “the highest selling phone above Rs 15k in 2/5th of the total market in one-quarter Q4 2018.” And for good measure adds, “85%+ of the India market is below Rs 15k btw.” Not that the last statistic should affect Xiaomi, which is tops in the smartphone market across the board in India anyway, and was looking to get a foothold at higher price points. 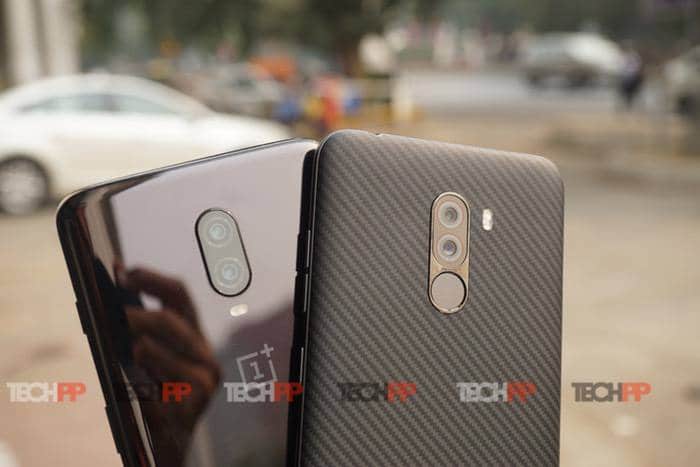 But for all the perceptions that OnePlus and Poco are targeting different audiences, the fact is that Xiaomi’s new brand has had OnePlus squarely in its sights from the word “go” – not just the OnePlus 6, but even the OnePlus 6T which was launched a few months after the F1 (they even trolled the device at its launch venue). The fact that both devices are similarly specced to an extent further lends credence to the debate that the F1 is actually more a OnePlus rival than say, a Moto or a Nokia one. Indeed, some sources claim that the Poco F1 outsold the OnePlus 6 and 6T both online in the final quarter of 2018 – although we have no data to confirm this. What’s more, it is not just OnePlus that the Poco F1 vanquished, but a wide variety of devices, ranging from the Moto G to the Nokia 7.1 and its own cousin, the Mi A2.

It might be too early to predict that Xiaomi has cracked the (slightly) upper price segment puzzle, or if it has actually given OnePlus significant reason to worry about, but with the Poco F1, it certainly has come to the party in a different price zone.

Was this article helpful?
YesNo
TechPP is supported by our audience. We may earn affiliate commissions from buying links on this site.
Read Next
With Football Manager 2023 Touch, Apple Arcade finally has its “killer ...
#oneplus #OnePlus 6 #OnePlus 6T #Opinion #Poco F1 #xiaomi