The sub Rs.15,000 price segment in the Indian smartphone market has become a battlefield and the two main warriors in it are Realme and Xiaomi. The two brands have been launching devices that are not only specced quite strongly but are also priced very competitively, often within a few weeks, or even days, of each other. So far, we had only seen Xiaomi’s Redmi smartphones going against Realme phones but now that Xiaomi has launched the Mi A3 in the market with a starting price of Rs. 12,999, we now see a Mi going against a (Real)me.

That’s because just a day before the Mi A3 was launched, Realme announced the Realme 5, which is right in the Mi A3 alley. There is a price gap between the two, but there are enough similarities for them to be squaring off against each other in the smartphone arena. Which of the two is the superior?

Design: Battle of the blues 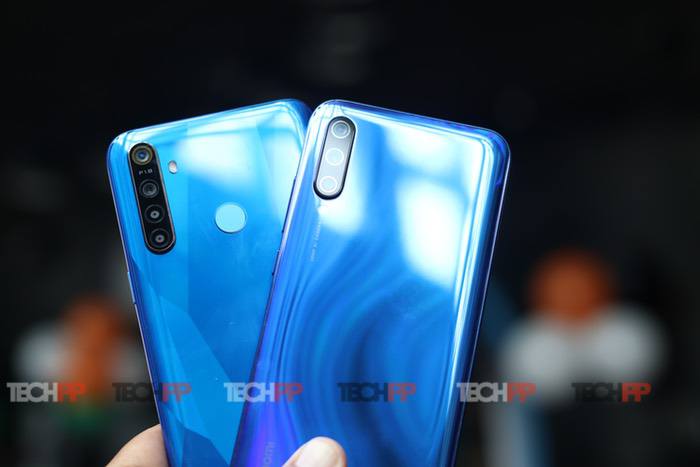 Both smartphones come with trendy design elements. Both have tall displays with thin line-like bezels around it, both have a drop notch housing the front camera and a glossy back with very different and distinct patterns. We received both units in blue variants – crystal blue for Realme and not just blue for the Mi. Although the two share some similar traits, a closer look unveils the differences. The Mi A3 comes with a slightly smaller display as compared to the Realme 5 and the bezels around the display of the Mi A3 are slightly more prominent as compared to the Realme 5. The smaller size of the display also brings in a compact form factor, which honestly comes as a breath of fresh in the age of only tall and taller phones. The form factor also makes the phone sit very well in the palm of your hand.

The glossy electric blue backs of the two phones are also quite different from each other. For starters, the Mi A3’s back is actually glass and comes with Gorilla Glass 5 protection, while the Realme 5 comes with a polycarbonate back. You might not be able to tell the difference by just looking at them but holding the devices will definitely give you an idea. In sheer looks terms, the back of the Mi A3 brings a wavy light pattern to the table while there is a diamond cut pattern on the back of the Realme 5. While the waves are nice and subtle on the A3, the diamond pattern on the realme 5 will grab more eyeballs. The back of the Realme 5 also carries the physical fingerprint scanner, which can be a design minus for some while the Mi A3 brings the fingerprint scanner under its display. 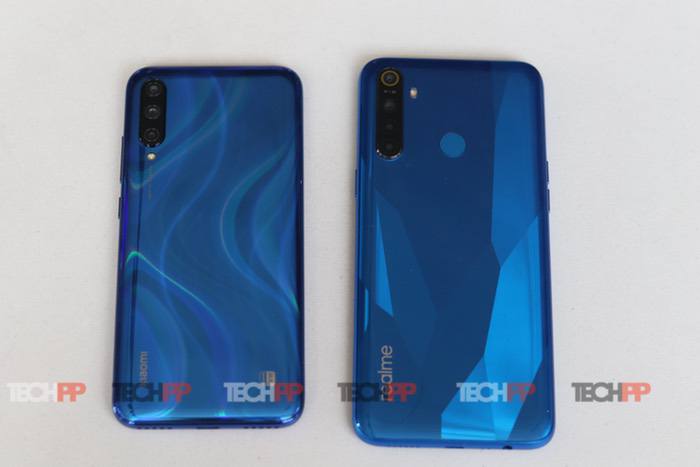 In terms of appearance, we think, the realme 5 looks slightly more attractive than the Mi A3, thanks to the tall display, slightly thinner bezels and the diamond pattern on the back, but the compact form factor of the Mi A3 and the plain glass back (no physical fingerprint scanner) gives that phone slightly more premium feels. They both look good. Take your pick. 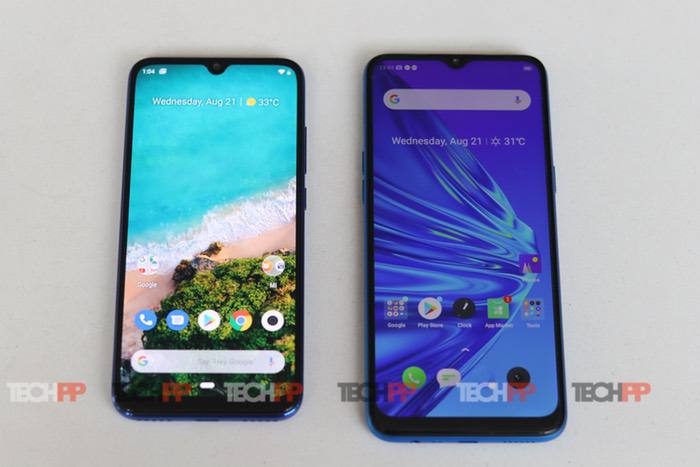 This might look like a one sided battle because the Realme 5 comes with a bigger display as compared to the Mi A3 but the bigger number doesn’t always win all wars. The Realme 5 comes with a 6.5 inch HD+ display with a resolution of 720 x 1600 while the Mi A3 brings a 6.08 inch HD+ display with a resolution of 720 x 1560 to the table, but it being AMOLED is what gives the A3 an edge over the Realme 5 in this department. Also, because the A3 has a smaller display, it has a higher pixel density simply because the pixels on the A3’s display are more tightly packed and arranged as compared to that on the realme 5 – 283 ppi as against 270 ppi. That means slightly sharper graphics and fonts. The Mi A3 also produces better, richer colours and deeper contrast as compared to the Realme 5. Yes, there is roughly a difference of about 0.4 inches between the two display which adds to the overall experience of the phone, but the A3 wins on sheer quality.

Xiaomi Mi A3 vs Realme 5: Android One champ takes on a Real(me) challenger
Read More

The chipset war between the two phones is a tough one, mainly because both the Mi A3 and the realme 5 run on the same processor: Qualcomm Snapdragon 655 coupled with an Adreno 610 GPU. That said, the two phones come with different RAM and storage set ups. We received a 4 GB/ 128 GB variant of the Realme 5 and a 6 GB/ 128 GB variant of the Mi A3. The Realme 5 is available in 3 GB/ 32 GB and 4 GB/64 GB versions too while the A3 also has a 4GB/ 64 GB variant available in the market. Storage on the two can be expanded up to 256 GB. That said, the Mi A3 has a hybrid SIM card slot which means you would have to give up one of your networks, while the realme 5 has a dedicated memory card slot. Still, we think the additional RAM wins it for the Mi A3, although this is a very close round – and those extra RAM GBs cost extra bucks. 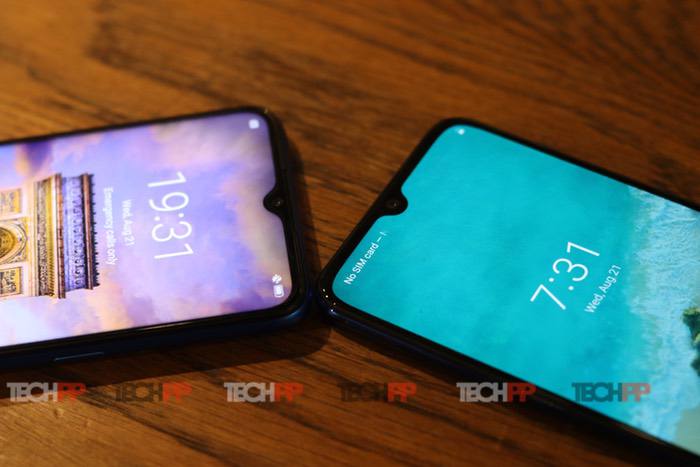 The two phones can handle your daily tasks quite easily. Both can jump from one app to another and sail smoothly through casual games. It is the high end games where both struggle a little, you would start seeing frames drop getting more frequent as you dive deeper into high end games. That said, the Mi A3 did feel ever so slightly more snappy as compared to the Realme 5. The extra RAM, combined with stock Android gives the Mi A3 that extra oomph that the phone needs to get in the lead in the performance department. The sound, both over headphones and on loudspeaker is also slightly clearer on the Mi A3, which again gets the phone some extra points here. 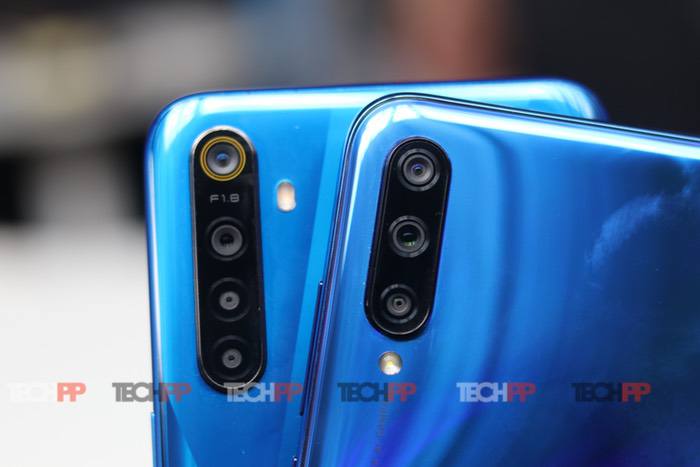 Realme has had a great track record when it comes to camera performance and the Realme 5 is no different. The smartphone punches well above its weight with a 12 megapixel camera… but (yes, there is a big but), the phone just is not quite there as compared to the Xiaomi Mi A3. The Mi A3’s camera captures much more detail and colours reproduced are more realistic as compared to the Realme 5 where the colours are quite saturated. The extra macro lens on the realme 5 is also a little disappointing simply because it does not really deliver. It takes ages to focus on the subject and often delivers blurry results. The story remains the same in the selfie camera arena as well. The 32 megapixel sensor on the Mi A3 easily takes the 13 megapixel sensor on the Realme 5 out. The selfies on the A3 turn out to be more detailed and accurately coloured as compared to selfies on the Realme 5. 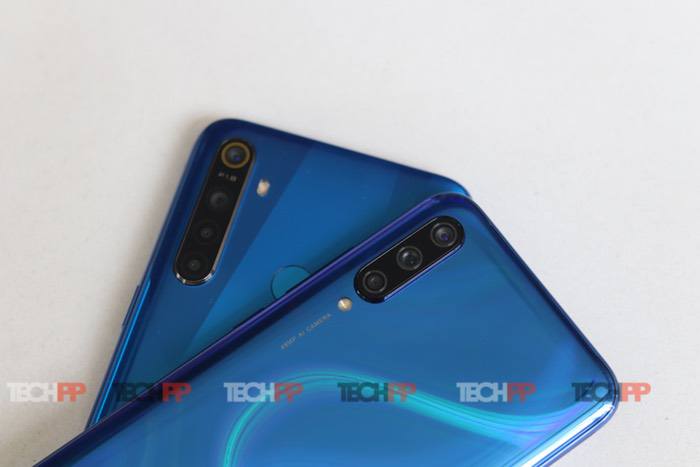 The Mi A3 may be knocking it out of the park so far but it is the battery where the Realme 5 gets back in the game. The Xiaomi Mi A3 is powered by a 4,030 mAh battery. The Realme 5 on the other hand brings a massive 5,000 mAh battery to the table. The battery of the Mi A3 can see a day and little more normal usage. This is where the extra 1,000 mAh of the Realme 5 help it get the edge. The smartphone can comfortably see through two days of normal usage, and you can even enter a third day, if used carefully. The phone can comfortably stay awake for more than a day even with heavy usage. The Mi A3 comes with support for fast charging but does not have a fast charger in the box, which negates this advantage. Both batteries will take some time to get charged, but the Realme will simply last much longer.

Price: On a tight budget? Get Real(me) 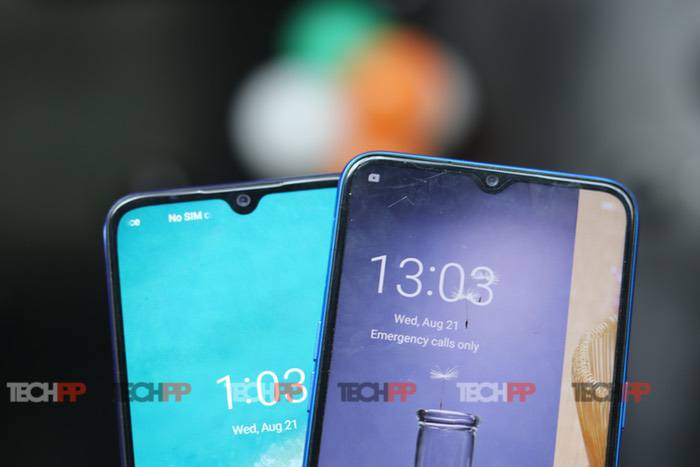 Verdict: A choice between price and performance 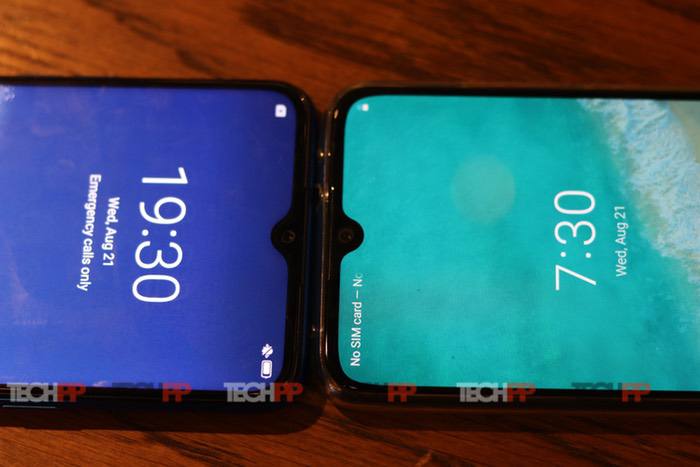 With a score of 6-2 (with one round tying up between the two), the Xiaomi Mi A3 seems to be the clear winner of this Tech Face-Off but (yes, the mighty ‘but’ again), the Realme 5 scores in a very vital department: Price, and does not trail the A3 by too much in others. The affordable price of the Realme 5, four cameras, bigger display, bigger battery and same processor, make the phone a real sweet deal/. One that can give the Mi A3 a run for its money. The Mi A3 does take it away in terms of overall performance and hardware but bring money into the equation and things start getting a little…well, Real.

Was this article helpful?
YesNo
TechPP is supported by our audience. We may earn affiliate commissions from buying links on this site.
Read Next
Redmi Note 12 Pro+ vs Pixel 6a: Comparison
#comparison #Face Off #Mi A3 #Realme #Realme 5 #xiaomi