At the Pixel 4 launch in New York today, Google also announced updated versions of its Pixelbook (Pixelbook Go) and Nest devices (Nest Mini and Nest Wifi) which increase the smart home capabilities with improved functionality when compared to previous-generation devices. The two devices that have received an upgrade are the Nest Mini and Nest Wifi. 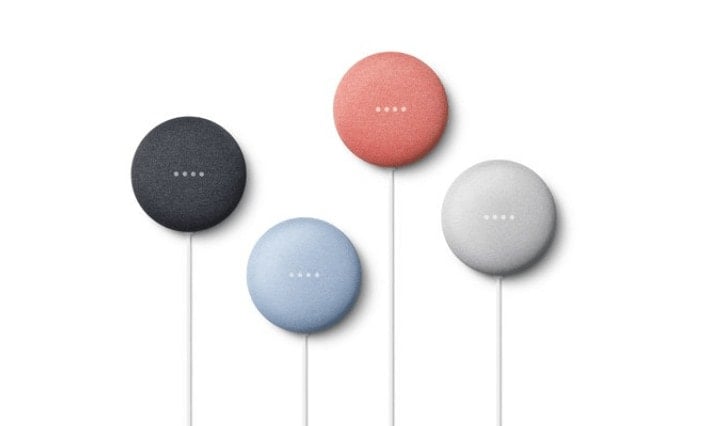 The Nest Mini, apart from being a home assistant, is a speaker at its core and that’s exactly what Google has worked on and improved in this iteration. Google claims that original Google Home users have listened to billions of hours of music on the smart speaker and that is the primary use case in several houses. Hence, the emphasis on improving sound quality. The Nest Mini can output bass that’s twice as strong when compared to the last-gen Home Mini.

The LED’s on the Nest Mini will now light up when it senses motion nearby to indicate where exactly you need to tap in order to vary volume levels. Also, the volume level for your podcasts or assistant replies will now be adjusted dynamically depending on the ambient noise in the background.

Google aims to provide a rich audio experience by letting you connect multiple Nest devices at home to one another. The Nest Mini also has Stream Transfer, meaning if you have a Nest Mini in your living room and you decide to move to your bedroom and have a Nest Mini there too, you can transfer the music from the living room speaker to the bedroom using just your voice. Using Google Duo, one can even call other Nest Mini speakers.

With machine learning, the Google Assistant on the Nest Mini is now more powerful and can understand you better. Of course, the Nest Mini can also be used to control connected devices like lights, air conditioners, and power outlets. The Nest Mini has a fabric exterior produced with recycled plastic bottles which is a great step to conserve nature. It will be available in Chalk, Coral, Charcoal, and Sky color options and will retail for $49 starting October 22.

Nest Wifi is a new and improved version of Google Wifi which was launched way back in 2016. The Nest Wifi essentially plugs into your internet modem and the Nest Wifi point expands the network coverage throughout your house. When compared to Google Wifi, Nest Wifi is claimed to deliver up to 2X more speeds while covering up to 25% larger area. According to Google, a two-pack Nest Wifi can cover up to 3,800 sq. ft. Since the system is modular, one can even add multiple points at a later stage to expand the mesh network.

The Nest Wifi network connects to the Google Home app from where it can be controlled. You can prioritize certain devices, block some websites or devices from accessing the network, and even share your Wifi password with your guests. Along with the functionality of a Wifi router, the Nest Mini comes with another trick up its sleeve, that of a smart speaker. The Nest Wifi has an in-built Google Assistant and a speaker system, which basically means that it is mounted with a Nest Mini. Due to this, you can now say things like “Pause the Wifi for Daniel” or ask “What’s my internet speed?”.

The Nest Wifi has local home connectivity, meaning you don’t need a separate hub to run devices like the Philips Hue Lights and multiple other smart home devices. Google is also working on enabling Thread capabilities which will provide secure connectivity for devices like door and window sensors, locks etc.

The Nest Wifi will be made available in 8 global markets in 2019, starting from the US, where you can pre-order one today and it will go on sale from November 4. A pack with one router and one point will cost $269 and a pack with the router and two points will cost $349.

Was this article helpful?
YesNo
TechPP is supported by our audience. We may earn affiliate commissions from buying links on this site.
Read Next
20+ Best Google Doodle Games You Should Play [in 2023]
#google #Google Nest #Nest Mini #Nest Wifi