Qualcomm Snapdragon 865: All you need to know 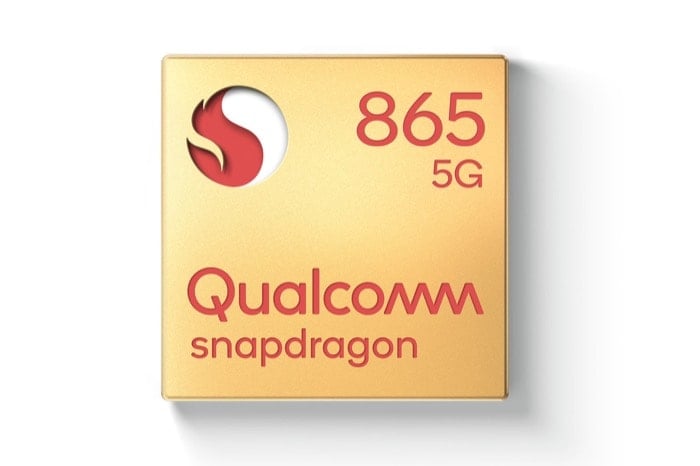 According to Qualcomm, the Snapdragon 865 combines the world’s most-advanced 5G Modem-RF System, the X55, which claims to offer better connectivity and improved performance on the flagship devices. The X55 provides peak speeds of up to 7.5Gbps, which is faster than most wired connection speeds. Besides the modem, the SoC includes the 5th-Gen Qualcomm AI Engine and the new Qualcomm Sensing Hub that combine to offer better intelligence capabilities. The 865 has the Qualcomm Spectra 480 ISP (Image Signal Processor) that introduces new features to mobile photography and videography with up to 2 gigapixels per second speeds. Most importantly, the platform comes with Kyro 585 CPU — that claims to deliver up to 25% performance improvement, and the Adreno 650 GPU — that also promises to deliver up to 25% performance improvement compared to the previous generation. 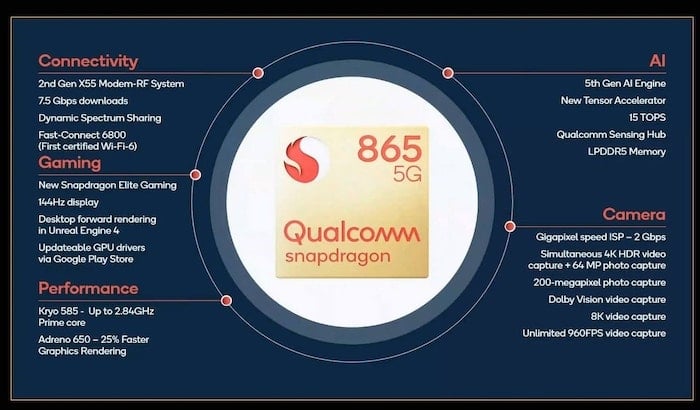 As already mentioned, the Snapdragon 865 platform comes with the X55 modem, which is the world’s first commercial modem-to-antenna 5G solution. The X55 allows for consistent and faster connectivity, with up to 7.5Gbps speeds. It offers support for regions with mmWave and sub-6GHz in both TDD (Time Division Duplex) and FDD (Frequency Division Duplex) frequency, and is also compatible with NSA (Non-Stand Alone) and SA (Stand Alone) modes, along with DSS (Dynamic Spectrum Sharing). In terms of other performance improvements, the 865 mobile platform aids with better WiFi and Bluetooth performance, with the Qualcomm FastConnect 6800 connectivity system improving the speeds (up to 1.8Gbps) and reducing latency, and the Qualcomm aptX Voice helping the platform with support for SWB (Super Wide Band) to deliver better audio with reduced latency. Besides this, the X55 Modem-RF system also allows Qualcomm technologies such as 5G PowerSave, Smart Transmit, Signal Boost, and more to offer better coverage and data speeds with longer battery life.

The Snapdragon 865 packs the 5th-Gen Qualcomm AI Engine and AI software tools that aid with improving performance for camera, audio, and gaming. The new engine claims to deliver 15 TOPS (not TFLOPS) of AI performance, which is 2x powerful than its predecessor. In addition to this, the AI Engine has the Qualcomm Hexagon Tensor Accelerator at its core that offers 4x the performance of the previous generation, while being 35% more power-efficient. The platform also helps to provide real-time translations to translate foreign languages into text and speech, and the Qualcomm Sensing Hub helps the device to be aware of its surroundings to listen to your voice when triggering voice assistant with better accuracy, while still drawing less power. 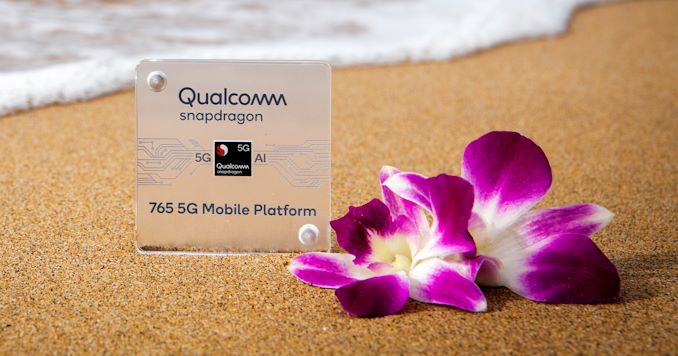 The ISP on the Snapdragon 865 operates at speeds of up to 2 gigapixels per second and offers new camera features such as the ability to capture in 4K HDR, 8K video recording, or up to 200MP photo shooting capability. It also allows users to take slow-motion videos with as high as 960fps and introduces Dolby Vision to capture better HDR footage.

On the gaming front, the new mobile platform aims to improve the performance and offer premium features for an overall better gaming experience. Qualcomm says the 865 is the first platform on Android to support Desktop Forward Rendering, which allows game developers to introduce desktop-quality gaming experience on mobile phones. Apart from this, the platform also allows users to control their graphics driver updates and GPU settings using the Adreno Updatable GPU Drivers that can be downloaded from the app store, as soon as the OEMs release them. Additionally, there is also support for HDR gaming with 144Hz display refresh rate and Game Color Plus to deliver smoother gaming experience and better visuals.

Qualcomm says that its newest top-of-the-line SoC can be seen powering flagship device, starting the first quarter of 2020. Several OEMs including Xiaomi (Mi 10), Motorola, Realme and Oppo have announced that their upcoming flagship smartphones will come with Snapdragon 865.

Disclosure: The Editor of this blog is in Maui, Hawaii, on Qualcomm’s invitation.